TEL AVIV (JTA) — Noam Ofer might have been an unlikely candidate to join Israel’s burgeoning protest movement. At 76, he is older than most of the people who have taken to the streets in recent weeks to protest the government’s handling of the coronavirus crisis. He also doesn’t share the political views of many of the protesters.

But Ofer was there anyway on Tuesday evening marching outside the Tel Aviv home of Israel’s internal security minister in charge of law enforcement, Amir Ohana, who was caught on tape pressuring a senior police official to ban demonstrations against Prime Minister Benjamin Netanyahu.

“He’s trying to illegally shut down protests,” Ofer said. “I came because the minister said that we’re all on the left. I’m on the right. He said we are anarchists, but the only ones creating anarchy are the ones around Netanyahu.”

Ofer’s perspective reflects the deep and bipartisan frustration that many Israelis are feeling about the country’s leadership nearly six months since Israel recorded its first coronavirus case. Thousands of Israelis have been staging loud protests for weeks, mostly outside the prime minister’s residence in Jerusalem, but also in Tel Aviv and other spots across the country. Some commentators have called it the country’s largest grassroots movement since 2011, when hundreds of thousands of Israelis protested the cost of living. 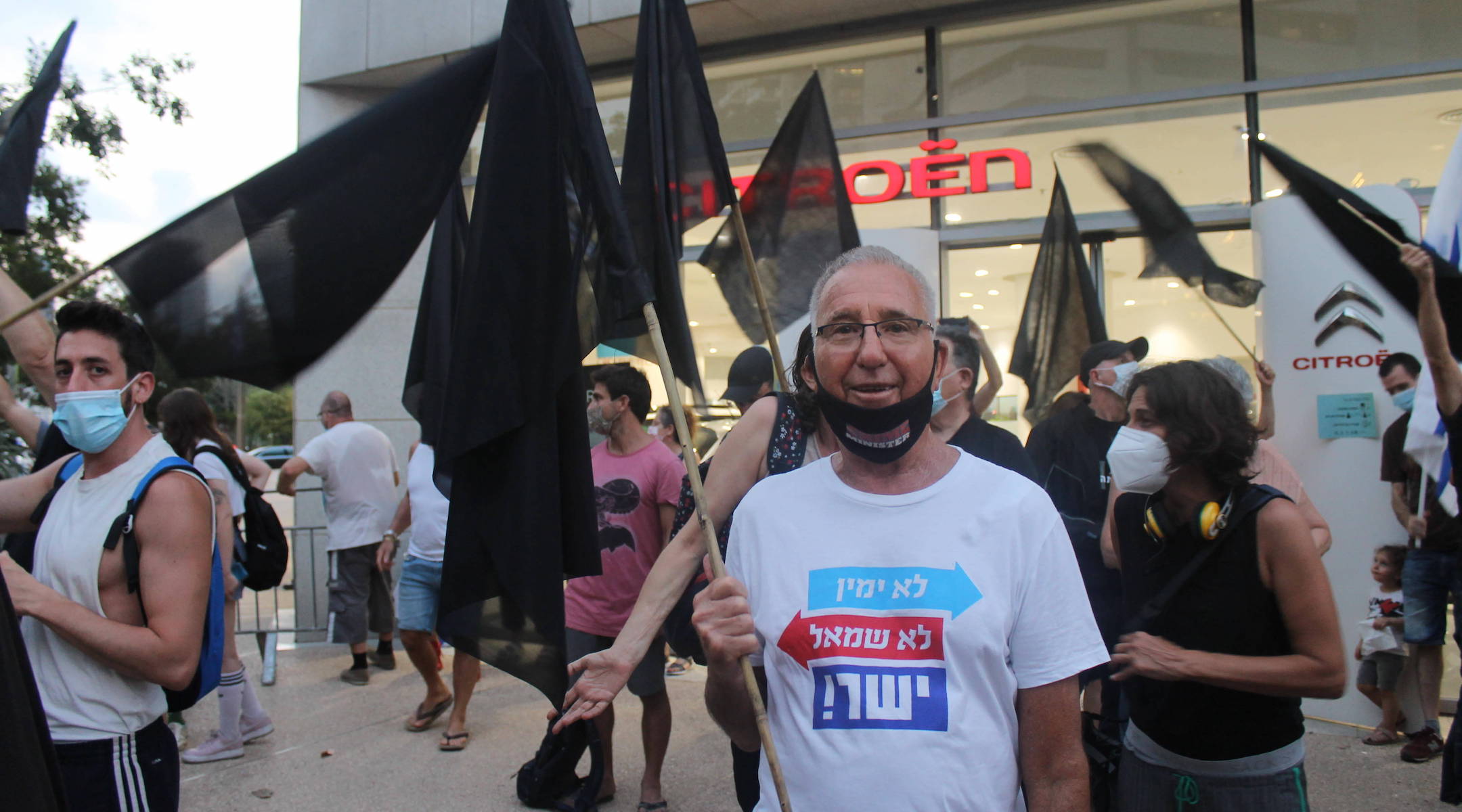 After drawing international praise for how he efficiently imposed a strict and effective lockdown, Netanyahu acknowledged earlier this month to reopening Israel too soon. Cases have risen sharply, restrictions have been reimposed and unemployment is near its all-time high. Stimulus checks from the government have fallen short of their promised amount.

Meanwhile, Netanyahu’s trial on three corruption charges has been delayed for a second time — after Ohana, in his previous stint as justice minister, shut down courts amid the pandemic in March, effectively postponing legal proceedings against the prime minister. The demonstrations have reenergized those who have been calling out Netanyahu in recent years over his legal problems and what they perceive as his goal to weaken democratic institutions like the judiciary.

The result is a movement made up of Israelis across the political spectrum, whose numbers seem to be growing every week. Police were bracing for large rallies Thursday night with the end of the Tisha B’Av observance.

As the protests have widened in focus, demonstrators have faced harsh crackdowns by police, who have drawn criticism for using water cannons and tear gas.

Many at Tuesday evening’s protests, which was organized by the anti-Netanyahu Black Flag movement, said they were incensed by Ohana’s statement to Doron Yadid, the commander of the Jerusalem police district — a recording of which was leaked in the media — that he didn’t “understand why we don’t ban” anti-Netanyahu protests.

“I want to challenge the ruling of the court,” Ohana said, referring to a recent ruling allowing the protests to go ahead, generating widespread anger and prompting President Reuven Rivlin to issue a public statement declaring that the right to protest “must not be harmed.” 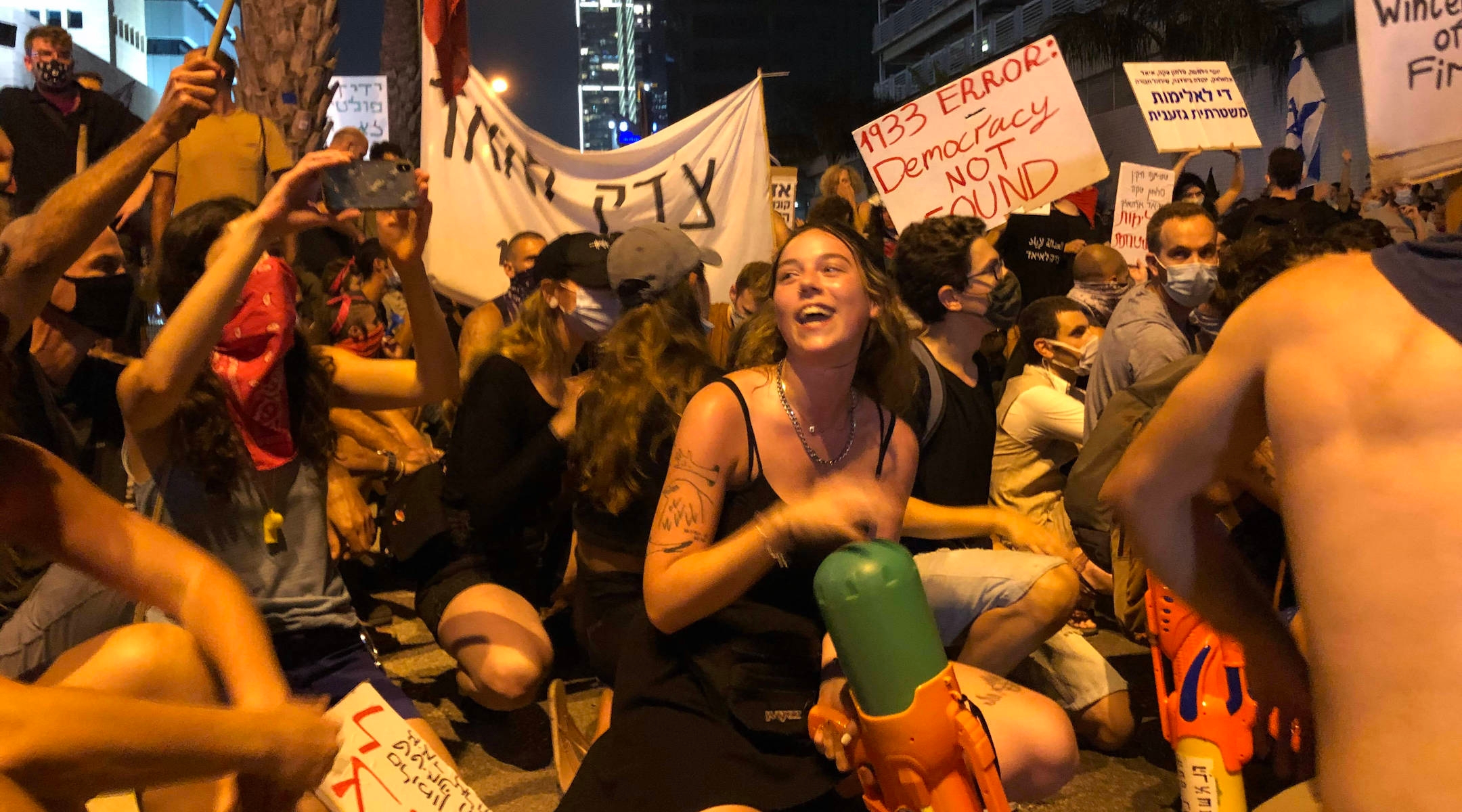 Ohana is “trying to cancel protests and circumvent the law,” complained Maor, a 25-year-old law student from the coastal city of Ashdod who said he had attended a number of demonstrations outside the prime minister’s residence and had been “subject to police violence” for engaging in civil disobedience.

“It was brutal, they used a water cannon against me,” he said, describing how he was shot with a high pressure water jet while participating in a sit-in. “I bruised my ankle. I couldn’t work for two days.”

Another protester, Eliana Barbel, showed off a large bruise on the back of her leg as she described her experience at a protest last week that ended in violent clashes with police.

“I was arrested on Thursday. I was hit and arrested and spent the night in jail for protesting,” Barbel said. “When I was arrested, the cops were very violent. I was sitting on the ground and three riot policemen picked me up and took me.

“They want to scare us, but this will only bring more people out,” she added, holding up a sign decrying violence against Arabs, haredi Orthodox, Ethiopians and leftists, and promising to continue to protest even “if I’m arrested 10 times.” 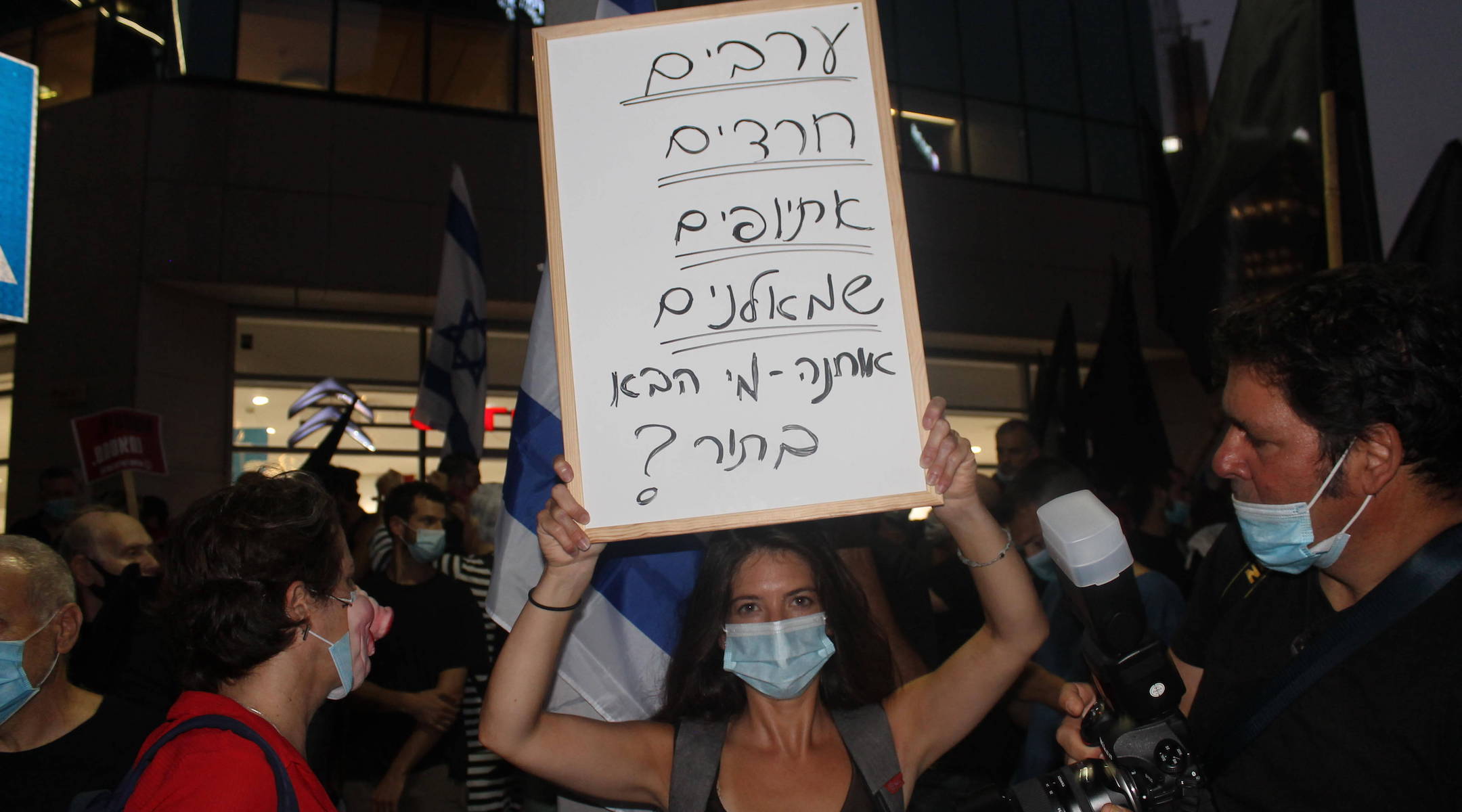 Eliana Barbel at the protest in Tel Aviv holding a sign that reads: “Arabs, haredim, Ethiopians, lefties. Ohana, who is next in line?” (Sam Sokol)

Safran said she was ready to protect younger protesters from the police with her own body.

“We’re trying to save democracy,” she said.

While the crowd protesting near Ohana’s apartment was overwhelmingly secular, Pinchas, 30, a haredi attorney from Bnei Brak, a largely ultra-Orthodox city, said he decided to come out because “government corruption is dangerous to all of us, including the haredim.”

Tuesday night’s protest was marked by tense but not violent exchanges with police. (Five protesters reportedly were hospitalized after being attacked, the Black Flag movement said, by individuals not associated with the police.) After several hours, the protesters drifted away from the zone marked out for them by law enforcement and began marching down a nearby road, stopping traffic and eventually running into a line of policemen backed up by mounted officers.

Large groups of protesters eventually began making their way back, trying to circumvent the police and reach Ohana’s apartment building, leading to several clashes during which officers shoved several people, leading to renewed chants of “no to violence.”

As police and protesters faced off, the mounted officers repeatedly rode up to the edge of the crowd trying to force its members back.

Most of the marchers began to walk through the city, snarling traffic as they made their way through a series of Tel Aviv landmarks, including the square in front of the Habima Theater and the popular Dizengoff Center shopping mall.