Charles Bronfman and Michael Steinhardt are the names most frequently linked to Birthright, the program whose all-expense-paid trips to Israel have become wildly popular among young Jews around the world.

Fewer think of Gidi Mark, Birthright’s CEO and its first employee. When the two billionaires pegged him to lead the program 20 years ago, Mark took it as a great compliment. Today, they can compliment themselves on having made a wise choice. Mark deserves credit for keeping Birthright fresh, dynamic and experimental over the course of decades.

JNS recently sat down with Mark to learn more about Birthright, in what has become in his words “one of the largest, if not the largest, rite of passage for Jews today.”

Q: A far-left radical group launched a campaign this summer against Birthright. They co-opted at least two trips to grandstand politically and to push an anti-Israel agenda. No doubt they consider their efforts a success, as they gained a lot of free publicity. So they’re likely to continue these actions. Are you planning to make changes to the screening process?

A: We are aware of these attempts. We do interview people. People who are really interested in meeting Arabs beyond the borders of Israel can go and do that if they want to after the seven, 10 or 14 days are done. There’s always an opportunity to extend their tickets.

A: I can’t say because our numbers increase. The biggest loser isn’t Birthright, but the ones who forego the once-in-a-lifetime opportunity and decide not to come.

We don’t try to impose or convince anybody of the rightness, of the validity, of certain political arguments. All our participants get an overall orientation about the geopolitics of Israel and the Middle East.

Q: In a sense, the fact that anti-Israel radicals target Birthright is a testament to its success. I understand that 2017 was a record-breaking year for you with 48,000 participants from around the world. To what do you attribute such success?

A: It has to do with the relevance of our programs to this age group—to people who are highly intelligent and who want to be at the scene of the action, people who are curious about what’s been told to them since childhood. What we do here, we create community. Every year we have about 1,300 groups that come from 50 to 60 countries. And the people who meet each other become friends for a lifetime.

This is a gift that we didn’t think about when we started Birthright.

Q: Recently, at the convention of the General Assembly of Jewish Federations, Israeli President Reuven Rivlin talked about a reverse Birthright. He meant sending Israelis abroad to enrich their understanding of Diaspora Jewry. But does that already exist through your program?

A: In terms of messaging, for sure. We have 8,000 Israelis a year who’ve interacted with Birthright participants. In Israel, most of our Jewish existence is handed to us by the society, by the neighborhood, by the state. We don’t need to struggle in order to lead a Jewish life.

Outside of Israel, especially in the strongest democracy in the world, people really make the decision, and they deserve a lot of appreciation for doing that. I think the Israeli, when he or she meets his or her American peer, does get it. I think they appreciate Jewish life in North America and in the United States, and this is the beginning of reverse mifgash [“encounter” in Hebrew].

Q: Birthright has branched out and established specialty trips. Can you tell us about some of those?

A: We have put together over the last 10 years an array of about 200 groups a year. We have trips for foodies, for people who are interested in fashion, people who like extreme [activities]. We even have an annual group of scuba divers. There are people who want to concentrate on art and Hebrew and archaeology. And this is all inside a new form that we are offering called “Birthright Israel Plus,” which is an extension of the seven or 10 days.

Q: What are the most popular ones?

A: I believe foodies. Young people love to discover the roots of Jewish cooking. Israel has really become a superpower over the last several years in the area of cuisine. And you see successful Israeli chefs today in London, in New York and Paris, and they have achieved a high level of fame for themselves. I think this is one of the reasons.

Q: Are there specialty groups debuting in 2019?

A: Personally, I’d like to give Hebrew a strong chance. I believe this is a miracle that happened to us that didn’t happen to any other nation on earth, when people started to speak an old language after 2,000 years. And I see that thousands of young Jews are eager to learn, if only a little, to connect to their past and also to connect on a personal level to potential Israeli friends.

Q: You did a pre-test this winter for a slightly older age range of 27-year-olds to 32-year-olds. How did that go?

A: We are in the midst of the pilot. We have found highly intelligent people are coming over—many of them without having any relationship to any Jewish framework before. In spite of our doubts about the ability of people of this age group to think differently, we discovered very open people.

Q: It’s surprising that a 10-day trip could be so impactful. Even Michael Steinhardt has expressed some skepticism about it. Yet 85 percent say it’s life-changing. How do you explain the strong positive reactions of the participants?

A: This is the magic of Birthright Israel. Many researchers who have been looking at it for the last 18 years don’t have an explanation. I don’t think it is 10 days. It’s a journey that starts with 10 days. It develops, and people change their perceptions, their attitudes and their behavior [because of it].

How it happens in 10 days? All I can tell you is that for the vast majority of our participants, this is the No. 1 best Jewish experience in their life. For many, it’s the best experience up to this point in their lives.

Q: You were the very first employee of Birthright. That was a leap of faith to join a new program. How did you come to be offered the job, and what made you say yes?

A: I changed my perspective only after I left Israel—talk about reverse mifgash—only because I grew up considering myself mostly an Israeli. And the first time that I really understood that first and foremost I’m a Jewish-Israeli is when I left Israel after the army and found myself in Germany on Yom Kippur. It was the first time I fasted on Yom Kippur. Ever since, I fast, of course. And I understood the importance of the Jewish component in my identity.

In spite of my being very pluralistic, I am very proud of being Jewish. Later on, I became a diplomat. And the largest Jewish city in the world—New York—was one of my destinations, where I came to appreciate the high level of Jewish organizational life. People volunteered their free time to do good for other Jewish members of the community. I left New York with a great appreciation of Jewish life. When I was offered by Charles Bronfman and Michael Steinhardt the chance to start the first office of Birthright Israel, I took it as a great compliment

Q: Is there a specific event or story that has impacted you the most in your 20 years with the program? 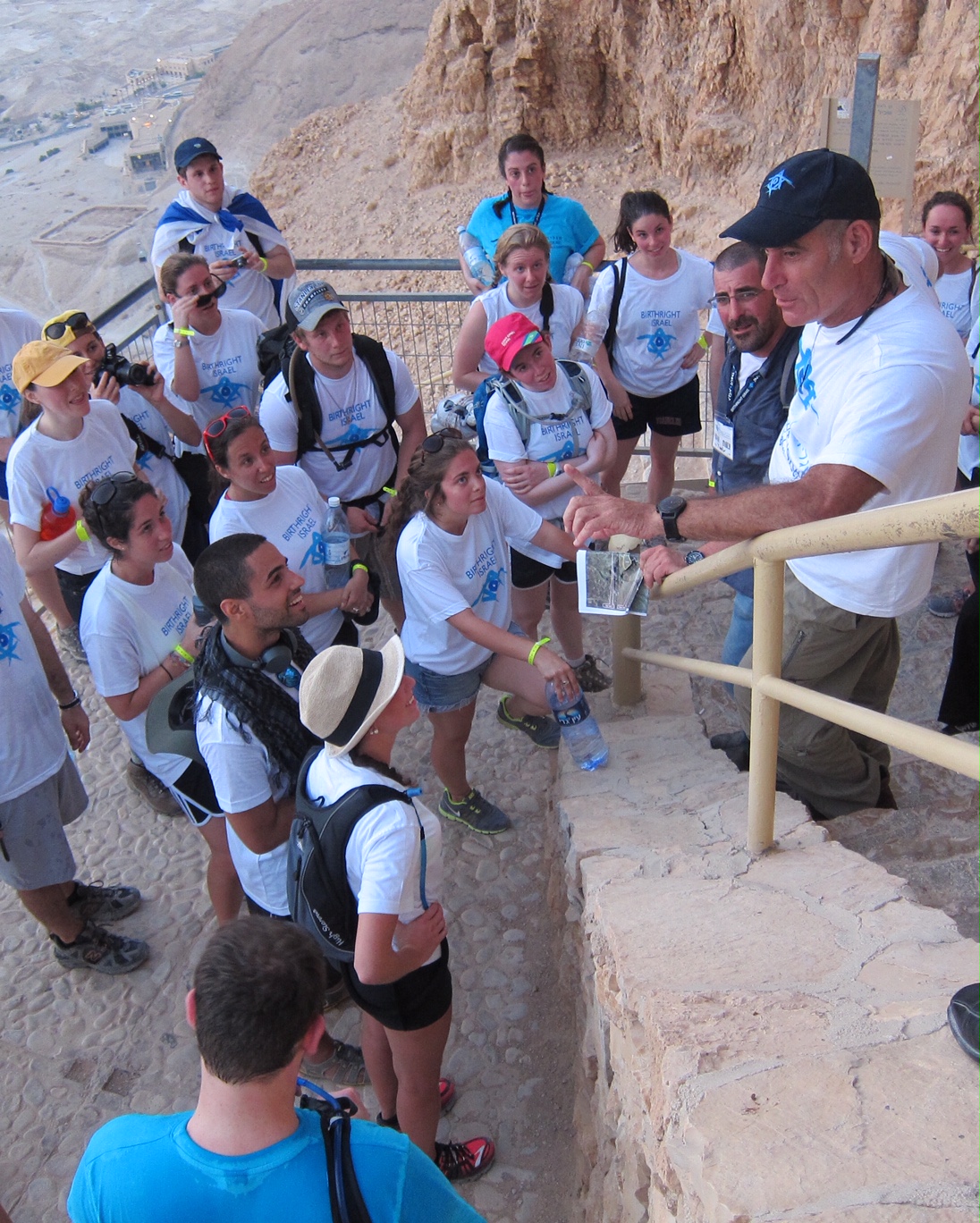 A: I cannot be specific. I can talk about the handicap groups. We have eight to 12 of them every year. It really gets to your gut to see people who can hardly leave their home—let alone their city or their state—coming for the first time to Israel with their loving chaperones, normally their friends or parents, to experience Israel from the height of a wheelchair.

Then there were the 20 people out of the 180-member Jewish community of Suriname, who came over to Israel and went to see their synagogue that is now at the Israel Museum, where most of them had their bar mitzvah. The synagogue floor is made out of sand. Seeing it become wet from their tears when they saw the synagogue they grew up in, it’s impactful. I feel grateful to have such richness in my life.

Q: Are there other plans to engage Birthright alumni?

A: We are now checking the possibility of the first gathering in Israel of alumnae. There are many organizations that run long-term trips in Israel like Onward and Masa, the majority of whose participants are Birthright alumnae. And we built an app that refers our participants to experiences in their own communities in the United States and Canada. We want to act as a bridge between participants and those experiences. Because the experience that starts in Israel lasts a lifetime. But we can improve the cooperation with other entities, federations.

Q: Do you have a record of how many Birthright participants went on aliyah?

Q: How would you describe the funding situation of Birthright right now?

A: There’s never enough money because in order to keep up with the competition, you need to offer a higher and higher level of quality. Quality costs money. To hire the best experts. To provide the best technology. We invest a lot in educational staff. We invest more than $2 million a year.

A: Yes, the unknown. It’s hard to plan for five years from now. The fast pace of change doesn’t let you plan long-term, on the one hand. On the other hand, it makes you aware of the fact that you need to be as flexible as possible.

I don’t want to be satisfied with who we are. Because once you are satisfied, it makes you lazy.

Q: Michael Steinhardt said that Birthright has saved a generation of Jews. Do you agree with that?

A: I do agree with that. Unlike other organizations, Birthright Israel is the largest grassroots organization that exists in the world.

If we talked about 1,000, 5,000, 10,000, Michael Steinhardt would not have been right. But when we talk about 50,000 out of a cohort of 100,000—no one really knows what the number is of the age group today—now we talk of a critical mass. Jewish life in North America over the next few decades will be impacted by Birthright for sure. It’s one of the largest, if not the largest, rite of passage for Jews today. A bar and bat mitzvah, Pesach—all these life passage events—Birthright has become one of them. And it’s going to impact how Jews see themselves and Jewish existence.

I looked at the General Assembly attendees who came over recently—people I meet at conventions. I don’t see Jewish organizations today without Birthright Israel alumnae. They are all over. The young leadership is mainly people who went on Birthright. Three-quarters of the presidents of Hillels around campuses are alumnae of Birthright. This is going to be the single most impactful component in Jewish life in the United States and North America in the 21st century.