CHISINAU, Moldova (JTA) — MacBook under his arm and sporting the latest AirPods, Shimshon Izakson looked as if — with a change of outfit — he could have just stepped out of a hipster cafe in a trendy neighborhood of Moscow or Bucharest.

But he was in a Jewish center’s sports hall in downtown Chisinau, helping Jewish refugees who had just arrived in Moldova from Nikolayev, a strategic port city on the road between Crimea and Odessa that has come under repeated missile attack since Russian troops invaded Ukraine on Feb. 24. A gaggle of children played in the corner, exuding a sense of calm in a room dotted with exercise mats and wooden pallets that have been repurposed as beds.

Izakson, wearing a black hat, a suit and a well-groomed beard, wise-cracked in Belarussian-accented Russian and giggled with some of the over-excited children. Another toddler pushed himself past Izakson in a colorful plastic car.

“Many of the smallest ones are excited because they think they are going on holiday,” Izakson said with a sad smile.

Izakson, an Orthodox rabbi who was born into a secular family in eastern Belarus and lived for years in Moscow, has a clear connection with the Jews who have traveled to Moldova. Formerly a rabbi in Vitebsk in northern Belarus and Vilnius in Lithuania, he is helping oversee local relief efforts run by the Jewish Community of Moldova, an Orthodox organization.

Very few Ukrainian Jews speak Hebrew, and many have found it hard to communicate with the many Israeli or American Jewish volunteers who have little knowledge of Ukraine and have flooded into Moldova to offer assistance. But while the official language of Moldova is Romanian (despite a decades-long debate over whether it should be called Moldovan), many Moldovans speak Russian, which has been useful for the Jewish refugees, especially those from Odessa, who often speak Russian too. They can stay and more easily find work. In neighboring Romania, for example, where many move on to, few people speak Russian.

Around Izakson, a half-dozen Israelis deployed to organize refugee relief efforts wandered around — including Zaza, a “medical clown,” who received disgruntled stares from some older Ukrainians who figured out she was not a medical doctor. 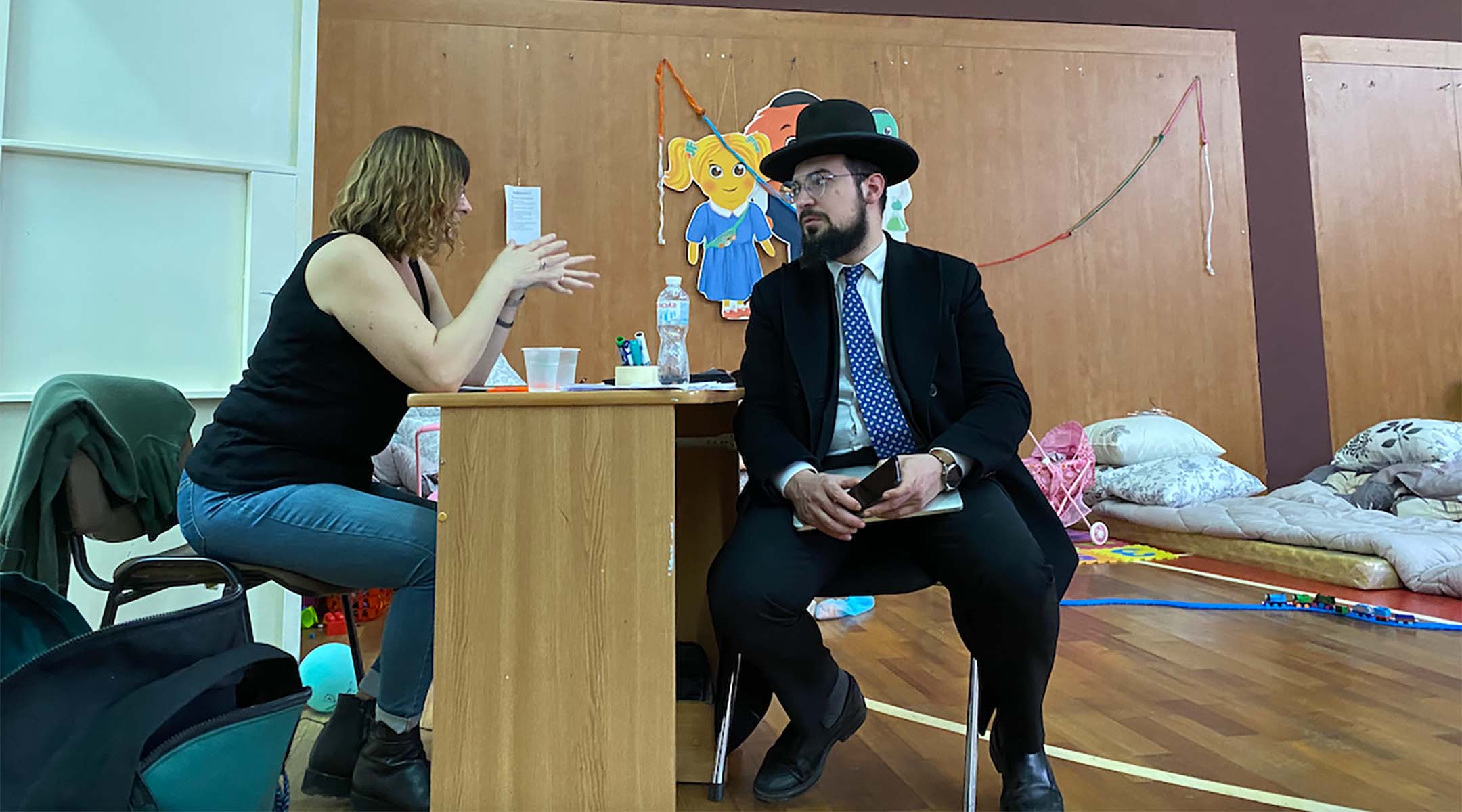 Izakson chats with a relief worker at a sports hall in downtown Chisinau, Moldova. (Jacob Judah)

Language barriers for many of the refugees remain steep as they spread out throughout Europe; some countries are focusing on intensive language training for new arrivals.

“We are trying to create the most normal place possible,” Izakson as a toddler ran around telling people about his stuffed toy Orangutan.

“We are then trying to move people at the first possible opportunity onto where they want to go, whether that is Germany, Israel, or Romania. We need to move them quickly because we don’t know how many more refugees will come,” he added.

Moldova, which is sandwiched between Romania and Ukraine and is one of Europe’s poorest countries, has so far welcomed over 400,000 Ukrainians fleeing the Russian invasion. Few want to stay for long: According to Moldovan authorities, fewer than 100,000 are still in the country.

Izakson has a drive to connect to young Jews ambivalent about religion and to Russian-speaking Jews in Western Europe — two groups that often intersect. He had intended to move to London in the summer to become a rabbi for the large but often forgotten Russian-speaking Jewish community, estimated at over 10,000, in Britain.

Want more international stories in your inbox? Sign up for JTA’s Around the World newsletter.

“I don’t think I need a synagogue,” he said. “Nobody would want to go to a Russian synagogue. Russians — all of them — don’t want to be Russians when they are abroad. It could be a sort of networking place, with co-working and a little Jewish flavor, managed by me.”

He has also carved out a space for himself in another non-synagogue space: on TikTok, garnering over 40,000 followers by posting videos about Jewish life and religious practiceset to the latest viral music trends.

“I really love TikTok,” he said with a giggle. “I have Telegram and Instagram accounts too — nobody is doing this in Britain, but there are lots of Russian-speaking rabbis working on these platforms.”

“This is the only way if I want to bring young people who didn’t grow up with Judaism back,” he added. “I have to reach out. Everybody here thinks that Jewish tradition is just…”

He laughed and mimicked praying and bowing. “‘Why?’”

The Jewish Community of Moldova, the country’s main Orthodox community here, shares a building with a half-dozen other Jewish organizations, including the American Jewish Joint Distribution Committee. It is housed in a recently rebuilt community center on one of the main pedestrian drags in central Chisinau. 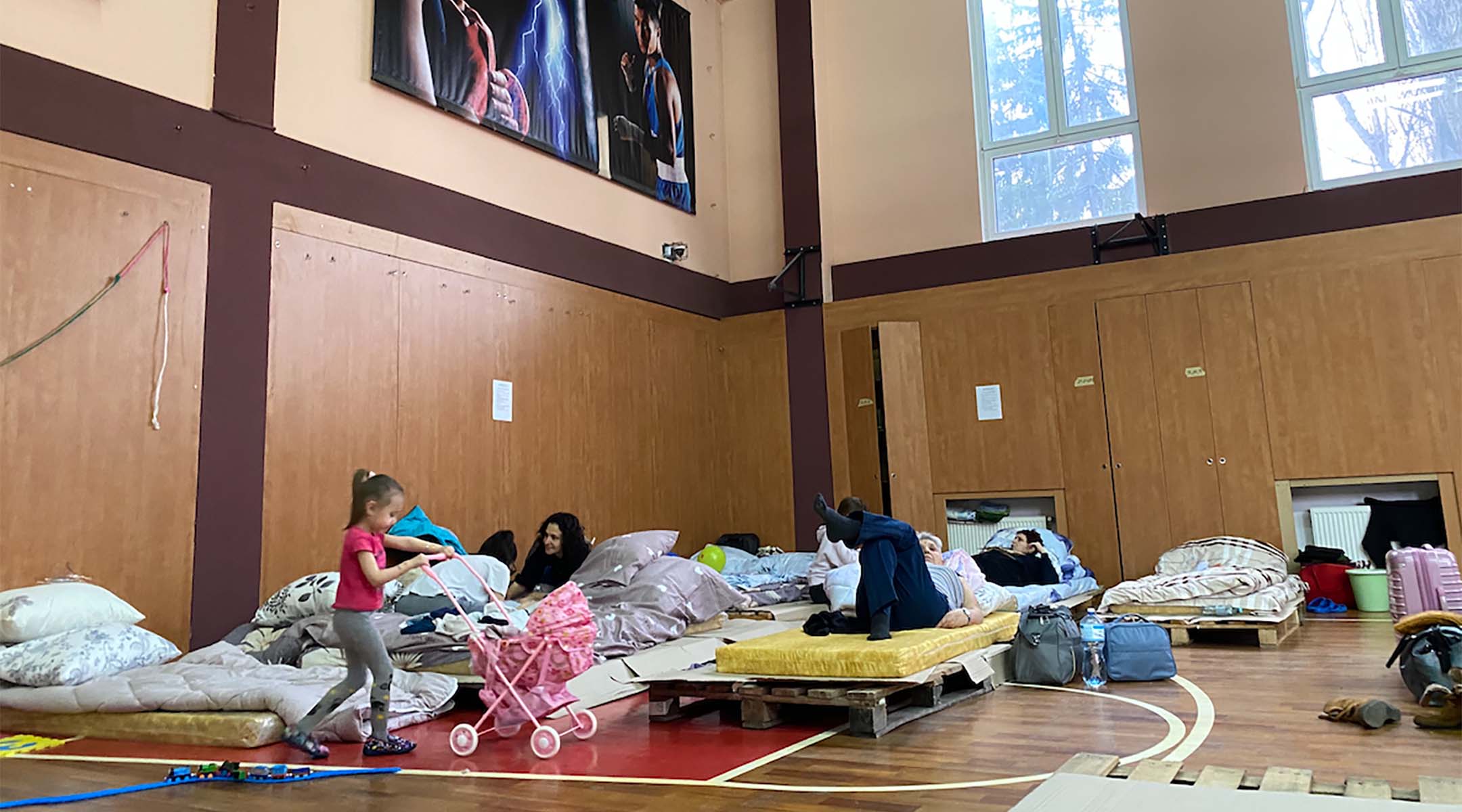 The Jewish Community of Moldova is running five shelters in Chisinau. (Jacob Judah)

Izakson says that he did not expect the global mobilization of Jewish organizations to help Ukrainian refugees.

“In normal days, you look for something small and you can’t find it. Now, when the need is much greater, help is coming from every direction,” he said. “I hope that we will learn something from this.”

There has also been some monetary support from particularly wealthy Jews in Moldova and other former Soviet states, but more will be needed. There is a looming financial disaster on the horizon for many Jewish communities that have been on the frontline of the refugee response, Izakson said.

“We need money,” he said. “We are feeding everyday 450 Jews that are in our centers. We are paying all those bills. When we do the accounts, we will be in the minus of at least €100,000. In a few weeks it will be more than that.”

RELATED: All of our ongoing Jewish Ukraine coverage

Izakson, who still has most of his family in Belarus, has not been able to talk with them about the situation and whether the Putin-allied autocracy might enter the fighting in Ukraine. “We cannot speak about these things over the phone,” he said with a hearty laugh. “In Belarus, everyone knows that you are not the only person who can hear what you are saying.”

Back in the sports hall, Irina Marmuta watched her two-year-old son, Artyom, out of one eye. They were on their way to Germany, where a friend from Nikolayev had found them a family willing to host them. Until she figures out the best way to get there, Irina has been staying in one of the five shelters that are being run by the Jewish Community of Moldova.

“You cannot see, but I can tell that on the inside he is really afraid,” she said in a tone that barely concealed a panic. “He wakes up at night covering his ears and shouting ‘mummy, mummy, there are sirens.’ I tell him that he is having a nightmare, but he still goes back to sleep with his hands over his ears.”

Izakson has also started posting content from Chisinau about what Moldova’s Jews are doing to help — but he’s not always happy with social media.

“I think that they aren’t promoting content related to Ukraine,” he said about TikTok. “They are not pushing it.”

He pointed at his phone, showing one of his latest videos. “It got only 350 likes,” he said.