Sophie Roth, 17, from Long Island, N.Y., had always watched as ambulances whirred by and wondered what it would be like to serve as an emergency responder, assisting someone in pain.

This summer, Roth and 14 other teens are seeing firsthand how powerful it can be “to have that really personal connection with someone who is very sick,” she said, and how important a helping hand can be in a time of crisis.

But Roth is having this experience in a place she never would have expected: southern Israel.

She is participating in Camp Ramah’s inaugural Asiyah summer internship program, through which she received 60 hours of emergency-responder training through Magen David Adom and is volunteering for three-a-half-weeks with MDA in Beersheva. She and fellow volunteers learned 300 words of Hebrew medical jargon; studied how to read a person’s blood pressure, sugar and pulse; and to accurately report this information to MDA paramedics and medics.

Additionally, feedback from campers was that they were very college-focused and wanted a program that would not only be fun and meaningful, but also give them volunteer hours and/or training experience, Applbaum told JNS.org.The idea to launch the Asiyah program was based on several factors, according to program director Naama Levitz Applbaum. For starters, Camp Ramah was seeing that many campers had been to Israel before the age of 17—the traditional age when campers take part in the Ramah Summer Seminar. They found that kids who have already been to Israel are less interested in a standard tourism program.

The Asiyah program combines all these factors.

‘Create the language to bridge that gap’

The campers started their trip in late June in northern Israel with the Ramah seminar participants. Then they traveled to Jerusalem for their 10-day MDA training course. In mid-July, they headed south to volunteer in Beersheva, Yeruham, Dimona and Ofakim. The students volunteer from 7 a.m. to 3 p.m. each day.

“We decided to go outside Jerusalem — outside the participants’ comfort zones — to Beersheva, which is also close to people that really need these volunteers,” Applbaum said, noting that Ofakim, Yeruham and Dimona are lower-income development towns.

“I have already learned so much from being at the station, where everyone spoke to me in Hebrew, and being totally immersed has been very exciting,” said Jenna Levin, 17, from San Diego.

Applbaum also said the program hopes to close the seemingly ever-widening gap between young American Jews and Israel through “meaningful experiences and interactions with Israelis from all walks of life.”

In the south, she added, campers also “interact with Bedouin and Arab Israelis, and understand the coexistence that exists. With this meaningful encounter, we can create the language to bridge that gap.”

Roth said she has benefited from going into people’s homes, and seeing how they live and interact with one another and their environment. “That is an important part of Israel that not many tourists get to see — the people’s connection to this land and what they are going through to live here.” 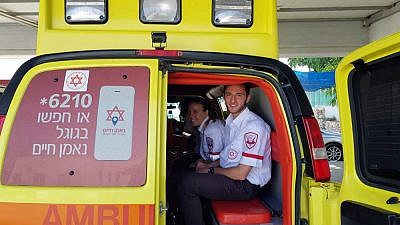 The teen had never been to Israel before. She admitted being a little scared before arriving in the Jewish state. Roth said when she would watch the news about events in Israel back in the United States, she would often wonder why people choose to live in Israel if they know they are in danger. But her position has changed.

“This morning, we went over what to do if something serious is going on, and I don’t feel scared anymore,” she said. “Now I feel strong because I know I can help people if something happens—if there is a bomb or a mortar. Knowing that we have that power to help people and fight back made me feel stronger.”

For Jacob Wise, 17, of Toronto, the experience is an opportunity to connect with his Jewish heritage and “do a huge mitzvah helping people save lives.”

Wise mentioned: “I’ve never done anything like this, nothing even close.”

Roth expressed similar sentiments. She said there is “nothing else more important you can do in your life as a Jewish teen than coming to Israel.”

She said that for a Jew, “working in an ambulance in America could never be as impactful as in Israel, where you are serving your fellow people.”

Applbaum noted that next year, Ramah will open a similar program in the high-tech arena — one of Israel’s most rapidly growing economic and business sectors.