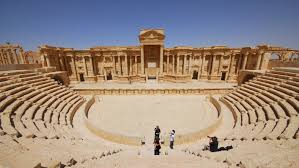 Cracks in the united US-Russian front over the Syrian ruler’s fate surfaced — even before the ink was dry on the joint announcement issued in Moscow Friday, March 25, by US Secretary of State John Kerry and Russian Foreign Minister Sergey Lavrov, setting August as the deadline for a political solution of the five-year Syrian conflict.

Did this exchange spell another Washington-Moscow impasse on the future of the war and the Syrian ruler? Not exactly; Our military and intelligence analysts report that the two powers are in accord on the principle that Assad must go, but are maneuvering on the timeline for the war to end and the Syrian ruler’s handover of power.

The Americans want it to be sooner. The transition should start in August and result in adding opposition parties to the regime in positions of real influence.

President Barack Obama, when he conducts his farewell Gulf tour in April, would like to show Saudi Arabia and Gulf emirates that he has finally kept his word to them to evict Bashar Assad from power before he leaves the White House next January. The US would also be better placed for bringing the Syrian opposition into line for a negotiated deal.

But Putin prefers a delay because he has problems to solve first. The six-month long Russian military intervention in the Syrian conflict turned the tide of the war. The Syrian army and its Iranian and Hizballah allies were able to stabilize their positions and even score some important victories against rebel forces in central and northern Syria. Last year, Putin and Iran’s supreme leader Ayatollah Ali Khamenei were definitely on the same page and fully coordinated.

That cordial relationship was thrown out of kilter by the Kremlin’s decision to work with the White House for bringing the disastrous Syrian war to an end and terminating the Assad era.
From November, Iran’s Gen. Qassem Soleimani’s frequent visits to Moscow on liaison duty petered out.

Khamanei is adamantly opposed to Russia and the US commandeering the decision on Assad’s departure and its timetable. He is even more outraged by the way Putin has moved in on Syria and made it Russia’s home ground in the Middle East.

The rift with Tehran prompted Putin to announce on March 14 the partial pullback of his military forces from Syria. It was a threat to pull the rug that had turned the tide of the war in favor of Damascus and Tehran.