There was not that much time to think about it, and that is part of the gift from Above, I suppose.

There were a few times over the last two weeks that I had time to contemplate and focus on the void in my life, with both my parents now gone to the great and mysterious hereafter.

Of course, two of those times were when we recited the Yizkor prayer — on Yom Kippur and then on Shemini Atzeres. The other time was a few days before that, when my credit card company called to say that they suspected some fraudulent activity on one of my cards.

They asked me a few questions about purchases, my date of birth, my zip code, and then the person on the phone verified my identity by asking what my mother’s maiden name was. That’s when it all came flowing back, if only for a little while.

There was the memory of loved ones on the appropriately solemn day of Yom Kippur, but then another few moments of deep contemplation and remembering, this time deep into the giddy celebration of Sukkos. How do we reconcile and deal with these obvious emotional contradictions?

The real and true answer is that I don’t know, and, for that matter, no one really knows — we just do it. So over this yom tov, we davened, ate, drank, danced, and remembered. And no, we are not new at it, because at this chronological stage most of us observed our parents at some point doing the same thing, so we know it well.

But then on Thursday night, while at dinner in an overheated sukkah in Miami Beach, I received a call from a friend that shook my wife and me to our cores.

The son of our dear friends Abe and Sheree Belsky had passed away while at a friend’s home in California.

You know how it is these days. You see a call coming in from a friend but you are not expecting the call so you wonder what it is that has to be dealt with at that moment. At first, I did not pick up the phone but rather texted him back to say that I would call him a bit later. To that he responded by asking that I just call him for a minute. I stepped outside and called, and I’m still replaying that moment in my mind over and over again. Did I hear right? What are you saying?

Simcha Belsky was a wonderful, funny, and thoughtful young man. He was just 32 years old, the same age as one of my boys, and they were friends with one another as kids.

The levayah took place on Sunday, and because of yom tov, shivah began on Tuesday night. A supreme understatement is that no one is prepared for something like this. The complications beyond the expected challenges were that he passed away in California, most of his family was in Florida, and they were heading into Shabbos, with two more days of yom tov on its heels.

It is a virtual obstacle course in time — what to do and how to do it and when are all factors that need to be dealt with under obviously great duress. In the end though, somehow it gets done despite the difficulties and despite the surreal and complex circumstances.

The fact is that as our children grow older and take on their own identities, they remain our children but they are not kids anymore. That said, I suppose you can say that I knew Simcha best when he was a kid. For a while, many years ago, probably about 12 years ago or more, Simcha oversaw circulation of the 5TJT in Brooklyn.

He moved on to bigger and better things, became a much-in-demand and creative graphic artist. The 5TJT readership got to see the work of his sharp eye each week in the Gourmet Glatt ads that grace these pages, as well as in his work for a multitude of other clients.

But that was the outside Simcha, the adult who we mostly knew by his work. But then there is the son and brother, the uncle and the cousin, whose passing leaves a deep, penetrating, and inexplicable void in the lives of his parents, his siblings, and friends. It is now a scar in our lives, an emotional wound that will be difficult to recover from over the short-term.

Unfortunately, with the passage of time and everyone being busy with their own lives and assorted distractions, we often do not know the dynamics in the families of our friends or neighbors. To that end, the remarks at Simcha’s levayah — and those words are indeed very difficult to write — by his brothers, his sister, rabbi, and friends opened us up to a world that we could not have been familiar with under usual everyday circumstances.

His brother Zevi, who along with Simcha and his other siblings grew up around the block from us, was riveting and his words telling. Though a great deal was said about a good and sensitive young man, Zevi summed it up by stating simply that Simcha was “humble, kind, and generous.”

His brother Motti and his sister, Frayde, pretty much said it best. Simcha was by his very nature a person who lifted other people’s spirits, always upbeat and gung-ho, as they say.

Yoeli Steinberg of Gourmet Glatt, who worked closely with Simcha on the Gourmet Glatt public relations and advertising materials, said that when you were in a room with Simcha, you could not help but be cheerful and break out in a smile.

It is a difficult time for the family, but they are surrounded by family and close friends who feel and share their pain as the slow and arduous healing process slowly begins.

On Monday, we said Yizkor to remember our loved ones who played such integral roles in all our lives. Decades may have already passed in some situations and we are still incapable of wrapping our minds around this mysterious way of Almighty G-d that incorporates loss of those we love into our daily existence.

For those who lost a dear parent or relative within the last year, Yizkor is not said. Instead, that person remains silent in shul during this prayer because there is no need to summon up remembrance yet.

And that sentiment and emotion is perhaps not truer in any circumstance than in the matter of remembering Simcha Belsky. We are not required to say Yizkor for those recently departed, and that is because just like Simcha, they are, in a sense, still very much with us. 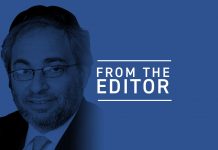