(JTA) — The ceasefire declared by Israel and Hamas after 11 days of fighting seems to be holding, but the aftereffects on Jews in Europe —  especially in Britain — are still being felt.

As in previous rounds of Israeli military conflicts involving Palestinians over the past 20 years, antisemitic violence and intimidation have surged in Europe, where tens of thousands of protesters have marched and rallied at events that expressed rage toward Israel. Some have used the moment as a pretext to target Jewish people.

In the United Kingdom, 116 antisemitic incidents have been reported since May 9, the day Hamas started launching rockets into Israeli cities, compared to only 11 cases in the previous two weeks. In one incident on May 16, a rabbi was beaten by two young men who hurled antisemitic slurs during the attack. The rabbi, Rafi Goodwin, sustained moderate injuries that required hospitalization. Police arrested the alleged assailants, who also are accused of stealing Goodwin’s phone.

On Friday, after the ceasefire, a man broke into the car of an Orthodox Jewish man in a heavily Jewish part of London and assaulted him. The suspect was detained by passersby until police took him into custody, the Jewish News of London reported.

For British Jews, the spike has been terrifying. Some are feeling unsafe and wondering if they will stay in the United Kingdom. And it is dashing the idea that Jews in the U.K., where most Muslims are not from the Middle East, could avoid the level of antisemitic violence observed elsewhere in Europe.

“It’s the mobilization, the impunity, the scale, the sheer misogyny and the violence that’s so shocking this time around,” said Linzi Pinto, a Jewish mother of two from northern London. “It’s the worst it’s been. It’s terrifying and we’re definitely questioning our future here. We’re fortunate to be able to leave.”

Like many other British Jews, Pinto was especially shocked by a convoy of at least 10 cars flying Palestinian flags and blasting music in Arabic that on May 16 drove 200 miles from the northern city of Bradford to the heart of Jewish London, the Golders Green neighborhood. One convoy rider shouted antisemitic insults and incitements to violence there, including “f— the Jews, rape their daughters.” Police have arrested four people in connection with the incident. 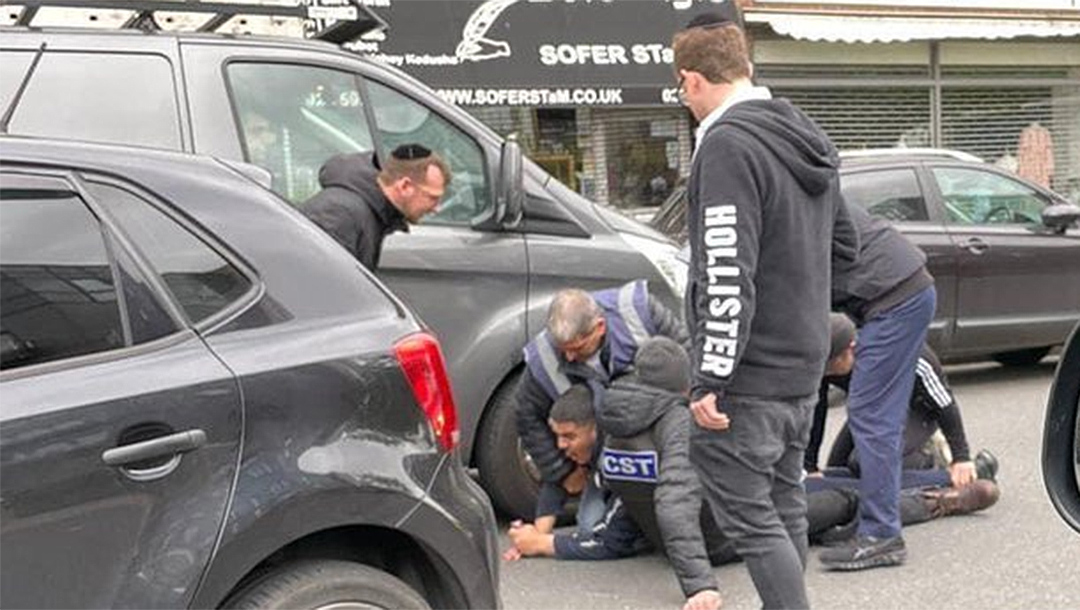 Men from the CST and Shomrim security units detain the alleged attacker of a Jewish man in his car in London, May 21, 2021. (Eye on Antisemitism)

Earlier in the day, Goodwin was assaulted outside his synagogue in Chigwell, north of London, in what police eventually said was an antisemitic incident.

Pinto said her family recently purchased real estate in the United States and the antisemitic events — notably over the past two weeks — increasingly are making them contemplate a move across the Atlantic.

Victoria Prever of London recalled in a column for the Jewish Chronicle that on the Jewish holiday of Shavuot, her two children had prepared cover stories in case they were asked on the street why they were not in school, so as not to reveal that they attend a Jewish one that was closed for the holiday.

“My heart broke. What has happened that at primary school age, she is working out how to hide her Jewishness from strangers?” Prever, the Chronicle’s food editor, wrote of her 10-year-old daughter in the column. “Should we be more discreet? Would we be better off more integrated — in non-denominational schools?”

The convoy and related events have triggered dormant fears among British Jews.

“My grandparents were Holocaust survivors. I’m usually long asleep by now, but my stomach is in knots,” Becky Aizen, a historian and author who was born in Australia and has been living in London for many years, wrote on Twitter on May 17. “This IS different. My DNA is not equipped.”

Many have echoed that feeling — that the intensity of antisemitic abuse in the U.K. is higher than in previous situations involving Israel.

“Antisemitism in the UK sadly always spikes when there is conflict in the ME but this feels worse than ever,” wrote Luciana Berger, a former prominent Jewish Labour lawmaker who now works in public relations.

“This time it feels different. It feels more intense and far scarier,” Simon Cohen, a 36-year-old Jewish lawyer from London, wrote in a reply to Berger’s tweet.

The increase in antisemitic violence in London hasn’t changed the daily routine of Joseph Cohen, an Orthodox Jewish Israel activist whose focus is advocacy in especially hostile environments.

“I think especially in these times we have to be visible, we have to be present, and I will still walk around London with my tzitzit out, a big kippah and a jumper labeled ‘Zionist,’” said Cohen, 37, who engages with Muslims at anti-Israel events for videos he posts on the website of his Israel Advocacy Movement charity.

But even Cohen acknowledges that right now he is “more fearful than ever before” because of the intensity of the current wave of anti-Israel and antisemitic animus that began with the fighting on May 9.

“I am dressing exactly the same way as I always have been, I’m going to the same places,” Cohen told the Jewish Telegraphic Agency. “But I’m looking over my shoulder much more than I ordinarily would have. And I’m much more aware of who I’m talking to and basically where I am.”

Britain is not alone. Elsewhere, in places such as Vienna, Brussels and Amsterdam, recent anti-Israel events have featured chants urging Jews to remember Khaybar, the site of a seventh-century massacre of Jews in Saudi Arabia, because “the army of Muhammad is returning” to kill them, as the chant goes. 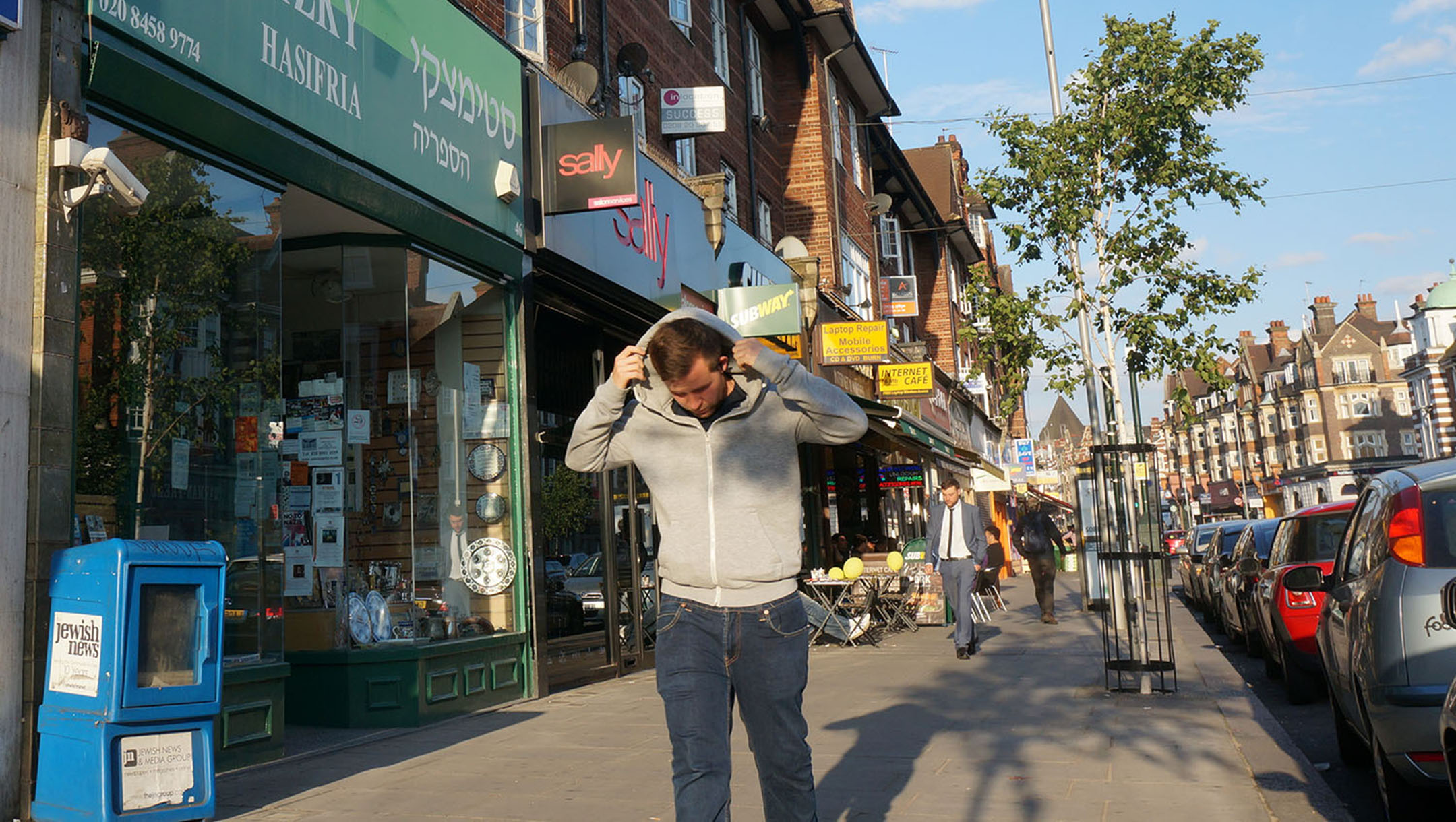 A man walks down a street in the heavily Jewish Golders Green neighborhood of London, June 19, 2015. (Cnaan Liphshiz)

Jonathan Arkush, a previous head of the Board of Deputies of British Jews, is not convinced that the current spike in antisemitic incidents is unprecedented.

“I think the people are feeling the heat of the moment and are having an emotional reaction,” said Arkush, a lawyer and father of three who said he feels safe walking around London while wearing a kippah.

Broadly speaking, Arkush said, the United Kingdom’s antisemitism is mitigated by the fact that unlike in continental Europe, most British Muslims come from southern Asia and are not Arabs with roots in the Middle East.

“Antisemitism is still more prevalent among British Muslims than the general population,” he said, “but Israel occupies a far less central place in their worldview compared to Muslims in France.”

That may be changing with social media.

“When young British Muslims are surrounded by hate speech about Israel on their timeline, that may be eroding the buffer I’ve just described,” Arkush said.

In a May 10 panel discussion hosted by the 5pillars Muslim website, a British-Muslim imam from Birmingham called for “an announcement for jihad by Muslim majority states.” The imam, Asrar Rashid, also said Pakistan should fire missiles at Israel just as Iraq had in the 1990s, when “every Jew was running into his shelter, those with the European passport would be running back to Europe” as the “Jews are a cowardly nation.”

This sort of agitation by imams and some Muslim community leaders has existed for decades in the United Kingdom, a nation of 66 million, including 3 million Muslims and about 295,000 Jews. But it’s seeing a resurgence following the rise of Jeremy Corbyn, an anti-Israel politician who once called Hamas and Hezbollah his “friends,” to the head of the Labour Party.

Corbyn was replaced last year by a centrist, Keir Starmer, amid a highly covered scandal over the proliferation of antisemitism in Labour’s ranks under Corbyn, as well as his alleged failure and reluctance to deal with it. Both the current and former chief rabbis of the United Kingdom have accused Corbyn of being antisemitic, an allegation he has denied.

“Firstly, the Corbyn years have been traumatizing to Jews, who still don’t trust Labour and for good reason,” Arkush said, alleging that Starmer has not done enough to reform the party. “So they’re scarred.”

The Corbyn clique, Arkush added, “has placed Israel at the center of the far-left movement, who are now rushing to politically use conflicts involving Israel.”

The agitation shows what “sentiments exist within a section of British Muslims and in our society,” he said. “But it will die down once hostilities end — until the next time.”