WASHINGTON (JTA) — Alexandria Ocasio-Cortez is just one of 435 members of the incoming U.S. House of Representatives, but her youth, surprise primary win in her Bronx-area district, socialism and, above all, outspokenness have attracted outsize attention. So when Ocasio-Cortez, 29, likened the crisis at the U.S. border with Mexico to Jewish refugees that the United States turned away before World War II, the reactions came thick and fast.

Attached to her tweet was a now viral Reuters photo of a mother fleeing the tear gas clutching two toddlers, one in diapers.

Asking to be considered a refugee & applying for status isn’t a crime.

A migrant family, part of a caravan of thousands traveling from Central America en route to the United States, runs away from tear gas in front of the U.S.-Mexico border wall in Tijuana, Mexico.
( 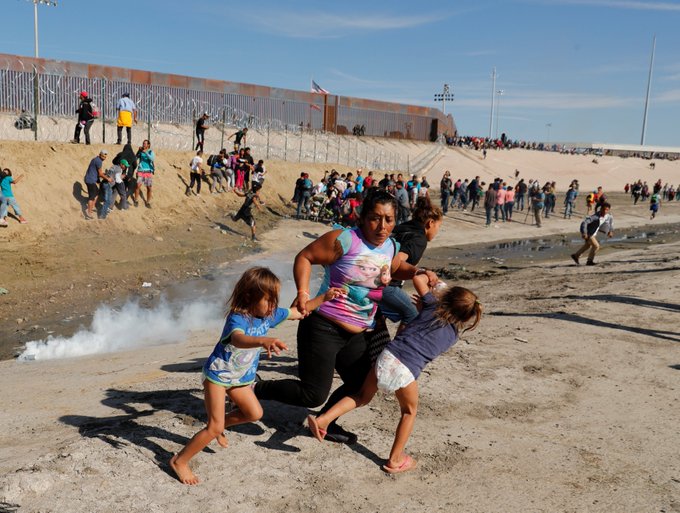 A number of conservatives seized upon the tweet to suggest that Ocasio-Cortez was likening the migrants that President Donald Trump has labeled as “invaders” to the 6 million Jews who perished in the Nazi Holocaust.

“New York Democratic Rep.-elect Alexandria Ocasio-Cortez on Sunday compared members of the migrant caravan attempting to enter the United States to Jews fleeing Nazi Germany during the Holocaust” was how the conservative online news site the Daily Caller framed its report on Ocasio-Cortez’s tweet.

“I recommend she take a tour of the Holocaust Museum in DC,” Sen. Lindsey Graham, R-S.C., who is close to Trump, said Monday in his own tweet. “Might help her better understand the differences between the Holocaust and the caravan in Tijuana.”

Asked for comment on whether it is appropriate to liken the Central American refugees to Jews fleeing Germany, a museum spokesman pointed to its statement in 2017 when Trump announced plans to shrink refugee access to the United States. The statement suggested it is not out of place to liken the flight of Jews in the 1930s to subsequent refugee crises, even if the conditions in the home countries of the asylum seekers differ in scale or torment.

“The United States Holocaust Memorial Museum is acutely aware of the consequences to the millions of Jews who were unable to flee Nazism, as noted in our November 2015 statement on the Syrian refugee crisis,” the 2017 statement said. “The Museum continues to have grave concern about the global refugee crisis and our response to it. During the 1930s and 1940s, the United States, along with the rest of the world, generally refused to admit Jewish refugees from Nazism due to antisemitic and xenophobic attitudes, harsh economic conditions, and national security fears.”

The Twitter account of Auschwitz, the museum and memorial at the site of the former Nazi concentration camp, also appeared to back Ocasio-Cortez in a tweet Tuesday.

“When we look at Auschwitz we see the end of the process,” the tweet read. “It’s important to remember that the Holocaust actually did not start from gas chambers. This hatred gradually developed from words, stereotypes & prejudice through legal exclusion, dehumanisation & escalating violence.”

The most famous case is that of the St. Louis, the German “voyage of the damned” turned away from the United States and Canada in 1939. (Historians estimate that a third of the 900 or so Jewish refugees aboard the St. Louis perished in the Holocaust.) Canadian Prime Minister Justin Trudeau recently apologized for his nation’s decision to turn away the ship; no U.S. president has.

Melanie Nezer, a vice president of HIAS, the lead Jewish refugee organization, said the laws governing how nations accept and process refugees were determined with the Holocaust as an immediate memory.

“The laws we have today in this country were based on the U.N. convention of 1951, which was based on Jewish refugees being turned away during World War II,” she said.

That’s why, Nezer said, it made sense for Ocasio-Cortez to invoke not only the Jews turned away in the 1930s and ’40s, but subsequent refugee crises.

“The point she was making, and I think it was an appropriate one, was that countries must hear asylum claims,” said Nezer, who added that the Trump administration’s shutdown of the border at Tijuana was unprecedented in recent history and, in the view of HIAS, illegal.

Mort Klein, president of the Zionist Organization of America and the son of Jewish refugees, has become the most outspoken defender of Trump’s immigration policies among Jewish organization heads. In a series of tweets Sunday, Klein suggested that the Central American migrants aren’t actually refugees.

“Stop illegal immigration. They’re mostly healthy looking young men,” he said in one tweet, referring to the migrants at Tijuana.

Later, however, Klein conceded that seeking asylum in the U.S., with or without legal status, is not illegal. What’s new is a Trump policy saying those who enter the United States from Mexico between ports of entry are ineligible for asylum.

“Any person who is facing serious danger or oppression should be given every opportunity for asylum in the United States, just as my parents, survivors of the Holocaust, from Poland and Czechoslovakia, were given asylum,” Klein tweeted Sunday.

Nezer said the Central American refugees were denied the opportunity to apply for refugee status from a distance the way Jewish refugees could from the relative safety of a displaced persons camp. Others say the current system is not designed to facilitate the processing of large numbers of asylum seekers at the designated crossing points — especially families — although the administration counters that many of the migrants are gaming the system by falsely claiming persecution back home.

“A refugee is someone who has crossed a border because they don’t feel safe in their country,” Nezer said, obviating the prospect of the Central Americans applying for refugee status in their home countries.

She said the refugees have little choice but to turn up at the border and exercise their right to request asylum.

“There are no displaced person camps, Mexico is not safe for asylum seekers, particularly along the border,” where gangs and drug smugglers proliferate, Nezer said. “There’s no safe place for people to be processed, you’re not providing them a safe alternative place for them to apply.”

Ron Kampeas is JTA’s Washington Bureau Chief. He worked previously at The Associated Press, where he spent more than a decade in its bureaus in Jerusalem, New York, London and, most recently, Washington. He has reported from Northern Ireland, Afghanistan, Bosnia and West Africa. While living in Israel, he also worked for the Jerusalem Post.

See Also: Jake Novak: Comparing the Migrant Crisis to the Holocaust Is Dangerous for Jews