Peter Scully, the deputy county executive, has tested positive for COVID-19, and as a result much of the county’s response team is under quarantine, Bellone said. He is directing Suffolk’s government from his home office.

Also Monday, the governors of New York, New Jersey and Connecticut announced that at 8 p.m. gatherings will be limited to 50 people or less, all movie theaters, gyms and casinos will close and all bars and restaurants will cease to serve dine-in customers. Takeout and delivery service is still permitted.

NEW YORK (JTA) — The spread of COVID-19, a new coronavirus, is reshaping Jewish communities. We’re collecting the news flowing in from across the globe here.

As always, we want to hear from you. Have questions or tips? Get in touch or let us know how your community is responding to the coronavirus.

4 p.m. Mel Brooks promotes social distancing: Mel Brooks, the 93-year-old Jewish actor, plays a (nearly) non-speaking role in a public service announcement by his son Max Brooks about the need of social distancing. “If I get the coronavirus, I’ll probably be OK,” Max Brooks says. “But if I give it to him, he could give it to Carl Reiner, who could give it to Dick van Dyke, and before I know it, I’ve wiped out a whole generation of comedic legends.”

A message from me and my dad, @Melbrooks. #coronavirus #DontBeASpreader 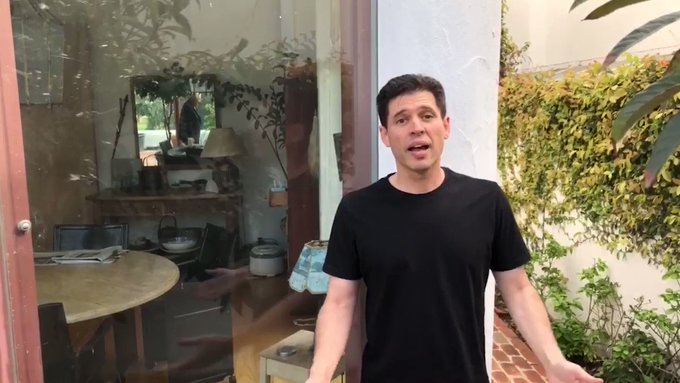 3:45 p.m. Germany closes synagogues and other houses of worship: German Chancellor Angela Merkel in a news conference on Monday announces severe nationwide measures to try to control the spread of the coronavirus. The government announced a ban on gatherings in synagogues, churches and mosques and ordered stores and playgrounds closed, AFP reported.

2:09 p.m. Public memorial of Argentina’s Israeli embassy bombing canceled: The Yeshiva Jajam Nissim Cohen, located in the Flores neighborhood of Buenos Aires, announced that a student in their community who had returned from Israel has tested positive for Covid-19. The yeshiva has shut down completely as a precaution.

All of Argentina’s schools closed today until at least March 31, and travel into the country is currently restricted. Some of the country’s synagogues remain open, but many are closing or at least ceasing most activity.

The Israeli embassy in Argentina also announced that for the first time in 28 years, the public remembrance demonstration to commemorate the bombing of the embassy on March 17, 1992, which killed 29 people, will not take place in the streets of Buenos Aires.

The Holocaust museum in Buenos Aires has been closed since last Thursday, without setting out a reopening date.

1 p.m. A coronavirus dividing line: “Coronavirus is upending our world by the minute, and when it comes to parenting, it also is yet another reminder of the divide between the haves and have-nots,” Amy Klein writes on Kveller.

12:37 p.m. Jewish schools in South Africa close for a week: The South African Board of Jewish Education decided to close the country’s Jewish day schools for one week, beginning on Monday, affecting about 8,000 pupils, Eyewitness News reported. The board noted that there are two cases of parents who tested positive for coronavirus in the Johannesburg school system, and one student who tested positive in a Cape Town school.

12:27 p.m. Rabbis call on Chicago synagogues to close:  The Chicago Rabbinical Council in a letter dated Sunday called on area synagogues to close effective immediately and said that individuals should pray at home, the Yeshiva World News reported. The letter also called for simchas, or Jewish celebrations, to be limited or postponed and to be “celebrated publicly when safe to do so.” Many local synagogues have ceased in-person operations already.

11:00 a.m. A muted swearing-in in Israel: Israeli President Reuven Rivlin swore in Knesset speaker Yuli Edelstein, Prime Minister Benjamin Netanyahu and Benny Gantz, head of Blue and White, on Monday afternoon in an empty Knesset chamber. Then lawmakers entered three at a time to be sworn in, in keeping with the government order to have 10 or fewer people in the room at a time.

8:56 a.m. Walking down the aisle: With gatherings limited to 10 people, Israelis sought creative ways to include family and friends in their wedding ceremonies. A photo making the rounds on social media showed an unnamed couple being married in the aisle of a supermarket, since the limit on the number of people who can be in a supermarket at any given time is 100 instead of 10.

IsraelB’s photo of the day. A wedding in osher ad! רק בארץ! 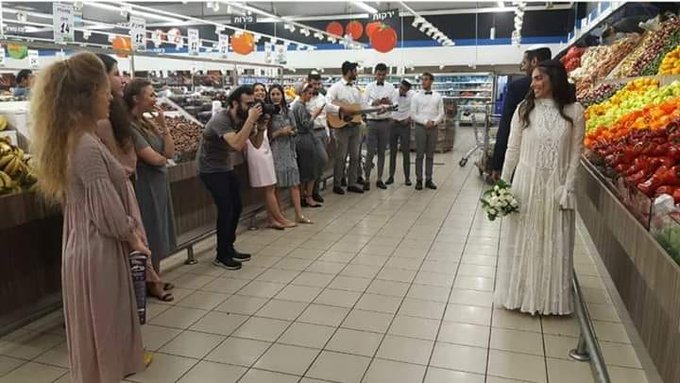 Hundreds of worshippers visited the Western Wall for morning services on Monday and dozens of bar mitzvahs took place with limited numbers of participants, the Western Wall Heritage Foundation said in a statement.