The page, called Rise Up Ocean County, had been called antisemitic by local leaders.

“We’ve been clear that this page trafficked in hate that has no place in NJ,” state Attorney General Gurbir Grewal wrote Wednesday on Twitter. “More to do to stop the spread of hate online, but this is a step in the right direction.”

It’s outrageous that just as our Jewish brothers and sisters are gathering to celebrate the Sabbath, “Rise Up Ocean County” decides to reinstate its page.

Is this really the kind of online community that @Facebook wants to cultivate?

For real this time.

FB took down the “Rise Up Ocean County” page. We’ve been clear that this page trafficked in hate that has no place in NJ. Now FB decided it violates their standards too.

More to do to stop the spread of hate online, but this is a step in the right direction. 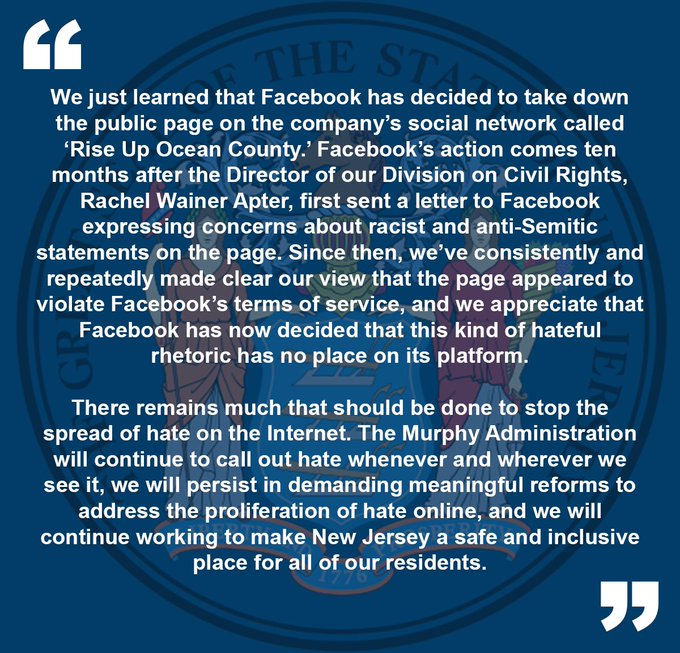 The page had been taken down temporarily in January but was later reinstated.

The group said its purpose was to mobilize locals to oppose overdevelopment around Lakewood, a town in the central part of New Jersey that has seen a boom in its Orthodox population. It encouraged members to speak out at town meetings and said it was producing a documentary.

One video posted early last year used a famous poem about Nazi Germany to warn about the dangers of Orthodox population expansion. It showed photos of crowds of Orthodox Jews set to ominous music.

The group, whose leadership was anonymous, had denied it was antisemitic.

“Whenever a particular group, whether they are orthodox Jewish, Christian, Muslim, Hindu, Atheist, black, hispanic, or white exercises complete control over any one element of government it is a danger,” the group said in a statement last year.