Try spending $60,000 for chicken, $31,000 for wine, $15,800 for eggs and a mere $5,500 for apples. And that’s before you factor in dessert.Of course, if it’s 600 families you’re feeding for a week-long holiday, then $171,000 doesn’t seem such an outrageous outlay.That’s what the folks at the Ohr Meir & Bracha Terror Victims Support Center spend to make sure that hundreds of families in Israel who have been affected by terrorism can truly enjoy a Jewish holiday (in the case above, Passover).

What’s more, they do this every single Thursday, enabling these families to welcome Shabbat with a tableful of healthful food.“After a bombing, a family is broken,” says Liora Tedgi, the founder of Ohr Meir & Bracha. “When they receive their basket, you can see on their faces that it’s such a relief to be able to have a Shabbat or a holiday to celebrate like anyone else.”

Tedgi comes to this mission from painful personal experience. Sixteen years ago, the mother of seven was five months pregnant with twins when, in the hours leading up to Tu B’Shevat, she was outside in her Beit Yisroel neighborhood of Jerusalem when a block away a terrorist had set a timer for a bomb to explode in his car. Thrown by the explosion, she began to bleed; later that night, she learned that she had lost one of her twins.

“I knew I had two choices: to stay in bed depressed or to do something for other people whose families had also gone through this,” she says. “And that’s what I vowed to do.”Once she’d recovered sufficiently and the surviving baby was born, Tedgi went to work.

‘I felt incredible support’
“Liora is still driven by that vow,” says Esther Shamal, a New York native who has been volunteering in the Ohr Meir & Bracha office for the two years since moving to Israel. “She often works till midnight and is up at dawn, making sure she’s there to meet the bread truck by 8 on Thursday mornings. Besides her family, serving the victims of terror is her life.”It started modestly enough, as Tedgi approached government officials to gather a list of families impacted by terrorism — a partnership that continues to this day.Beginning with 20 by the end of the first year, Tedgi’s list has increased to the 600 she’s able to feed for holidays, among them her weekly 400 Shabbat “guests.” She named the organization in honor of her guiding light, Rabbi Meir Brandsdorfer, and his wife, Bracha.
Much of the food is bought in bulk at the Jerusalem shuk from bakers, produce dealers and butchers who, knowing its destination, often give hefty discounts. Then the 15 to 50 volunteers of all ages—­sometimes whole groups of tourists — who turn out each Thursday morning transform bins of eggplants, tomatoes and potatoes, along with crates of chicken and challahs, into baskets for the families.
When asked, they say they do it because of people like Kaye Cohen. Her son sustained wounds to head and face in 2001 while riding to school on Bus No. 25 near Jerusalem’s French Hill and a terrorist opened fire, killing two teens and injuring many more. The family struggled as he spent years having surgeries, and slowly regaining his ability to focus and learn. “To receive this healthy food every week meant so much to us back then,” says Cohen. “And they took me on a retreat with other moms whose children had been hurt. I felt incredible support coming from Liora and everyone there.”
Marilyn Mack, who, with husband Lewis, signed up nine years ago to help soon after making aliyah from Leeds, England, says “we know these families don’t have enough money for food because they either can’t work themselves or are caring for their child, parent or spouse who was injured.” Although most recipients are able to pick up their baskets (one elderly widow uses a battered stroller to push her food home), a number of volunteers deliver to the homebound.

“Although she never really knows who’s going to show up on a Thursday morning to help, Liora has total faith the job will get done—and it does,” says Rabbi Chaim Goldsmith, who moved to Jerusalem 22 years ago from Manhattan. Three years ago, the rabbi began bringing his yeshivah students to pack food and now involves his own six children. “Last week, my 2-year-old daughter said, ‘I push tomatoes!’ ” 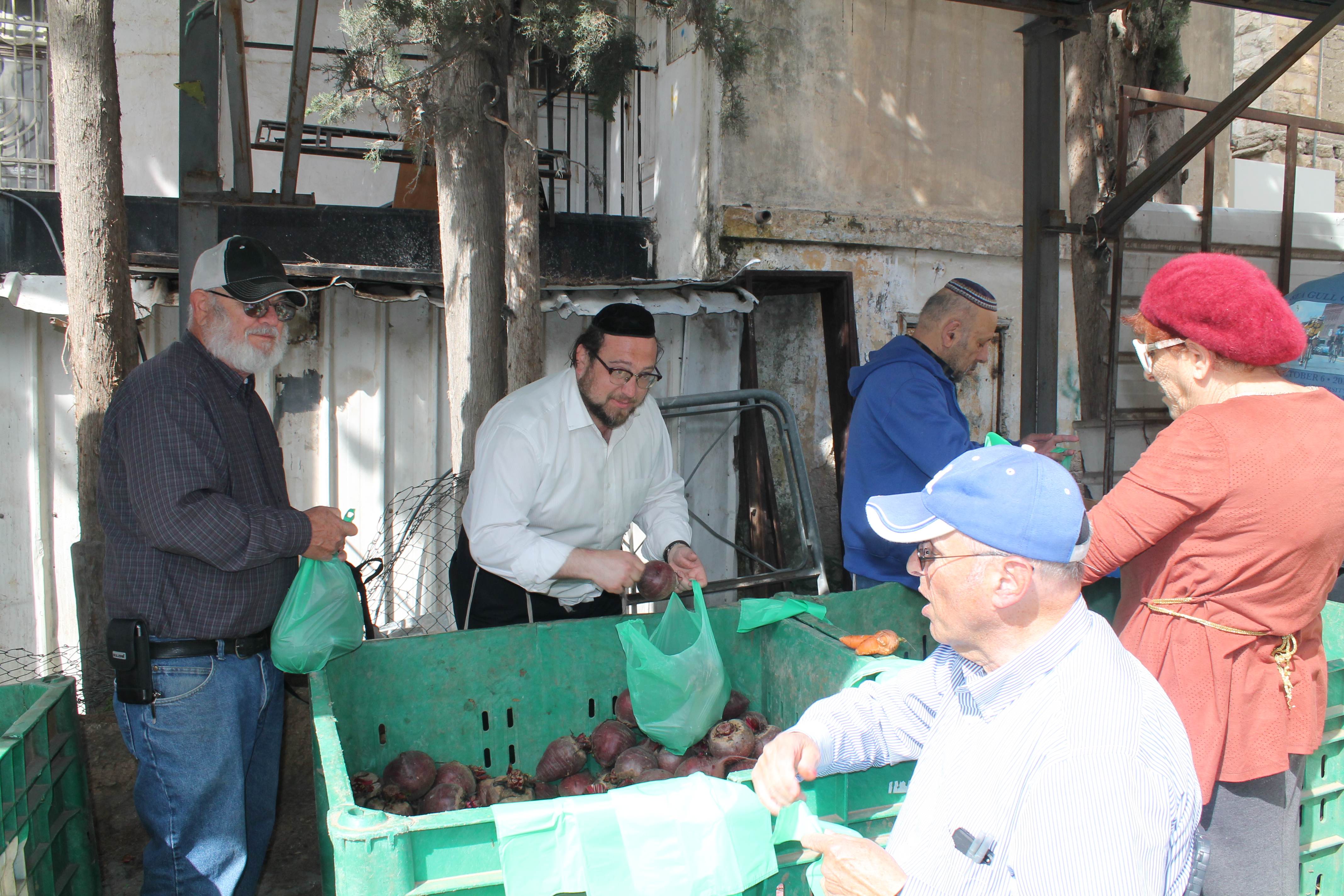 But Tedgi isn’t content to simply feed the victims. If their refrigerator conked out, a new one is soon delivered. And when she received crates of women’s walking shoes and blankets, she quickly found the feet and beds that needed them.

‘Everyone working together’
Ohr Meir & Bracha sponsors an after-school meal and tutoring program, making sure that these 60 children have the school supplies they need. And when one injured 14-year-old required a costly physical-therapy machine to walk again, somehow Tedgi found the money. She also throws Chanukah parties for 500 guests and makes sure hundreds of soldiers get mishloach manot baskets at Purim. (During the 2014 Gaza war, she supplied them with packages of underwear and socks, and prayer books, too.)Among more recent additions: a program inviting youngsters coming to Israel for bar or bat mitzvahs to experience packing items with their families, who often bring along gifts for the victims’ children. Tedgi makes a celebration out of each one, with refreshments and a “taking of challah” ceremony.
“I don’t know how she does it,” says longtime supporter Moshe Taub of the Flatbush neighborhood of Brooklyn, N.Y, who cheerfully admits that he twists friends’ arms to get them to donate. “She always needs money, but somehow accomplishes amazing things with whatever she gets.” (Each Thursday’s distribution costs between $5,000 and $7,000, depending on how donations are running that week).
The first time Taub witnessed the beehive of packing time, “it was incredibly moving to see everyone working together, and the elderly victims coming for their baskets. They hug and thank Liora, but she takes no credit for herself.” Taub notes that whenever he’s back in Israel, he saves Thursdays for this “hands-on experience of Jewish unity.”
Seventeen years after the bus bombing, Cohen’s son is married and a father, and his scars are covered by his beard. On the occasional Thursday, he can be found boxing up eggplant alongside a veteran who, when he was on base, had received Ohr Meir & Bracha care packages.
At 52, Tedgi shows no signs of slowing down. There’s still a waiting list of people who need food, job training and dental programs to set up, and an expanded after-school and day-camp program in the works (she’s already mortgaged her home to buy the building for it).
“To give to other people from myself, that is the best,” she says. “And even when it makes me sad to hear of a new victim, it also makes me stronger to do more for them.”
To learn more, visit www.terror-victims.org.il, facebook Ohr Meir U’Bracha, email office@terror-victims.org.il or call (718) 705-7444.