(JTA) — When Jacob Reich heard that Orthodox Jews would be staging a rally near his home to support President Donald Trump this weekend, just 10 days before Election Day, the Long Island father of two headed to Woodmere.

The Woodmere rally was one of several pro-Trump events organized this weekend across the New York City area by Orthodox Jews, who stand apart from the majority of American Jews for their support of the Republican Party and for Trump. Others included a larger rally in Marine Park, a neighborhood of Brooklyn, and a car parade that clogged traffic in Manhattan and Brooklyn. Counterprotesters threw eggs and other objects at the car parades and 11 people were arrested in connection to fights between the Trump supporters and counterprotesters Sunday.

In Woodmere, attendees filed into a parking lot as songs played from speakers, including a Jewish pop track reconstituted as an ode to Trump. The women, some wearing wigs and modest clothing, took up pink flags with the words “Women for Trump 2020” splashed across the fabric, while many men wore kippahs or baseball caps that said “Trump 2020” or “MAGA” spelled out phonetically in Hebrew letters.

The Woodmere rally billed itself as “pro-God, pro-freedom, pro-cops and pro-Trump.”

While some came ready to cheer on Trump’s Israel policies or support for religious freedom, others wore masks with messages like “worn by force, not by fear” and “this mask is as useless as the governor,” a reflection of the protests against COVID-19 restrictions that have roiled New York area Orthodox communities in recent weeks. Indeed, the rally underscored the degree to which values within the community are in tension right now, even as most members are backing the same presidential candidate.

The list of speakers, which was in flux most of last week, included former Brooklyn Assemblyman Dov Hikind; Rabbi Yitzhak Smith, Rabbi of Beis Menachem (Chabad) of Passaic-Clifton. Chabad Rabbi Michoel Green of Crown Heights, and Dr. Pastor Aaron Lewis of Family Church in Hartford, Connecticut. Dr. Gila Jedwab, who has a dental practice in Cedarhurst, and Woodmere resident Michal Weinstein were among the organizers.

The turnout was sparse, but many Five Towns residents said they watched the rally on Livestream.

In one searing moment, Rabbi Smith’s diatribe against mask-wearing caused a former New York State Assemblyman Dov Hikind, to threaten to walk out of the rally.

“I’m not here to endorse any of the flags, symbols, posters and so forth that are here because I think it’s very important that we rise above the personalities,” Rabbi Yitzchak Smith told the crowd decked out in Trump 2020 flags and hats. A rabbi and lawyer living in Passaic, New Jersey, Smith has recently gained a following by promoting the idea that COVID-19 testing is a government ploy to hurt Orthodox Jews.

Smith appeared to praise those who flouted school and synagogue closures during the pandemic, then urged rally attendees to do the same now.

He went on, “Are you willing to pull your children out of schools that demand daily health affirmation, that put masks before children’s breathing, that teach that God is wearing a mask … and that are brainwashing our kids right now every day into taking a vaccine — are you willing to take your kids out and build a new option?”

The speech distressed Hikind, who was standing to the side, waiting to speak. He shook his head throughout portions of Smith’s speech before approaching one of the organizers, seemingly to voice his concerns, and then walked to the small stage to make his feelings clear.

Hecklers encouraged Hikind to leave as he walked across the parking lot, followed by some of his supporters. Soon Michal Weinstein, one of the organizers, approached him and convinced him to stay. “We don’t agree with him,” one woman told Hikind, referring to Smith. And after another speaker, Hikind took the stage, setting a very different tone.

“It is important to wear a mask, it is important to pray … It is not the biggest sacrifice in the world to wear a freaking mask even if you don’t think it works, maybe you’re protecting someone else,” Hikind said before turning to the subject he most wanted to speak about Sunday. “But that’s not why I’m here. I’m here to talk about the future of this country. I’m here to talk about the person who has possibly been one of the greatest presidents ever.”

Hikind, a longtime Democrat, went on to denigrate the Democratic party and praise Trump for his policies on Israel and criminal justice reform while noting his distaste for Trump’s manner of expressing himself. (He outlined those points in a video last week announcing that he would vote for Trump after not doing so in 2016.)

Just minutes after walking away from the rally, Hikind was leading the crowd in cheers of “four more years.”

He would do it again later that day, whipping up a larger crowd at a rally in Brooklyn’s Marine Park. There, he appeared alongside Boris Epshteyn, an Orthodox adviser to the Trump campaign, who touted Trump’s work on antisemitism on college campuses.

“President Trump is stomping out antisemitism on college campuses and universities, because from now on out anti-Semitism will be forever recognized as a hate crime,” Epshteyn told the assembled crowd, referring to Trump’s executive order that that made the Civil Rights Act of 1964 apply to Jewish college students.

At the same time as the event on Long Island, Orthodox Jewish Trump supporters drove through Manhattan and Brooklyn with Trump flags billowing from their cars.

A visible figure at some of the rallies Sunday was Heshy Tischler, the Borough Park radio host, ex-convict, City Council hopeful and provocateur who led Brooklyn’s Hasidic Jews into the streets earlier this month to protest pandemic restrictions on Orthodox neighborhoods with rising COVID-19 cases. Tischler was arrested last week for inciting a riot against a Hasidic journalist. He was released the next day.

At the Marine Park event, Tischler screamed the words “Trump 2020” from a bullhorn and danced with the crowd. Videos circulated on social media throughout the day of Tischler dancing in a party bus decorated with Trump signs and posing with Trump supporters during the car parades. 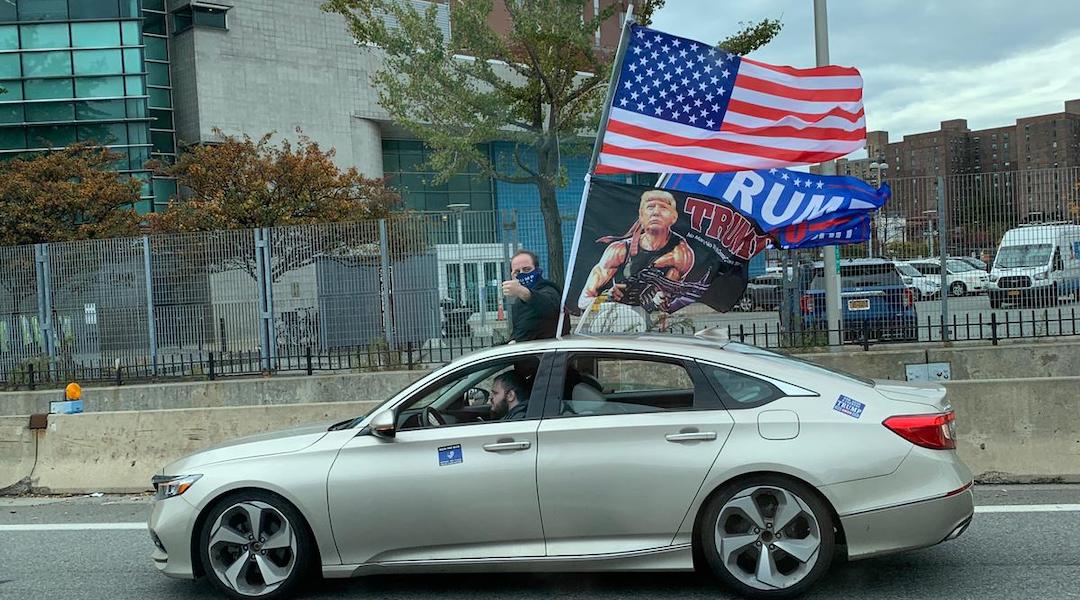 Earlier in the day, Tischler joined another car parade in support of the president and stopped to make a video in front of Trump Tower in Manhattan’s Columbus Circle.

“Mr. Trump, I’m sorry for all the other idiots who are not voting for you, but I’m voting for you, we’re going to make sure the votes go through,” he said in a video with Trump Tower visible behind him and a small crowd of supporters and journalists huddled around him. He added: “Right now, I see a lot of support for Mr. Trump. I see this city turning red.”

Like Smith, Tischler rose to fame this summer for protesting government restrictions on Orthodox areas that were intended to stop the spread of the coronavirus and casting doubt on the accuracy of COVID testing.

While many of the people in attendance in Woodmere said they were not driven by resistance to COVID restrictions, it was clear that the calls to protect religious freedom represented them all under the banner of the Trump 2020 flags.

“I think people have been heavily debating what religious freedom is,” said Reich, who said his support for the president was animated more by other issues. “I think Trump has helped the cause, certainly what he’s done with his foreign policy, supporting the Jewish state, moving the embassy to Jerusalem.”

See Also: 21 artists who don’t want President Trump to play their music at his events