In an era in which support for Israel within the Democratic Party is waning, strong Democratic Israel allies are as important as ever to a Jewish state that desperately seeks to retain bipartisan support.

In New Jersey, three-term Sen. Robert Menendez — the Democratic Party’s ranking member on the Senate Foreign Relations Committee — has been a reliable friend to Israel.

Come November, Menendez will face Republican challenger Robert Hugin, a longtime pharmaceutical executive with 14 years of military service and deep pockets to fund his own campaign. Hugin was considered little more than an afterthought in the early months of the campaign. Yet a recent Fairleigh Dickinson University poll just prior to the primaries revealed Hugin’s support at only 4 percent below support for Menendez, with a significant portion of the state remaining undecided.

In the Republican primary, Hugin charged to an easy victory, recording 75 percent of the vote against Brian Goldberg.

This week, the well-funded senator mustered less than 60 percent of the vote in the Democratic primary to defeat the substantially lesser-funded Lisa McCormick. An incumbent would typically have cruised to a more substantial victory.

“I take immense pride in having spent my entire career leading the charge for the United States and Israel to share an alliance that is unbreakable and ironclad,” Menendez told JNS. “As the leading Democrat for foreign policy in Congress, I will always stand up for three fundamental truths. One: The security of the United States is strong when our bond with Israel is strong. Two: The Jewish people have a right to live in peace, security and prosperity in the indisputable homeland of their ancestors. And three: Israel has a right to defend herself, and the United States will always ensure she has the capabilities necessary to protect her people and her borders.”

Yet scandals in a state plagued by government corruption over the past several years have placed Menendez’s hold on his Senate seat in doubt, leaving people wondering who may spearhead support for Israel within the Democratic Party, as well as within New Jersey, where fellow Democratic Sen. Cory Booker is not considered to be as strong a supporter of Israel as his veteran counterpart.

Despite being cleared of corruption charges that forced Menendez to temporarily step down from his position in the Senate Foreign Relations Committee, the Senate Ethics Committee “severely admonished” Menendez, stating in a four-page bipartisan “letter of admonition” that his actions “risked undermining the public’s confidence in the Senate.”

In a state with the fourth-highest number of Jews — more than 500,000 — a candidate’s positions on Israel portend to be an important issue. And while Hugin lacks a deep connection to Israel, he recently visited during the inauguration of the new U.S. embassy in Jerusalem to start learning more about Israel and its security needs, and building his pro-Israel bona fides.

“It is inspirational to be here at a time when we are seeing the country come together about the movement of the embassy and recognition that Jerusalem is the capital of Israel,” he said.

U.S. embassy was a ‘partisan occasion’

While Hugin, who currently works in the private sector, did not receive an invitation to the embassy inauguration, he lamented that no Democratic congressmen or senators attended the opening ceremony.

Nonetheless, Menendez declared his public support for Trump’s embassy move, stating, “I have always supported moving the United States embassy to Jerusalem, and have always said it is not a matter of ‘if’ but ‘when,’ ” while noting that Trump’s decision “reaffirms 20 years of United States policy.”

Menendez’s office explained to JNS that “Republicans decided to make this a partisan occasion. The White House did not invite any Democratic member of Congress to attend the opening ceremony.”

“In American politics today, the partisanship has gone too far,” Hugin countered. “Some of the issues we now have, even on Israel, are that people are putting their domestic partisan politics and positions over the people and the policy because they don’t want to support someone like President [Donald] Trump on these issues, even when the specific issues shouldn’t be partisan to begin with.”

‘Not contesting’ Menendez record on Israel

Hugin acknowledges that even as other Democratic senators and congressman have withered in their support of Israel in a policy shift that began during the presidency of Barack Obama, Menendez has remained a strong supporter of Israel.

“I am not contesting his record on Israel,” stated Hugin.

Ben Chouake, national president of NORPAC — a nonpartisan political-action committee that supports candidates, and sitting members of the U.S. Senate and House of Representatives, who demonstrate a commitment to the strength, security and survival of Israel—wrote in a recent op-ed that “Senator Menendez has a long history as one of the staunchest supporters of the Jewish community and the State of Israel,” commending Menendez for being “a fierce critic of the Boycott, Divestment and Sanctions [BDS] movement, and of anti-Semitism in Europe, the Middle East and on college campuses right here at home. … I have found no stronger and consistent advocate on our issues than Senator Menendez.”

It was recently reported that NORPAC helped raise $100,000 for the Menendez campaign in 2017. 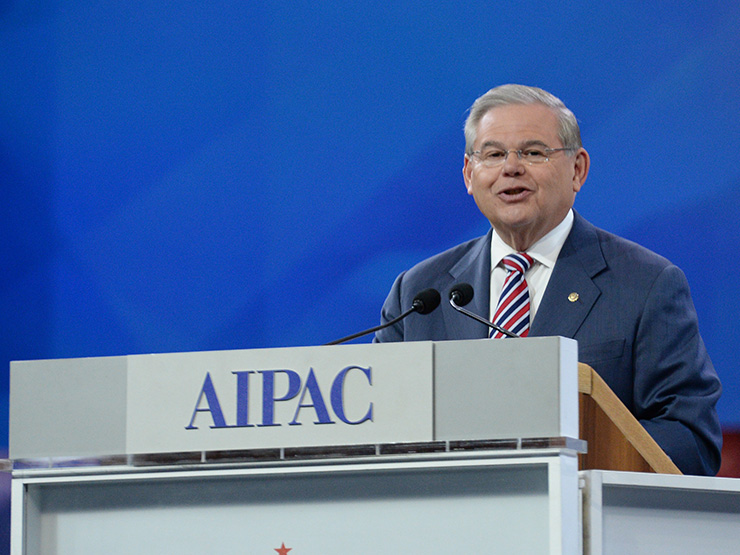 And though the Republican challenger lacks the polished, pro-Israel messaging that Menendez has nearly perfected during his 25-year career in the House of Representatives and the Senate, Hugin insists “I will be just as good on Israel as Senator Menendez, so I don’t think that there will be any loss there, and possibly even an improvement, especially on the Iran issue.”

Withdrawal from the Iran nuclear deal

In 2015, Menendez crossed party lines to oppose Obama’s signing of the Iran nuclear deal. Menendez noted that he was “co-author of the [original] sanctions regime” against Iran, and then “led the opposition to the JCPOA [Joint Comprehensive Plan of Action] under the Obama administration.”

Yet, Menendez adhered to Democratic Party doctrine by opposing Trump’s recent withdrawal from the deal.

“It is a tactical mistake for the Trump administration to walk away from this deal without a strategy for ensuring that Iran does not restart its nuclear-weapons program without a plan for countering Iran’s dangerous non-nuclear activities, and without our allies and partners,” Menendez told JNS.

Hugin told JNS that “it’s ridiculous to say that either you have nothing, or you have an agreement that is not really effective.”

He added that “Iran has used the resources they received from the United States [as part of the deal] to export terrorism. Whether you look at recent elections in Lebanon or their activities in Syria, Iran has used that money not to build a domestic economy and a more peaceful state, but they have used it to export their worldview of how they want to see the Middle East and beyond.”

Add to that, Hugin continued, “the fact that the agreement didn’t provide for oversight of activities on military installations.  Where else were they going to build nuclear weapons but on military facilities?  So, the agreement failed to deliver what was advertised.”

He suggested that Democratic senators who initially opposed the Iran nuclear deal later opposed its withdrawal, just because of their collective opposition to any and all policies instituted by Trump.

“If someone does the right thing on a certain issue, we should support it regardless of party affiliation,” the New Jersey challenger said, while noting that he is not afraid to publicly disagree with Trump on any issue where he holds an opposing view.

Yet despite the policy differences, both Hugin and Menendez agree that Iran must never be allowed to acquire nuclear weapons.

“We have a responsibility to understand the delicate complexities of this issue,” said Menendez. “We need to be clear-eyed about our ultimate goal of ensuring Iran never becomes a nuclear state.”

Years in the U.S. Marine Corps

While Hugin lacks the credentials in dealing with the Middle East that Menendez boasts, he has spent significant time overseas as a member of the U.S. armed forces. Hugin served for 14 years in the U.S. Marine Corps, seven years in active duty and another seven years in the reserves in several countries throughout the Western Pacific, and then in northern Europe, where he was stationed together with NATO forces. Two of his sons are now entering service as well.

“I learned very quickly that if you value your peace at home and your freedoms, you need a strong defense,” he said. “And I think that is part of the bond that America shares with Israel. If you don’t have a strong defense and you don’t support Israel in a strong way, how can you believe there will be peace in Israel?

He expressed his admiration for the leadership of Israeli Prime Minister Benjamin Netanyahu, saying “he is committed to the vision of what Israel should be and is a proud defender of the principles and philosophies that make the character of Israel.”

Hugin appreciates Netanyahu not only as a “brave and courageous” defender of Israel in international forums, but also noted from his own perspective as a successful businessman focused on pharmaceutical technologies that “the impression you get from the outside is that the prime minister values investment in research and technology, and investment in the future. If you invest in the future, you are going to have a better economy today, not just tomorrow.”

Back at home, Hugin expressed tremendous appreciation for the work that U.S. Ambassador Nikki Haley has done at the United Nations. “We are lucky to have Nikki Haley serving the United States, and I think she is helpful for all countries that share the same values, and particularly, Israel,” he said.

Hugin insisted that if he becomes a senator, his trips to Israel will become more frequent. “I am going to be a strong supporter of the values that Israel has, and I will be very proud to come back here and discuss the issues again on a regular basis as I represent the people of New Jersey.”