The International Fellowship of Christians and Jews has mobilized to raise more than 1 million shekels (about $275,000) in emergency assistance for residents of moshav Mevo Modi’im, a small agricultural community west of Jerusalem near the city of Modi’in. The moshav sustained a massive fire on May 23 that destroyed at least 40 out of the community’s 50 homes.

From that, the Fellowship will be providing up to $5,000 in assistance for each family in Mevo Modi’im.

The fire, one of many around Israel that began in temperatures exceeding 100 degrees during a heat wave last week, was large enough to have damaged some 7,940 dunams of land belonging to Israel’s Nature and Parks Authority and Keren Kayemeth LeIsrael-Jewish National Fund. Originally assumed to have been caused by faulty electrical wiring, the fire is now being investigated as a possible incident of arson.

Mevo Modi’im was founded by the late Jewish singer and composer Rabbi Shlomo Carlebach. Known as “the Singing Rabbi” during his lifetime for his many original tunes and styles of prayer, Carlebach inspired many people, some of whom followed him to Mevo Modi’im.

“Every Sabbath eve, the men of the moshav would come to our house,” said Rabbi Carlebach’s daughter, Dari Carlebach, standing in her father’s old home with the Fellowship’s president, Yael Eckstein, the daughter of its founder, Rabbi Yechiel Eckstein, by her side. “My father had a special perfume, which everyone said was special, that he would spray each one of them with for the Sabbath. On Sabbath morning, the guys would be in the kitchen eating and drinking coffee, sharing words of Torah. Even at three in the morning, people would stop by the home to consult and speak with my father.”

Unsurprisingly, the moshav’s residents followed in the rabbi’s footsteps. “There’s no one like the people of Mevo Modi’im,” continued Dari Carlebach. “They do not have a lot of money, but their houses are open for guests all the time. Now they need a lot of help. Many are left with nothing but the clothes on their bodies. Their money has been burnt along with all their property.”

Nevertheless, she remains determined that Mevo Modi’im will overcome the destruction.

“My father said that fire can destroy and kill, but one’s internal fire cannot be extinguished. I know that the internal fire has not been ‘burned,’ and that this moshav will once again thrive because the nation of Israel is very strong,” she said. “It is impossible to burn the heart that dwells inside the collective soul of the moshav.”

Yael Eckstein conveyed the Fellowship’s determination to help the moshav rebuild: “The Jewish community immediately turned to us to provide the emergency aid in light of our track record in responding to every other emergency in Israel, including our prior donation of eight firetrucks and basic needs to victims in previous fires.”

She noted the contributions and support of Christian friends of Israel, who provided matching funds, saying “during times like this, one can see who is there to respond immediately — not only from the Jewish community, but from millions of Christians around the world.” 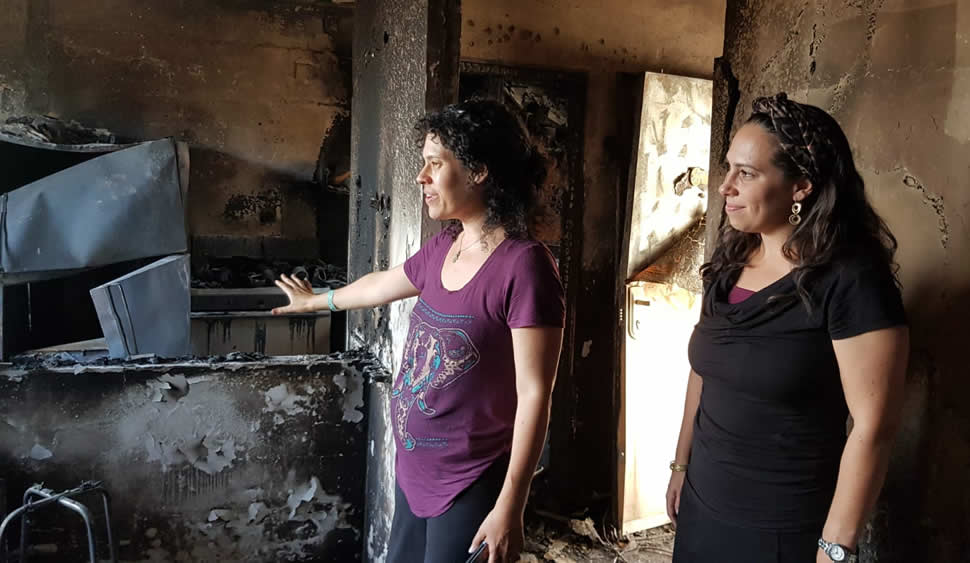