As evening approached, and the heat of another scorching summer day in Jerusalem broke, more than 300 young women from 16 different countries across Europe proudly marched into the fan-filled stadium at the Kraft Family Sports Campus in a sea of their country’s colors on Monday, getting ready for opening ceremonies.

Welcome to the 2019 European Lacrosse Federation (ELF) Women’s European Lacrosse Championship, held this year in Israel, where for 10 days teams will battle it out on the field to see which squad will stack up to earn the title of best team. The opening ceremonies and one opening night game were held in Jerusalem, with the rest of the tournament taking place in Netanya.

Therefore, players, coaches and Israeli lacrosse officials alike have high hopes for the women’s national team to earn a medal in the current tournament.

One of the founders of the nonprofit Israel Lacrosse Association (ILA), which is the national governing body of the sport of lacrosse in Israel, is Seth Mahler. Mahler, who made aliyah to Israel from Connecticut, says he helped introduce the sport in 2013, when he and several other lacrosse players and enthusiasts started a youth program in the coastal city of Ashkelon.

The goal, according to current ILA Chief Operating Officer (COO) David Lasday, who also helped introduce the sport in the Jewish state, was to open activities in Israel’s periphery to make the game accessible to all.

Mahler says that today, more than 700 youth players participate in lacrosse clubs, leagues and clinics throughout the country. Adult teams also meet to play as well.

In regard to the Women’s European Championships, Mahler stresses that it isn’t just about the competition itself, telling JNS that when the players aren’t on the field for games or practices, teams are given a chance to tour parts of the country. “We are hopefully using lacrosse to create ambassadors for Israel,” he says.

Acknowledging his bias, Mahler says that certainly, the Israeli women’s team “is in the conversation for a gold medal” in the tournament.

He adds that “lacrosse is special for me because I get to meet people from all over the world. I get to pioneer something in a country that feels like home to me. And we have already brought thousands of people from all over the world to Israel specifically that may or may not have been here before or would never think to come here, and we get to utilize lacrosse to do that.”

‘Connect Jews from around the world’

So who are some of those thousands who have arrived in Israel to play?

Lasday explains that many have had the opportunity not only to visit Israel, but to do so through their love of the game, thanks to special lacrosse-focused Israel trips, including a Taglit-Birthright program called “Lacrosse Birthright.”

“One of our missions is to connect Jews from around the world to Israel,” he tells JNS. “We bring 400 to 500 Jewish lacrosse players to Israel each year either through our Taglit-Birthright trip or other trips.” The college students who arrive on “Lacrosse Birthright” come to Israel with a bag of donated lacrosse equipment for local Israeli youth players, he noted.

One of the “Lacrosse Birthright” alumni who arrived at the field for the opening ceremonies and game was 22-year-old Los Angeles native Nate Galper. Galper, who just finished his Birthright experience, decided to extend his trip in order to play more lacrosse in a Netanya summer league. Even though he is an American citizen, Galper says he came out to show his support for “our Israeli national team.”

He told JNS that the program “allowed us to do what the kids on regular Birthright are doing, but also gave us the chance to play lacrosse in this ridiculous country.” (When pressed, he clarified it as “amazing.”)

Galper added that Israel is “nothing I’ve ever seen before. It ended up being one of the most amazing trips ever.”

He said it wasn’t just because he got to play lacrosse, but because those on the program who play “have similarities to you psychologically—similar senses of humor, similar activity preferences, etc.” 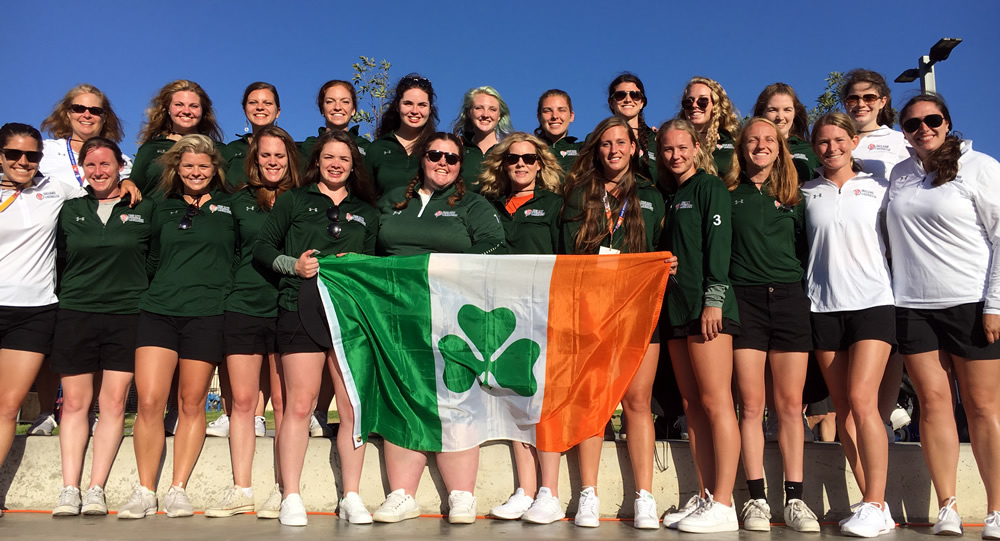 ‘We have pretty high expectations’

An hour before the opening ceremonies, two of the women’s teams took the field at the sports campus for an exhibition game, while the other teams were hanging out in the stands, taking selfies with their teammates and embracing friends from other countries.

Georgia Chahalis, 19, plays for the Greek national team. Though she lives in the United States, she identifies as a Greek American and decided to represent Greece in the competition.  Chahalis explains that this is Greece’s first major international competition, and the team is there to give it their all in order to qualify for future tournaments.

She tells JNS that this is her first trip to Israel, and that “Israel is great—we just toured Jerusalem, and I really like it here.”

She says the tournament is giving her the chance to combine her two passions. “I’ve been playing lacrosse for 10 years, and I absolutely love it. And Greece is my home more than America is, so it’s a chance to combine my two favorite things in a country I probably would not have come to otherwise.”

Standing behind her was Cathy Samaras, who was referred to by those in the area of the Greek team as “The godmother of lacrosse.” The spirited Samaras, who resides in Annapolis, Md., is the former president of the U.S. Women’s Lacrosse Association, and is credited as introducing the sport on a competitive level to the women and female youth in Greece. She says that she has traveled to Greece for lacrosse-related activities six times in the past 24 months.

Samaras told JNS that since this was the Greek women’s first major competition, their goal wasn’t necessarily winning the tournament, but rather “to get a feel for the game on this level.”

She explained that “in Greece, girls don’t play anything but soccer, so they’ve never used their hands for any sport. But now that they know how to handle a stick [the ‘crosse’], the biggest thing is getting them together, and they’ve had more fun than a barrel of monkeys, no joke! So for them to take the field for the first time as a team … Oh, my gosh!”

Nearby, the Israeli women’s team was getting warmed up. As hosts, they were competing against Germany following the opening ceremonies.

Dylan Teitelbaum, 23, made aliyah less than a year ago from Long Island, N.Y. As in other areas of the U.S. East Coast—where the Native American game made itself known among women as early as 1914 at Sweet Briar College in Virginia and soon made its way up north — she has been playing since the age of 10. In fact, Teitelbaum played competitive lacrosse at an NCAA Division III level at Frostburg State University in Maryland.

Teitelbaum, who also coaches female youth players in Netanya during her spare time, discussed her mindset with JNS going into the tournament. “We have pretty high expectations; we know we’re going to have some tough competition. We’re not expecting it to be easy, but we want to put up a fight—and show the other teams what’s up!”