AMHERST, Mass. (JTA) — For the second time in six months, several high-profile proponents of the Boycott, Divestment and Sanctions movement against Israel are sharing a stage at the University of Massachusetts at Amherst — and prompting concern and counteractions from pro-Israel students.

Palestinian-American activist Linda Sarsour, Harvard professor Cornell West and other BDS supporters are due to appear at a Nov. 12 event  at the university’s main campus titled “Criminalizing Dissent: The attack on BDS and pro-Palestinian speech.” Omar Barghouti, a founder of the BDS movement who was denied entry to the United States in April, will participate by Skype.

The event has heightened tensions on the western Massachusetts campus and prompted vocal opposition from local Jewish groups.

It also comes amid a spate of antisemitic vandalism at UMass and nearby Smith College. Five swastikas were found painted on the UMass fine arts center last week, and a week before that multiple swastikas were removed from buildings at Smith. The heads of both schools condemned the acts.

In May, a Massachusetts judge refused to issue an injunction against a similar event after a lawsuit was filed on behalf of several unnamed students who argued that the event was anti-Semitic.

“Many students and members of the UMass community feel deeply upset by the scale, tenor and dogmatic messages of the anti-Israel events,” said Rabbi Aaron Fine, executive director of Hillel at UMass Amherst. 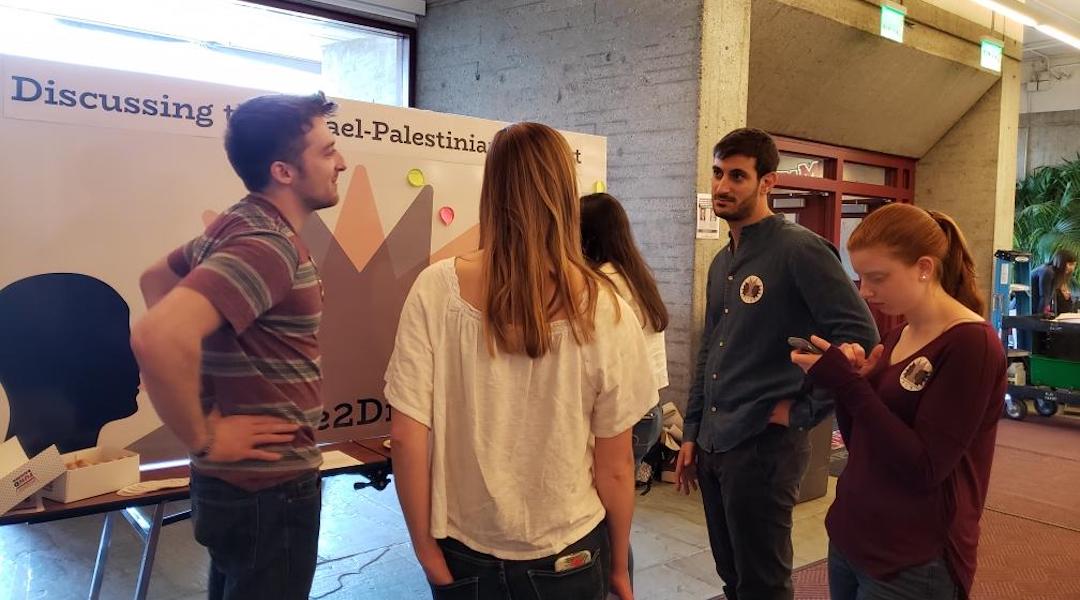 Benjamin Alvarez-Dobrusin, left, a junior at UMass Amherst from Marblehead, Mass., is involved in Israel advocacy on campus through Hillel and Student Alliance for Israel. (Courtesy of Alverez-Dobrusin)

The university seems to agree, though it has declined to block the event on the grounds of academic freedom and because, as a public institution, it must rent its facilities to private groups on a “content-neutral” basis.

In a statement last month, Chancellor Kumble Subbaswamy said the school firmly opposes academic boycotts of any kind and expressed concern that the event, which he described as “one-dimensional and polarizing,” was potentially alienating to Jewish students and undermining of the campus’ commitment to inclusivity.

“Despite our concerns regarding this particular gathering, based on its title and past statements by its panelists, as a public institution UMass is bound by the First Amendment to the Constitution to apply a content-neutral standard when making facilities available to outside organizations,” Subbaswamy said. “For this reason, and in adherence to the principles of academic freedom, the university will take no steps to inhibit this event.”

Jewish groups welcomed the chancellor’s statement. The AMCHA Initiative, a national organization that combats anti-Semitism on campus, the local director of the Anti-Defamation League and Hillel’s Fine praised the chancellor for his opposition to academic boycotts and commitment to free speech.

“It’s becoming increasingly difficult for Jewish students to be open for their support of Israel and sometimes students find themselves isolated,” Robert Trestan, the director of the New England ADL chapter, told the Jewish Telegraphic Agency in a phone interview.

But a number of UMass faculty members felt the chancellor’s statement did not go far enough in defending academic freedom. An open letter to Subbaswamy signed by more than 130 faculty expressed “deep disappointment” with the statement and took issue with, among other things, the chancellor’s singular concern for the feelings of Jewish students.

“While we acknowledge the often strong feelings of Jewish students on this issue, how are Palestinian students, other students of color, and Muslim students, many of whom see a genuine connection between struggles for equality and dignity in the United States and the Palestinian struggle, supposed to feel when the chancellor demeans the voices of leading civil rights leaders, including Angela Davis, Linda Sarsour, and Cornel West?” the letter said.

The Nov. 12 event is presented by the Media Education Foundation, a private group founded by Sut Jhally, the chair of the college’s communications department and a harsh critic of Israel. Along with Sarsour, West and Barghouti, it will also feature the prominent anti-racism activists Shaun King and Tim Wise, and Dima Khalidi, founder of Palestine Legal, a Chicago-based group that provides legal support to pro-Palestinian activists.

In response, pro-Israel groups are sponsoring an action of their own, a march under the banner “End Polarization: Promote Peace” that will be held at the same time as the BDS panel.

“We want to show there is a whole different community that believes deeply that we can have opposing views” without demonizing the other side, said Benjamin Alvarez-Dobrusin, a student leader with Student Alliance for Israel, a Hillel-affiliated pro-Israel group.

For Noam Borensztajn, a sophomore who was born in Israel and also is active with Student Alliance for Israel, it’s important to promote programs that present the nuances of the complex conflict.

“It’s not just the black and white that I think they often present,” Borensztajn said of the BDS movement.

Borensztajn and Alvarez-Dobrusin expect several hundred students to participate in the march, which they consider part of their work with Bridging the Divide, a Hillel initiative to build relationships with diverse campus communities. Borensztajn would like to see collaborative programs on the Israeli-Palestinian conflict that are not as divisive.

“Hopefully this is the start of something larger,” he said.