(September 7, 2022 / JNS) Israeli security forces arrested 25 terror suspects across Judea and Samaria in a series of raids overnight Tuesday, according to the Israel Defense Forces. Illicit funds and weapons were also seized.

During a raid in the Fara’a refugee camp northeast of Nablus, IDF forces were fired upon and attacked with an improvised explosive device, the military said in a statement. No Israeli casualties were reported. Palestinian sources reported that one person had been killed in the clash.

“A Palestinian claim of a casualty is known to us,” said the IDF.

Meanwhile, the Israel Security Agency (Shin Bet) announced on Wednesday that, together with the Israel Police, it had arrested over the past two months five Arab Israeli suspects on suspicion of assaulting a Jewish man during the May 2021 widespread disturbances that erupted during “Operation Guardian of the Walls.”

In the May 12 incident, the victim, Mor Janashwili, was set upon by a mob that hurled stones and other objects at his car, and then pulled him out and assaulted him using clubs and metal bars before setting fire to the vehicle.

Janashwili lost consciousness during the attack and was rushed to hospital, where he spent a considerable amount of time recovering, the Shin Bet said.

The five suspects have been charged and will stand trial. They join two other Acre residents who were arrested in May 2021 and charged.

The Shin Bet said it would not cease tracking down those involved in activities that endanger state security, including those who took part in violence during the May 2021 disturbances. 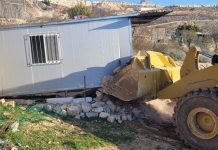