NEW YORK (JTA) — The spread of COVID-19 is reshaping Jewish communities. We’re collecting the news flowing in from across the globe here.

As always, we want to hear from you. Have questions or tips? Get in touch or let us know how your community is responding to the coronavirus.

Sign up to get one short email every afternoon with all of the day’s updates.

In Israel, masks become mandatory: The director-general of Israel’s Ministry of Health signed a directive that makes wearing a mask in public mandatory beginning Sunday evening.

Antisemitism in Germany rises with number of coronavirus cases:  “There are direct links between the current spread of the coronavirus and that of antisemitism,” said Felix Klein, Germany’s antisemitism commission, in Berlin, AFP reported.

Special Seder delivery: Uber and the nonprofit Metropolitan Council on Jewish Poverty are joining forces to deliver 500 Passover meals to homebound Holocaust survivors who will be alone in their homes on Seder night, the New York Post reported.

For your Passover listening pleasure: Some lighter news, for a change: the Israel Philharmonic Orchestra released a video of 20 of its musicians playing a medley of Passover songs. Each instrumentalist recorded their parts, arranged by IPO trombonist Micha Davis, from their homes.

Israel on lockdown: Israelis will be under a general lockdown through at least Friday, Prime Minister Benjamin Netanyahu announced Monday. That means Israelis will be barred by law from leaving their houses on the first night of Passover Wednesday.

As of Monday evening, Israel had 8,904 confirmed cases of the coronavirus, with a death toll of 57.

Facetime funerals: Regular mourning practices have been suspended for weeks, so what does a funeral in the age of coronavirus look and feel like? Daphne White writes in the Jewish News of Northern California about attending her mother’s funeral by FaceTime: “My parents belong to a very traditional Conservative synagogue, but the fact that only four people were physically present at the service was not even remarked upon by the rabbi. Such are the times we live in.”

Permission granted: The founder of the movement to boycott Israeli products says that if a coronavirus vaccine is developed in Israel, people should not hesitate to use it.

Bonds of Life: Among the people we added today to our Bonds of Life coronavirus memorials project is an Israeli father of 11 who was known for feeding crowds who came to his city to celebrate the end of a second-century plague.

Orthodox Union reverses course on Passover seders: Last month, the Orthodox Union, a coalition of Orthodox groups, advised that single people could join other families’ seders under specific circumstances. Today, the group reversed course, saying that no travel for Passover should take place for any reason.

A very Jewish face mask hack: You might have seen the memes already: kippahs, Jewish head coverings, being used as face masks. But they actually work, and now that Americans are being urged to wear masks in public, here’s a video tutorial by the editor of the St. Louis Jewish Light that explains how to turn a bar mitzvah souvenir into a public health supply.

IDF troops trade guard duty for food delivery: The Israel Defense Forces will deliver about 2 million pounds of food to needy residents of the haredi Orthodox city of Bnei Brak, which is completely locked down due to the large number of residents with the coronavirus, before Passover begins, a senior military official told the Times of Israel.

Remembering Holocaust victims from home: Yad Vashem, Israel’s Holocaust memorial based in Jerusalem, in lieu of public gatherings to remember the Holocaust and to read aloud the names of Holocaust victims, is asking the international public to record themselves reciting names and share the video on social media using the campaign’s hashtags #RememberingFromHome #ShoahNames.

Medical supplies winging their way to Israel: A plane carrying 20 tons of essential protective equipment for medical teams from China landed at Ben Gurion airport early this morning, and a second at noon, Israel’s Ministry of Defense announced. A total of 11 such flights will arrive through the rest of the week.

Chinese alumni of Bar Ilan U send medical equipment: Three shipments of medical equipment — including protective suits, face shields, eye goggles, N95 masks, and surgical masks — will arrive in Israel from China, much of it donated by the Bar-Ilan University Alumni Association in China, the university said in a statement. The equipment will be headed to the University’s Azrieli Faculty of Medicine in Safed for use by medical-academic personnel and medical students who have been volunteering in emergency rooms, hospitals and community clinics throughout Israel during the coronavirus crisis. The Israeli Consulate in Shanghai organized the cargo flights, which include other donations of equipment from Chinese people who want to help Israel.

Volunteers visit homes in haredi communities in Israel: ZAKA Search and Rescue volunteers visited the homes of over 60 confirmed coronavirus cases among haredi communities in Israel over Shabbat in order to ensure they immediately self-isolate, ZAKA said in a statement. The visits were organized after the sick person did not answer the phone call from the Israeli Ministry of Health to confirm that they have the virus, since haredi households do not answer the phone on Shabbat, even though community rabbis ruled that phones should be answered during the pandemic. ZAKA volunteers visited homes in Ashdod, Jerusalem, Petach Tikva, Elad, Rosh Haayin, Bnei Brak, Emmanuel, Ariel, Givat Shmuel, Beit Shemesh and Moshav Sapir.

El Al brings back stranded Israelis and needed medical equipment: El Al has not taken a break since suspending is regular passenger flights. This morrning it completed its longest-ever non-stop flight – 17 hours and 15 minutes, to bring home 280 Israelis stranded in Australia and New Zealand due to the current pandemic, Globes reported. The crew included 8 pilots, who did not leave the plane in Australia. Globes also reported that El Al will carry out 20 cargo flights from China to Israel over the next two weeks to bring urgent medical equipment back to Israel in passenger planes converted to cargo aircraft, including one flight that took off this morning.

We remember: A British authority on kosher laws, a Danish Jew who never failed to visit others in the hospital and a Holocaust survivor with a remarkable story are the latest coronavirus victims memorialized in our Bonds of Life project. Click here to share information about your loved one.

Coronavirus closes Canada’s Jewish newspaper: “Unfortunately, we too have become a victim of Covid-19,” the president of Canadian Jewish News said in a statement. “Already struggling, we are not able to sustain the enterprise in an environment of almost complete economic shutdown.”

Steep toll for Swedish Jews: Nine Jews have so far died in Sweden, making them overrepresented among coronavirus casualties there. All were over 80 and most were Holocaust survivors.

Family of New Jersey man lobbying for experimental drug: The family of Michael Goldsmith, a 34-year-old Jewish father of two currently on a ventilator and in an induced coma because of the coronavirus, wants him to be given a drug that is being tested for coronavirus patients. But the drug company is not allowing him into clinical trials, according to an extensive article in Business Insider. For now, according to the article, the family is relying on prayer to get them through this time.

My beloved mother passed away this morning as a result of complications from the coronavirus. This is a heartbreaking moment for me, my wife, and our entire family. 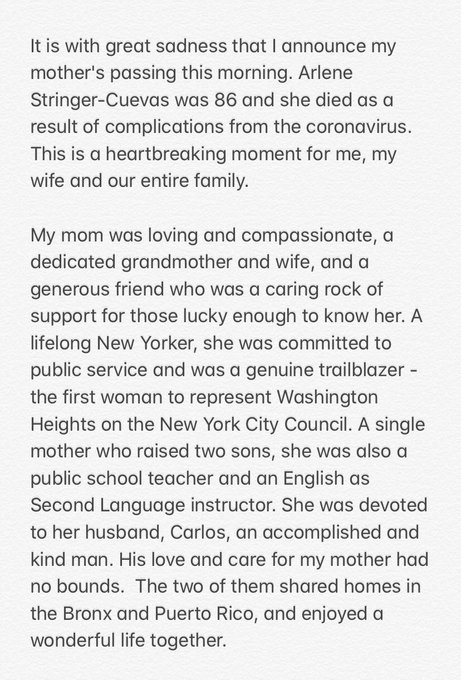 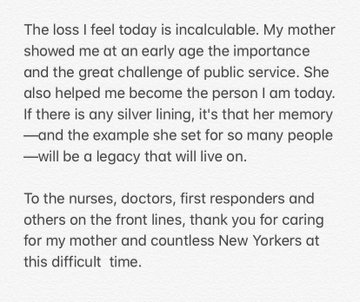 New York City nursing home asks for supplies: The New Jewish Home, a nursing home on Manhattan’s Upper West Side, is asking the public for supplies and drawing criticism from patients for its coronavirus response, according to a report in The City. “It’s really bad there,” the wife of one temporary resident told the news organization.

One likely driver, Ben Sales reports for JTA, were the Purim celebrations that are common in those neighborhoods. “I must have been with, I don’t know, 1,000 different people that night,” said a musician who was recently hospitalized with the coronavirus.

You can see the full feature here and submit information about anyone you’ve lost here.