Yavneh, a Modern Orthodox coed school of slightly more than 100 students, won the Texas Association of Private and Parochial Schools’ 3A title with a 50-35 victory over Tomball Rosehill.

It was the 18th consecutive victory for the Bulldogs, who finished their season with a record of 31-3, according to the Dallas News. The team was making its fourth straight appearance in the Final Four of the association’s 3A grouping, for schools with 100 to 140 students. Yavneh lost in the title game in 2017.

Yavneh is one of only three Jewish schools among the some 200 mostly Christian schools in TAPPS, rejoining the association after it changed its rules to accommodate the religious observances of all its members.

“These kids worked so hard all season long. I am so very, very proud of them,” coach David Zimmerman told the Dallas News. “We are the first Jewish school to win a state championship in basketball. It is amazing.”

In October 2012, TAPPS changed its rules months after it was criticized for initially refusing to reschedule a Friday night state tournament game involving the Robert M. Beren Academy of Houston, an Orthodox Jewish day school.

TAPPS, the main association in Texas for private and parochial schools, changed the time of its games only after several Beren players and their parents filed a lawsuit. Beren won the rescheduled semifinal before losing in the championship game.

Yavneh Academy of Dallas is your #TAPPSbasketball 3A Boys State Champion! 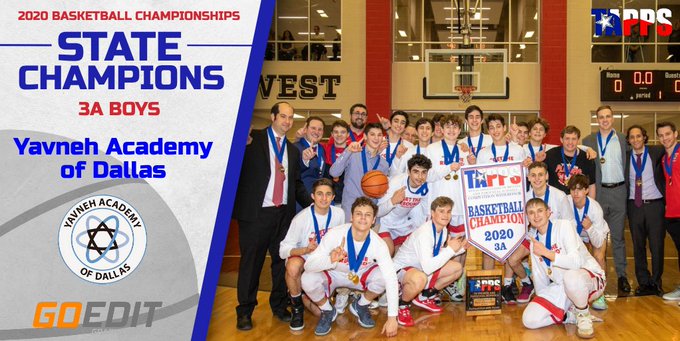