At a nondescript community center in the city of Wiesbaden on Sunday, dozens of Jews got together to officially form the Jewish faction of the rising right-wing political party in Germany: Alternative for Deutschland (AfD). Judging from the amount of cameras and reporters present — from Deutsche Welle to The New York Times magazine — it would seem that this was the most important Jewish event in Germany since the opening of Berlin’s Holocaust Memorial to the Murdered Jews of Europe.

The press conference felt more like a trial: This could be the AfD’s moment of redemption, a chance to prove that it’s not the party of antisemites or neo-Nazis that the mainstream media (and the official German Jewish establishment) claims it is. For Jews, it was an ultimate act of defiance — not against the ruling German coalition, but against their co-religionists.

Since its founding in 2013 as a Euro-skeptic party, the AfD has been sidelined by the official German Jewish community. As the media got wind of the group’s formation, 17 Jewish organizations united together with a gusto unseen over other issues of Jewish concern, such as Germany’s support of the 2015 Iran nuclear deal; Germany’s funding of anti-Israel NGOs; and, more locally, allegedly anti-Israel content at the Berlin’s pubic Jewish Museum. Led by the Zentralat der Juden (Central Council of Jews), organizations like the Abraham Geiger College and the American Jewish Committee Berlin signed a joint statement categorically calling AFD “antisemitic,” “anti-democratic” and “no party for Jews.”

Ten members of “Jews in the AfD” (JAfD) sat on stage, with men donning kipahs they don’t normally wear, to answer media questions and defend their decision with equal gusto. The founders didn’t expect this much attention, but they expected opposition, even to the extent of being barred from their original Frankfurt location due to pressure — a German boycott of Jews the Zentralat didn’t mind. The Zentralat also sponsored chartered busses for a demonstration of Jewish university students held in Frankfurt at the time of the caucus. There, signs came out against certifying the AfD as “kosher.”

To some, the new location for the caucus turned out to be symbolic. When a speaker recounted German cities where Muslim migrants attacked young girls, one Jewish member, Micha, shouted: “And right here!”

Just a few hundred meters away, the murdered, violated body of Jewish schoolgirl, Susanna Feldman, was found near train tracks. Micha, a family friend who recalls a young Susanna playing on his lap, switched from the Linke (“Left”) Party to the AfD after her murder by an Iraqi asylum-seeker who stayed in the country illegally.

“It finished me,” he said. At his request, the musical interlude of “Kol Nidrei” was played in Feldman’s memory.

JAfD members support the party as the only one speaking out against massive Muslim migration that they link to a rise in antisemitism and terror, viewing themselves as part of a growing, conservative European movement battling a left-wing trend towards open borders, globalization and what they view as the breakdown of Judeo-Christian values caused by mass Muslim migration.

“I used to be a member of the SPD (Social Democratic Party), but I got more conservative as I got older and joined the CDU,” he said at the press conference. “I didn’t leave the CDU. The CDU left me. Under Merkel, the CDU has shifted to the left.”

He declined to respond to his Jewish foes, except to accuse the Zentralat of becoming an arm of the Merkel government in the spirit of “don’t bite the hand that feeds you.”

Unlike in the United States, Germany does not separate religion and state. German Jews (and other religious members) can opt to register and be taxed as members of their religious community. The Zentralat today receives government funding to the tune of 13 million euros a year (nearly $15 million). Of the 200,000 Jews estimated to be living in Germany, the majority hail from the former Soviet Union, who were welcomed to Germany after the fall of the Iron Curtain.

Russian-speaking Jews form half of the founding members of “Jews in the AfD.”

The idea for the faction began with Fuhl’s internal, informal talks with fellow AfD members. A WhatsApp group soon formed for the like-minded, “rebellious” Jews to dish on “Fake (German) News,” the perceived weakness of the German Jewish community, and bona-fide “neo-Nazis.”

A representative from the office of Bundestag member and party leader Beatrix Von Storch eventually joined the chat. The Jews in the AfD happily got what the Jewish community made taboo: direct lines of communication with Germany’s most controversial political party.

‘I know that Jews are patriots’

At the event, AfD politicians across the political hierarchy seemed to compete over who could give the more pro-Jewish, pro-Israel speech.

“I was really shocked to see what was written about your meeting. Just shocked,” said Erika Steinbach, a former CDU leader and now chair of the AfD-affiliated Desiderius Erasmus Foundation. “I could never imagine that in a democracy, a decision freely made by people, by Jews, irrespective of their party, would be treated in such a terrible way.”

She, along with other party members, cited causes for concern for Jews in Germany: attacks against Jews for wearing kipahs and reported taunting of Jewish schoolchildren.

“I know that Jews are patriots,” she said, adding that she would never join an anti-Semitic party. A common refrain at the caucus was: “Judaism belongs to Germany,” unlike Islam. 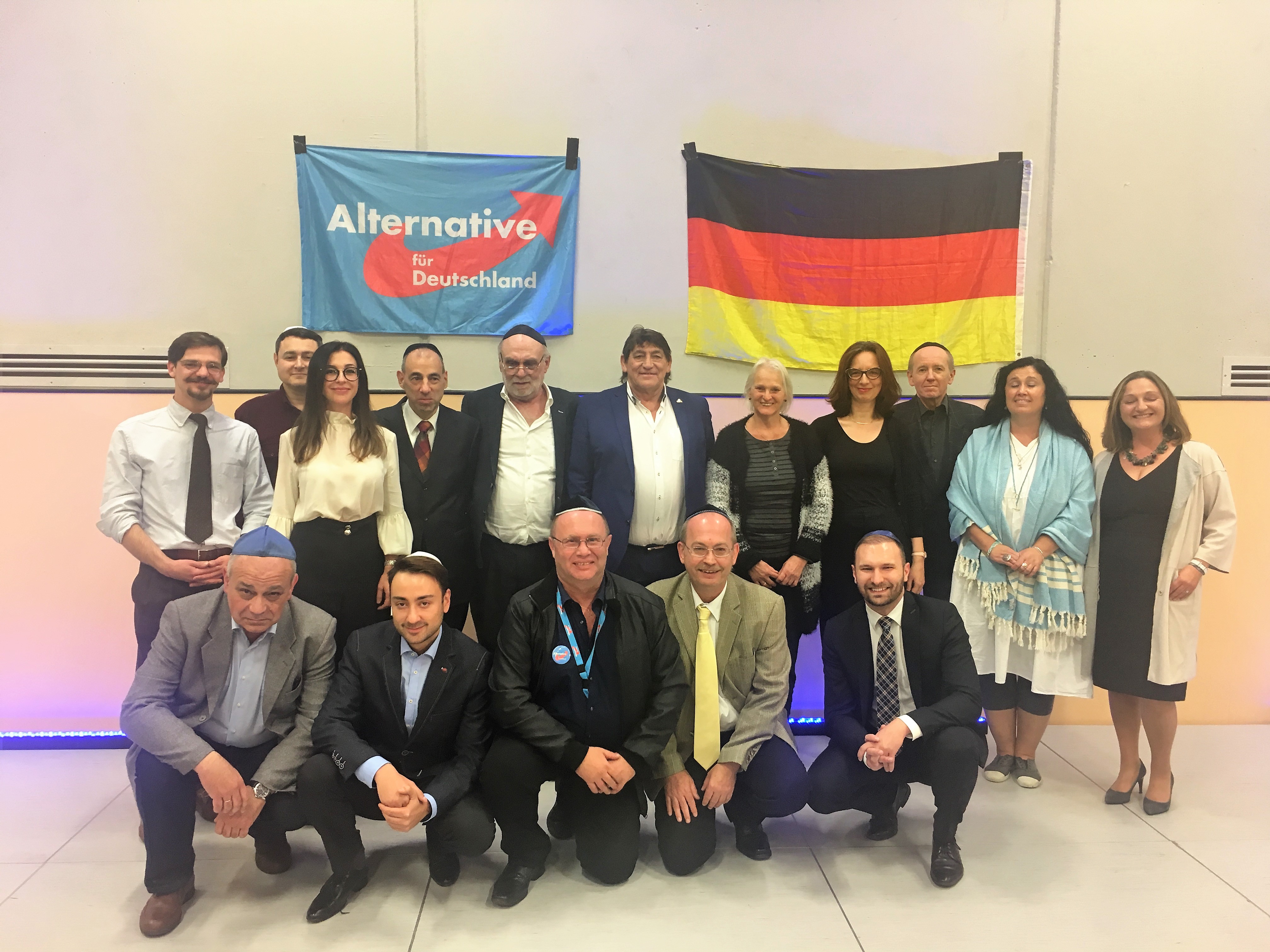 Members of the Jewish faction to Germany’s AfD pose in front a party flag and the German flag. Credit: Orit Arfa.

The Netanyahu government, including the Israeli Ambassador to Germany, Jeremy Issacharoff, however, has maintained distance from the AfD.

Likud Party Knesset member Yehuda Glick, who has also been lobbying to forge diplomatic contacts with the right-wing Freedom Party in Austria, arguing that they have eschewed any Nazi roots, is one of the few Israeli politicians openly calling for dialogue with the AfD.

“AfD members have come out with very strong statements in support of Israel and the Jewish people, and, with polls showing it is now ranked as the second-largest party in Germany, it would be extremely unwise to dogmatically shun dialogue with them,” he said.

Addressing Israeli policy, Bundestag member Petr Bystron hailed the “historic day” and castigated the German government’s increase of funding to UNWRA, as well as its criticism of U.S. President Donald Trump’s recognition of Jerusalem as the capital of Israel. “I can pledge in my name and in the name of the members of the Bundestag that we’re the only party that wants this European support of Palestinian terrorism to come to an end,” he said.

‘That doesn’t automatically make it an anti-Semitic party’

Jews in the AfD hope to engage the party about incidents, policies and statements that have been cited as proof of antisemitism endemic to the party. For instance, the AfD platform forbids kosher ritual animal slaughter, which subsumes the Jewish shechitah — a target of the Muslim population.

“It’s a problem, but that doesn’t automatically make it an antisemitic party,” said Fuhl. “There is disagreement about it within the party, and we’ll address it.”

Other oft-cited problematic AfD statements include AfD chair Alexander Gauland calling the Holocaust a “bird speck in glorious German history,” and regional parliament member Björn Höcke saying the grand Berlin Holocaust memorial a “monument of shame.” JAfD doesn’t necessarily see these comments as trivializing the Shoah, believing such words have been interpreted out of context or overplayed by the media.

“I prefer to be part of a party that wants to help living Jews, not dead Jews,” Fuhl said to applause.

Perhaps as an unintended consequence, the event has snaked out alleged anti-Semites. In condemning the founding of JAfD, regional AfD parliament member Wolfgang Gedeon who has been accused of trafficking in Jewish conspiracy theories, wrote on Facebook: “The AfD has adopted a positive attitude towards the real, Christian identity of the European continent for good reason. In the best case, this group [the JAfD] is completely unnecessary; in the worst case, it is a Zionist lobby organization which runs against the interests of Germany and the Germans.”