(JTA) — With a big smile on his face, presidential candidate Sen. Bernie Sanders appeared alongside the man who plays him on “Saturday Night Live,” the comedian Larry David, on NBC’s “Today” show Friday morning.

Both Sanders and David were interviewed, and in an introductory clip, Al Roker jokingly mixes them up.

What are the odds! Both @BernieSanders and Larry David are with us on the same morning. 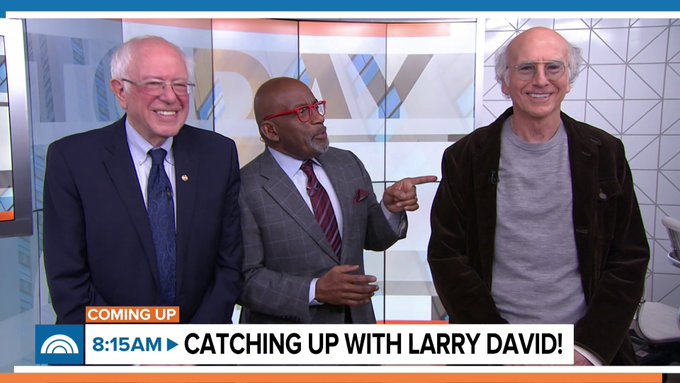 If Sanders is elected, David complains, “It’ll be great for the country, terrible for me.”

Why? He would have to fly back and forth from L.A. to keep appearing on “SNL” as Sanders, something he has done since the 2016 campaign.

In response, Sanders jokes, “I’m getting you a good job for four years and you’re complaining!”

“They’re not related at all,” Roker then quips. He’s likely joking about the fact that the two are distantly related, as was revealed on an episode of “Finding Your Roots” in 2017.

Later on the show, David joined Roker to do the weather forecast, and David used the time to just mercilessly tease Roker about his glasses and his job.

It’s worth noting that David, whose HBO series “Curb Your Enthusiasm” returns for 10th season on Jan. 19, recently got a dog and named it Bernie.