JERUSALEM — One man has died and over 58 people have been injured, since rocket from Gaza began raining down on Israel around 10 a.m. on Saturday.

Around 2:30 a.m. on Sunday, a rocket hit a building in Ashkelon, critically injuring a 60 year-old man. The man died on his way to the hospital, marking the first death since the fighting began on Saturday.

At least 300 rockets were fired at Israel from Gaza on Saturday, directly hitting two houses and seriously injuring an 80-year-old woman.

The Israel Defense Forces responded on Saturday evening by bombing 120 Gaza military targets, including a six-story building in a residential area of the northern Gaza Strip, where Hamas offices are located.

The IDF said it also destroyed from the air an Islamic Jihad terror tunnel that stretched from southern Gaza into Israel and had been under surveillance for some time.

The Gaza Health Ministry, which is run by Hamas, said that a pregnant Palestinian woman and her 14-month-old baby were killed in the Israeli air strikes.

The IDF struck several Hamas military compounds used for training and for the manufacture of weapons, as well as a compound used by the Hamas Navy and another belonging to the Popular Front for the Liberation of Palestine.

The rocket barrage began at about 10 a.m., damaging homes and apartment buildings, reportedly also hitting an empty high school building. The Iron Dome missile defense system intercepted dozens of the rockets, according to the IDF. 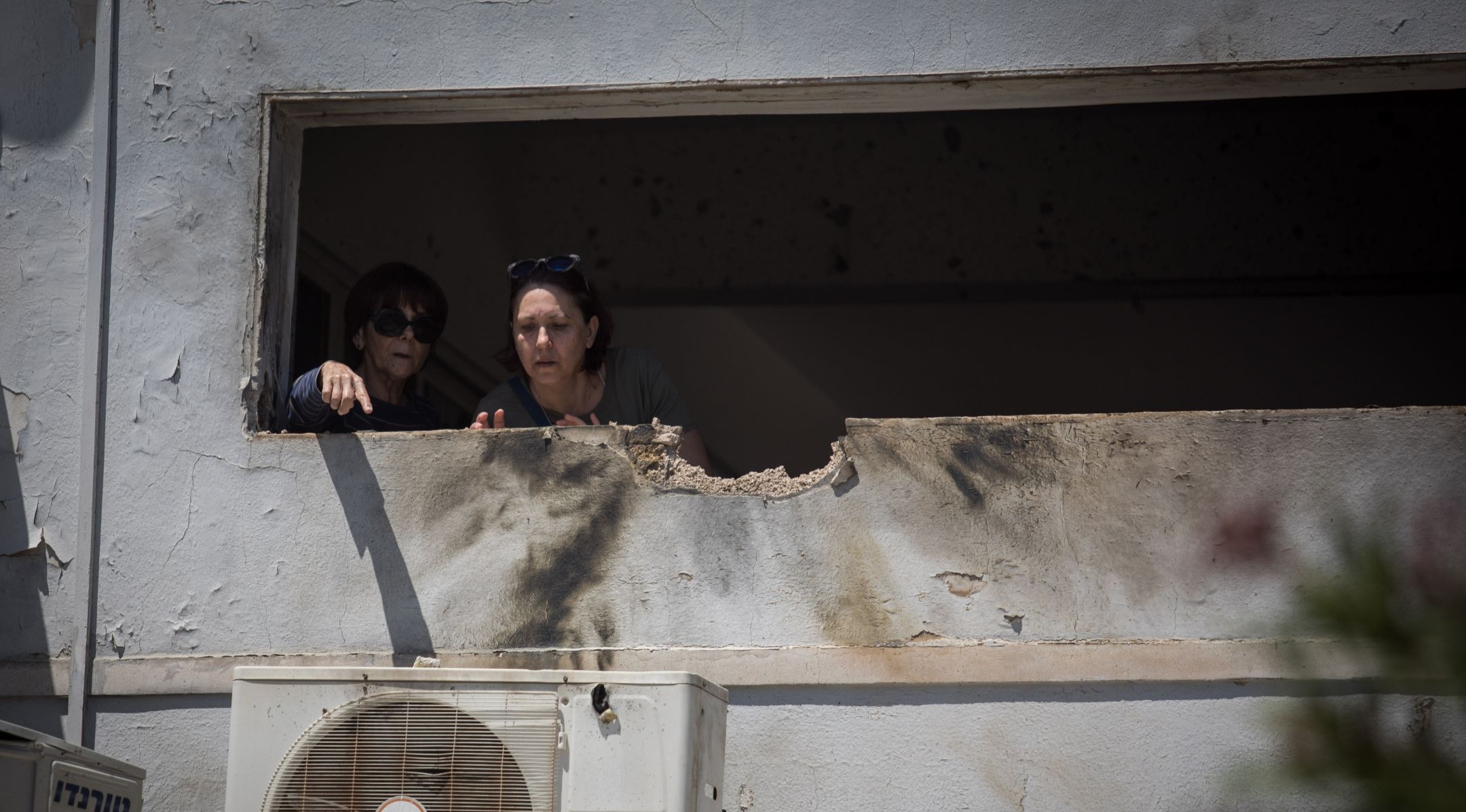 Residents of southern Israel survey the damage to their home by a rocket fired from Gaza on May 4, 2019. (Hadas Parush/Flash90)

The IDF on Saturday night announced that schools in the cities and towns near the Gaza Strip would be cancelled for Sunday, and only workplaces with access to a bomb shelter would be permitted to open. The southern Israeli city of Ashkelon also cancelled school for Sunday after several of the rockets fired from Gaza struck areas of the city.

An event scheduled for Saturday night to celebrate the start of the Eurovision song contest in the central Israeli city of Modiin was cancelled due to the rocket attacks.

Delegations from several of the countries participating in Eurovision began arriving in Israel on Saturday. The Eurovision semi-finals are scheduled for May 14 and 16, and the finals on May 18 in Tel Aviv.

In a statement released later on Saturday, as the IDF began its retaliatory strikes on Gaza, the Palestinian Islamic Jihad terror group in Gaza released a statement saying that it would work to disrupt Eurovision.

“We will prevent the enemy from succeeding in establishing any festival aimed at harming the Palestinian narrative,” read the statement from the terror group.

The IDF spokesman’s office said that Iron Dome batteries were in place to protect Tel Aviv and its environs from Gaza rockets.  Rockets were fired on Tel Aviv by Islamic Jihad in March.  One on March 14 in Tel Aviv caused no damage or injuries. Another on March 25 on the central Israeli community of Mishmeret scored a direct hit on a house and injured seven people.

On Wednesday, the Lebanese Al Akhbar newspaper reported, citing unnamed sources, that Palestinian terror groups in Gaza have warned that if Israel does not ease restrictions on Gaza — part of an unofficial cease-fire agreement brokered by Egypt, Qatar and the United Nations — that “the area adjacent to the Gaza Strip will experience further arson, and in the near future the pressure from the Gaza Strip will increase so much so as to ruin the Eurovision Song Contest,” The Times of Israel reported.

The United Nations said it was working with Egypt to broker a stop to the rocket attacks and retaliatory strikes.

“The United Nations is working with Egypt and all sides to calm the situation in Gaza. I call on all parties to immediately de-escalate and return to the understandings of the past few months. Those who seek to destroy them will bear responsibility for a conflict that will have grave consequences for all,” Nikolay Mladenov, The United Nations envoy for Middle East peace, said in a statement.

“Continuing down the current path of escalation will quickly undo what has been achieved and destroy the chances for long term solutions to the crisis. This endless cycle of violence must end, and efforts must accelerate to realize a political solution to the crisis in Gaza,” he also wrote.

The European Union also released a statement calling for an end to the rocket attacks from Gaza and for a political solution to the Israeli-Palestinian conflict.

Israeli Prime Minister Benjamin Netanyahu, who also serves as Defense Minister, met with security officials on Saturday afternoon. The Security Cabinet will meet on Sunday to discuss the latest escalation.

The escalation from Gaza comes at the start of several weeks of extra activity and tension due to Israel’s Memorial Day and Independence Day, Eurovision, the first anniversary of the opening of the U.S. Embassy in Tel Aviv and the Muslim holy month of Ramadan. 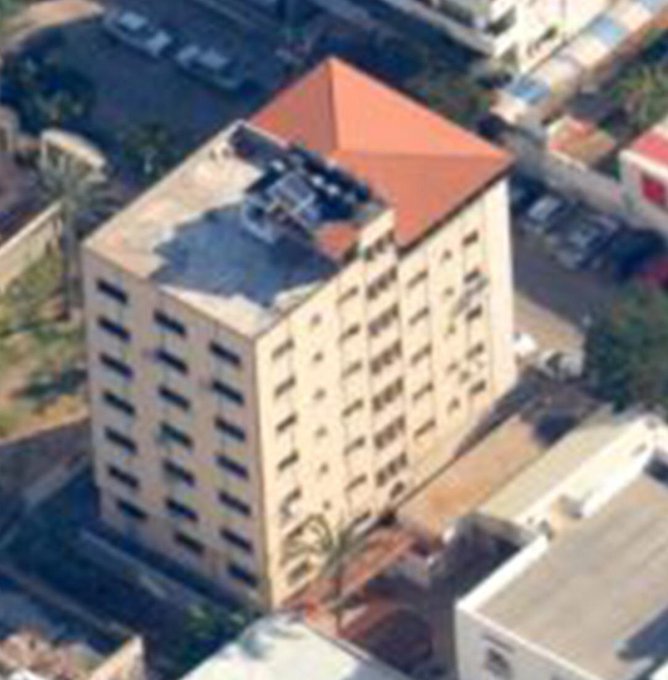 We have just targeted Hamas’ Military Intelligence and General Security Offices located in a building in Gaza.

Hamas used this building to hide terror infrastructure while abusing its location in the heart of a residential neighborhood. 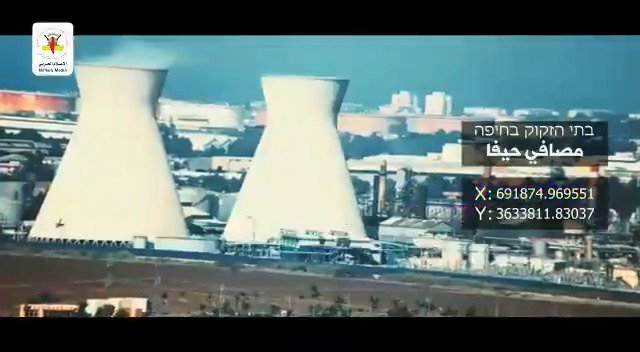