On Thursday, January 5, students of the sophomore engineering class at the Hebrew Academy of Nassau County, along with their instructor, Mrs. Victoria Pero, took a trip to Queens College to attend the 20th annual science open house for high-school students presented by Stony Brook University. At the seminar, the students had the opportunity to experience different events related to biology and chemistry.

The engineering class began with a lecture on non-Newtonian fluids and hands-on experience with the substance that is still being researched.

The class continued their day by visiting the Holtzman Lab and viewing the topic researched there, the development of zebra fish embryo. Silly putty (hydrophobic materials in nature) and fake milkshakes (polyurethane foam) were created by the students in two other lessons that followed.

The students then had a relaxing lunch break before continuing their informative day. They finished off by watching the Hayden Memorial Chemistry Show, a show that demonstrated a variety of chemical reactions such as explosions and color transformations that received a great response from the crowd. Afterwards, the students headed back to school, excited to share their newfound knowledge with their peers.

Schoolwide Spelling Bee. HANC held its schoolwide spelling bee on January 4. Each class could have two class finalists. They were Avi Brandler, Jaden Etienne, Jessica Haynes, Grace Herschberg, Jesse Kramer, Rena Max, Liana Schwartz, Mor Sharoni, and Moshe Wieder. They all spelled so many words correctly. They continued on, round after round, until they were finally down to two.

Congratulations to HANC MS champion, Rena Max, and runner-up Avi Brandler. Rena will represent HANC at the Long Island Spelling Bee Companionship at Hofstra in February. HANC is so proud of all the spellers. What a great job they did!

Middle School Shabbat in West Hempstead. Shabbat Parashat Vayigash was Middle School Shabbat in West Hempstead. Rabbi Harris, Rabbi Olshan, Morah Klein, Morah Hakimian, and Rabbi Hecht came with their families for Shabbat. Each of the rabbis spoke at Anshei Shalom, Eitz Chayim of Dogwood Park, and the Young Israel of West Hempstead over the course of Shabbat. Friday night there was an amazing father—son oneg at the HANC 609 elementary school with Rabbi Harris, Rabbi Olshan, and Rabbi Hecht. There was delicious food, catered by I and D, and beautiful zemirot. Rabbi Harris led an interactive shiur which discussed mitzvot and whether there were bigger or smaller mitzvot. Students and parents alike were enthralled. The evening ended with the entire room forming one big circle and singing “Acheinu.”

Shabbat afternoon, there was a mother—daughter shalosh seudot. There was a lavish buffet, catered by Bagel Town. The mothers and daughters sang zemirot together with Morah Hakimian, Morah Klein, and Mrs. Fryman. The morot then led them in an interesting game which tested the mothers’ and daughters’ knowledge of each other’s likes and dislikes. Everyone also learned about the parashah together with a beautiful source booklet put together by Morah Hakimian and Morah Klein. This Shabbat was a wonderful opportunity for the rebbeim and morot to spend time with the West Hempstead community. HANC Middle School would like to thank all of the hosts and sponsors of the Shabbat. We would also like to thank Rabbi Goller, Rabbi Greer, Rabbi Soniker, and the shuls for welcoming us so warmly.

‘Hashket Vavetach’ Tefillah Initiative. Rabbi Yehuda Kelemer, rav of the Young Israel of West Hempstead, was hit by a car about a month ago. As a z’chut (merit) for a refuah sheleimah, the HANC Middle School has undertaken a new program called the Hashket Vavetach tefillah initiative. Rabbi Kelemer has often mentioned his desire for quiet during tefillah. The students have been working diligently on their avodat Hashem. This initiative has helped the entire minyan concentrate better on their tefillot. Additionally, each Tuesday and Wednesday, they spend a few minutes at the end of davening focusing on a piece of tefillah so that the students can also understand what they are saying even better. May this initiative be a z’chut for a refuah sheleimah for Yehuda ben Rivka Leah b’toch sha’ar cholei Yisrael. IDF: One Rocket Launched From Gaza Into Israel Intercepted By Iron Dome 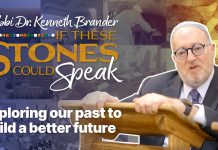 IDF: One Rocket Launched From Gaza Into Israel Intercepted By Iron Dome

Torah February 1, 2023
0
Does the blueprint from our future lie in secrets from Israel’s past? Viewers are invited to join Ohr Torah Stone President and Rosh HaYeshiva Rabbi...

IDF: One Rocket Launched From Gaza Into Israel Intercepted By Iron...