With a ratio of more than one law enforcement officer to one counter-protester, the May 25 rally of nine members of the KKK-affiliated Honorable Sacred Knights of Indiana (HSK) came and went at Dayton, Ohio’s Courthouse Square without arrests, violent incidents, citations issued, or use of force by police.

Between 500 and 600 counter-protesters — with 720 police officers in their midst — over-shouted members of the Madison, Ind.-based Klan at HSK’s 1 to 3 p.m. rally on Saturday. The nine HSK members were behind a fenced off area at the square, under the shadow of the 11-foot bronze statue of Abraham Lincoln. Officers were brought in from other cities across Ohio to assist the effort.

Chain link fences also divided those who came to protest HSK from HSK supporters, who were placed several city blocks from each other. Some counter-protesters brought assault rifles to the event. At the rally were members of the New Black Panther Party, ANTIFA protesters, church groups, LGBTQ supporters, and people of all ages and backgrounds.

City government began mobilizing to prevent another Charlottesville when HSK first secured its rally permit at the end of January.

“This was a multi-department team assembled to ensure residents and businesses would remain safe,” Dayton City Manager Shelley Dickstein said at a city press conference hours after the May 25 rally.

She estimated the cost to the city for security was about $650,000.

“The Supreme Court has mandated that speech may not be financially burdened (just) because it offends many,” Dickstein said.

Dayton Police Chief Richard Biehl said at the press conference that the day’s events clearly presented a safety challenge to the city of Dayton and its residents.

Dayton Mayor Nan Whaley said at the press conference that the local situation is part of a larger national conversation, particularly because of social media, the ability to organize through it, and the legal right to carry assault rifles in Ohio.“We knew there was a need to provide a perimeter around that area (Courthouse Square) based on some very concerning intelligence gathered over time that suggest the potential for elevated threat, clearly of significant weapon possession and display,” Biehl said, “and also individuals who were expressing some interest in engaging in violence related to this event directed at police and/or those in attendance.”

“When you have a law in this state that people can carry assault rifles willy nilly, that’s a danger,” Whaley said. “And we have to be serious about that. We’ve said the whole time our priority was safety of our community.”

Biehl added that the consent decree the Klan entered into with the city of Dayton May 13 provided his department with tactical advantages. Klan members agreed to only carry side arms and were escorted in and out of Dayton by police, which Biehl described as “expedited entrance and exit.”

Had the Klan failed to comply with any element of the consent decree, Biehl said, the rally would have been shut down, and HSK would have been responsible for any costs related to the rally.

“Was I certain that it would end in the manner that it did, with really no events to speak of? No, I wasn’t certain of that,” Biehl said. “Did I have concerns? Sure, I had concerns. But I also know we were extremely well-planned.”

Businesses in the downtown area displayed anti-hate messages on signboards in advance of the rally, as did RTA busses. 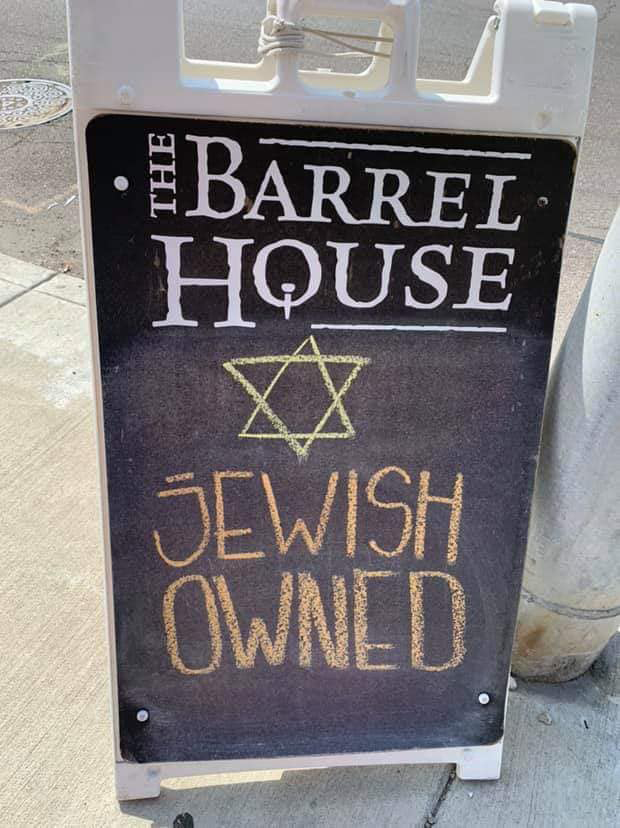 The signboard in front of The Barrel House, a few blocks from the Klan rally in Dayton, May 25, 2019. Credit: Sara Stathes.

Sara and Gus Stathes, owners of The Barrel House, put the message “Jewish Owned” on the signboard in front of their bar, a few blocks east of the counterprotest area on Third Street.

Sara Stathes said it was her husband’s idea.

“He’s not Jewish but he’s supportive,” she said in an interview with The Observer. “We wanted to make the point that we’re not going to be intimidated out of running our business and living our lives in our city.”

When she opened the business the morning of the rally, she said friends started flooding in, either for a beer to calm their nerves or for a hug to say “I love you.”

Stathes said she went from friends’ hugs to seeing two people dressed in Nazi uniforms pass by on bicycles.

“I have never in my life felt the way that I felt today, and never thought I would have to,” she posted on her Facebook page. 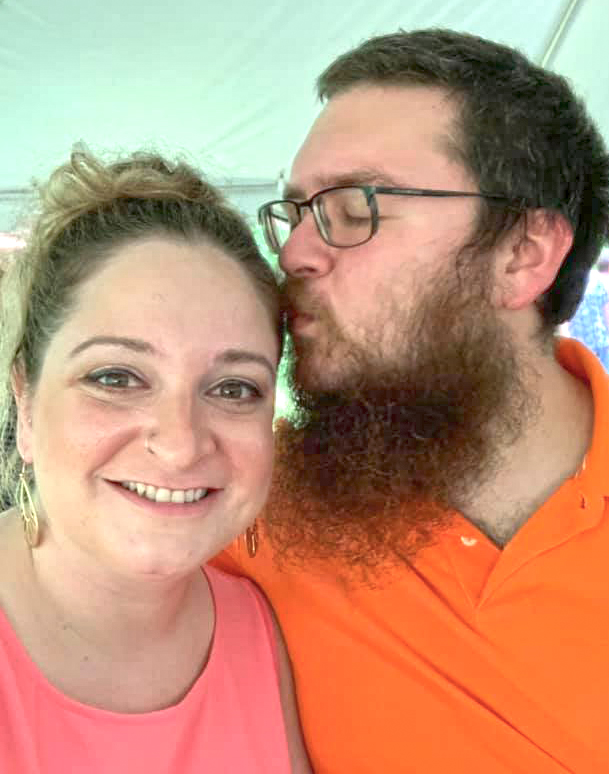 Sara and Gus Stathes, owners of The Barrel House.

When Stathes learned of the rally, she decided to hold a fundraiser; The Barrel House donated a dollar per pint sold on May 25 to the National Conference for Community and Justice of Greater Dayton. After she posted the fundraiser on Facebook, two local businesses each matched the dollar per pint.

“People came out strong to support that,” Stathes said.

That afternoon, someone posted a series of photos on her Facebook site showing people in the counter-protest area first attempting to burn an Israeli flag, then tearing it and stomping on it. 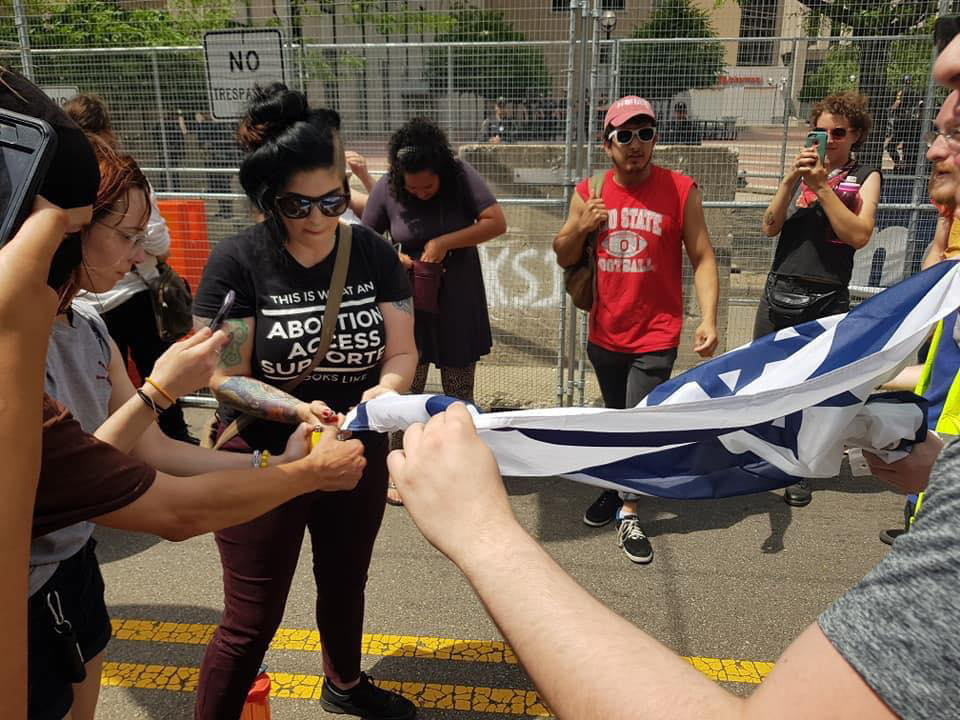 Counterprotesters attempt to set an Israeli flag on fire near the Klan rally at Dayton’s Courthouse Square, May 25, 2019. Credit: Corine Fairbanks. 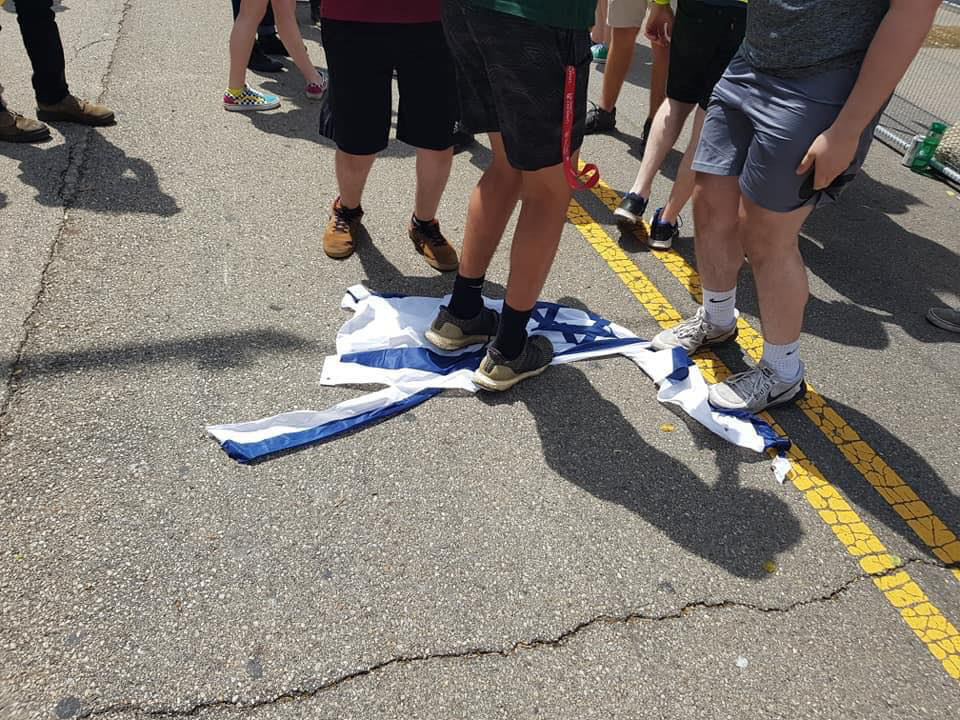 After failing to ignite an Israeli flag, tearing it instead, counter-protesters step on it near the Klan rally at Dayton’s Courthouse Square, May 25, 2019. Credit: Corine Fairbanks.

“I was shocked to see that,” Stathes said. “I saw some counterarguments (in the comments) as to why they might have done that, but at the same time it’s totally unacceptable. It made me feel sick.”

According to Stephanie Hausner, deputy director of the Israel Action Network of Jewish Federations of North America, Students for Justice in Palestine equates Zionists and the KKK as fascists.

Native American rights activist Corine Fairbanks of Dayton took the series of photos, which have been widely circulated on social media. Fairbanks posted them at her Facebook page just before the end of the rally and counter-rally, with the heading: “More Allies, and Palestinian Relatives, wanting to burn flag – FREE PALESTINE!! Deport the KKK.”

Jen Mendoza, with the Cincinnati Palestine Solidarity Coalition, is a friend of Fairbanks. Mendoza is shown in the images wearing sunglasses and attempting to set the Israeli flag on fire with a cigarette lighter.

In an interview with The Observer, Mendoza said the incident occurred after she saw three young men with an Israeli flag and entered into what she described as a confusing discussion with them.

“And so recognizing the state of Israel as being of the same ideology (as) American capitalist imperialist settler colonialism, and seeing that flag on our side (counter-protesters area) was jolting,” Mendoza said of her reaction at the sight of the Israeli flag.

“One of them said that he was from Israel. And then the other two boys looked Arab,” she added. “The other kid, he was the one doing a lot of the talking, he made comments about God giving them the land, and at that point I was like, ‘Well, you’re on the wrong side of this fence if that’s what you believe.’”

Mendoza said that after the conversation went on and he said “some extremely Zionist, racist things,” he asked her if he should throw it on the ground and stomp on it.

She told him she’d be happy to burn it for him.

“And then he flipped and was like, ‘Yeah, let’s burn this flag right now,’” Mendoza added, “and he helped tear it apart — and then he told us that he was doing a social experiment to find out where people really stood on fascism. And then he began chanting ‘Free Palestine.’”

Fairbanks said that a young woman in the crowd started yelling at those destroying the flag, saying, “What are you? Against Jews?”

“And I remember them (the young men) saying that no, they weren’t against Jews, they wanted Palestine to be free,” Fairbanks said.

Fairbanks said she responded along with others that “No one’s against anyone except for colonial imperialism.”

Fairbanks added that the flag of the state of Israel “has nothing to do with Judaism.”

At the same time as the downtown rally and counter-rally, the NAACP hosted An Afternoon of Love, Unity, Peace and Diversity at McIntosh Park, a mile west, across the Great Miami River. The city and law enforcement urged people to stay safely away from downtown. About 200 people showed up for the block party-style alternative. The Jewish Federation of Greater Dayton was among the numerous coalition partners for the NAACP event.

On Sunday afternoon, May 26, the NAACP led a ritual with local clergy to cleanse hate from Courthouse Square, which it performed 25 years ago at the same site, the last time a Klan rallied in Dayton. 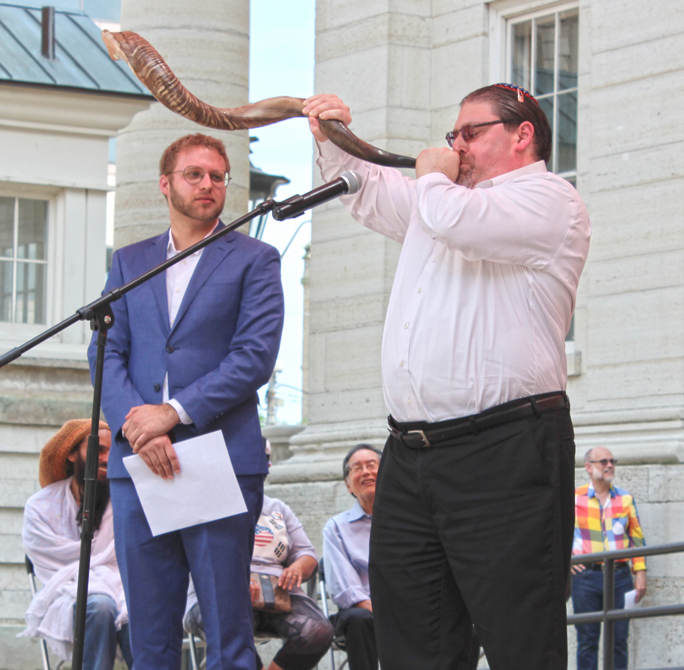 At Dayton’s Courthouse Square the day after the Klan rally, Beth Abraham Synagogue’s Rabbi Josh Ginsberg sounds the shofar ‘to wake us from our moral slumber’ as Temple Beth Or’s Rabbi Ari Ballaban, director of Dayton’s Jewish Community Relations Council, looks on. The two participate in NAACP’s ritual cleansing of the square, May 26, 2019. Credit: Marshall Weiss.