(JTA) — Over 90,000 mostly Orthodox Jews gathered under heavy security at MetLife Stadium in New Jersey to celebrate Siyum HaShas, the completion of the study of the entire Talmud.

The 7.5-year cycle is known as Daf Yomi, since participants study one full page of the 2,711-page text each day. The event on Sunday, organized by Agudath Israel of America, was the 13th completion of the cycle.

Several thousand people also gathered in Barclay’s Center in New York to watch the program via live video hookup, and people around the world watched it online.

From the very first words of Mincha at the 1 p.m. start time until the very last amein at the end of Maariv, the program touched hearts and spanned the generations. A special siyum on mishnayos was a tribute to the children of Masmidei HaSiyum, encouraging them to carry the torch of Torah into the future. Holocaust survivors in attendance were lauded and demonstrated that limud Torah is a bridge that links our past, our present and our future.

The siyum theme of ki heim chayeinu (for the words of Torah are our life) was expressed  in several videos highlighting the importance of kvias itim l’Torah (obligation to set aside time daily to learn Torah). A tribute to ArtScroll founder Rabbi Meir Zlotowitz urged participants to utilize their own talents to change the world.

A World War II era gemara was presented to Rav Shmuel Kamenetsky, Rosh HaYeshiva of Talmudical Yeshiva of Philadelphia and Chaver Moetzes Gedolei Hatorah The historic volume was used to make the poignant siyum marking the conclusion of the final masechta of Shas.

New Jersey Gov. Phil Murphy attended the MetLife event, later tweeting: “As we celebrated #SiyumHaShas at @MetLifeStadium today, we held the victims of the horrific antisemitic attacks in Jersey City and Monsey in our hearts. We will drive out darkness with light by always standing with our Jewish community. Anti-Semitism and hate have no home here.”

More than 50 law enforcement agencies and over 300 uniformed state police were in the stadium, according to CBS New York.

The first Siyum Hashas took place on Feb. 2, 1931 in several cities in Europe and in Jerusalem, as well as in Baltimore and Philadelphia. 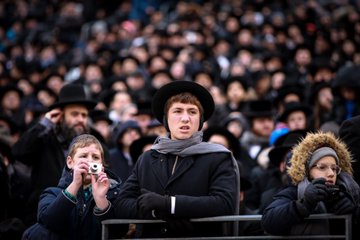 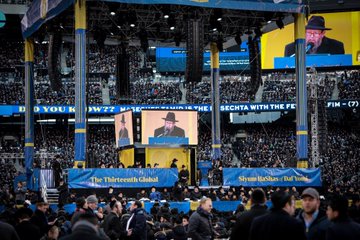