Unlike any previous tragedy, where we listen to the horror stories, process our emotions and then return to ordinary life, this time is different. As the tragic shooting took place in a synagogue, the reverberations of trauma may have a direct impact on our own lives. Most certainly, we will all be thinking of it this Shabbat.

Looking to protect us, the psyche constantly searches for threats and creates anxieties that will cause us to avoid potentially dangerous situations. In this case, the association with danger has become the shul. A place we once gathered for solace, prayer, peace, love, unity, kindness, study and inspiration has been transformed into one of anxiety, fear and horror.

Does that mean we avoid shul? Certainly not. However, the task of returning can be more difficult for some than others, based upon how the brain processes stress, as well as previous exposures to traumatic incidents.

Below are seven suggestions for how to help our children cope.

Having spent several days this week in Pittsburgh to assist with the crisis-relief and trauma-intervention work on behalf of Yeshiva University and Chai Lifeline, I have a firsthand perspective. What I observed is that there is a significant divide between what is happening on the ground and what is being portrayed in the news. For instance, standing outside Tree of Life Synagogue, the air is calm and quiet, filled with the scent of candles burning and thousands of fragrant flowers that line the front of the shul. It is an atmosphere of peace and healing as strangers from all parts of the world gather to pay their respects, mourn and unite.

In contrast, when I returned to my hotel lobby, I noticed the television reporting on local news stories and was shocked by what I saw. It was as if they were reporting on a different time and place in history. Were they talking about the same Pittsburgh I was in? The sensationalized nature of the news is designed to play on one’s fear and depict the synagogue not as a haven for healing, but as a “crime-scene” being swarmed by investigators. While that is the nature of news reporting, researchers have found that re-exposure to trauma can have lasting impacts, especially on children, who are led to believe that the threat is still lingering. Therefore, as a first step to helping our children cope, turning off the news (including social media) will prevent children from increased exposure and re-traumatization.

Every person responds differently to trauma, and the key is to recognize that there is no right or wrong way to react. There are only healthy and unhealthy ways. On the healthy spectrum, one may feel antsy, upset, angry or sad, and experience temporary physical

A memorial outside of the Tree of Life*Or L’Simcha Synagogue.

symptoms, such as loss of appetite or even cognitive impairment, such as feeling lost or confused. On the unhealthy spectrum, it is not uncommon for people to swing to extremes, where they either eat too much or not at all. Similarly, they may sleep all day or be up all night, feeling restless or confronting nightmares. While these reactions may be normal, they are not sustainable. It is therefore important to start simple conversations that check in and ask how one is feeling about what happened. Just talking can help relieve a great deal of stress. It is in this process that we validate and normalize the feelings of grief, frustration, anger, sadness, fear and so many other countless emotional reactions.

Very often, people say they are “fine,” but don’t act that way. This is the mind’s method of coping with pain, experiencing what clinicians refer to as denial. Therefore, even though everyone may seem and even act fine, there can be more harm in ignoring the elephant in the room than to casually bring it up and check in.

As an example, during my time in Pittsburgh, I was speaking with an adorable 8-year-old boy, who in a very age-appropriate and matter-of-fact way was telling me his feelings about lockdowns. While an adult may have been more serious about this conversation, the child was perfectly calm and happy. However, in the middle of talking, he heard the distant sounds of a siren as a police car drove by. He immediately froze with a stone-cold look on his face. He explained that he now hates sirens and never wants to hear them again. We talked about it at length and how it made him feel. I invited him to think about the possibility that sirens can also have a positive association, such as being safe and protected or even taking someone to the hospital to have a baby. His face lit up by the end of the conversation as his mind found peace with a comfortable reality — the possibility that sirens are not bad, and that is something he could more easily live with.

When exposed to fear and crisis, the brain signals a “fight or flight” reaction. As a result, the focus is on survival, not daily responsibilities. Therefore, if a person is in fear for his or her life, a conversation about doing homework may seem trivial, even upsetting. Both adults and children require some time to recalibrate and allow the brain to return to a normal pace of living with a feeling of safety. For many, this does not happen overnight, and even if one consciously feels better, returning on Shabbat to shul may once again bring back the feelings of fear and crisis. If, after several days, one is experiencing hypervigilance, feels anxious and “always on,” and is unable to return to normal functioning, it may be helpful to seek the support of a therapist. There is no shame in seeking such support, especially in light of how much this tragedy hits home.

One mother asked me how to respond to her older child who was not comfortable returning to synagogue. As parents of adolescents, we are all aware that kids will often find any reason to not to go. However, this is one to take seriously. If a child is anxious about going to shul, it is important to validate his or her fears. After all, someone walked into one and murdered 11 people. It happened. The fear that it could happen again is real. 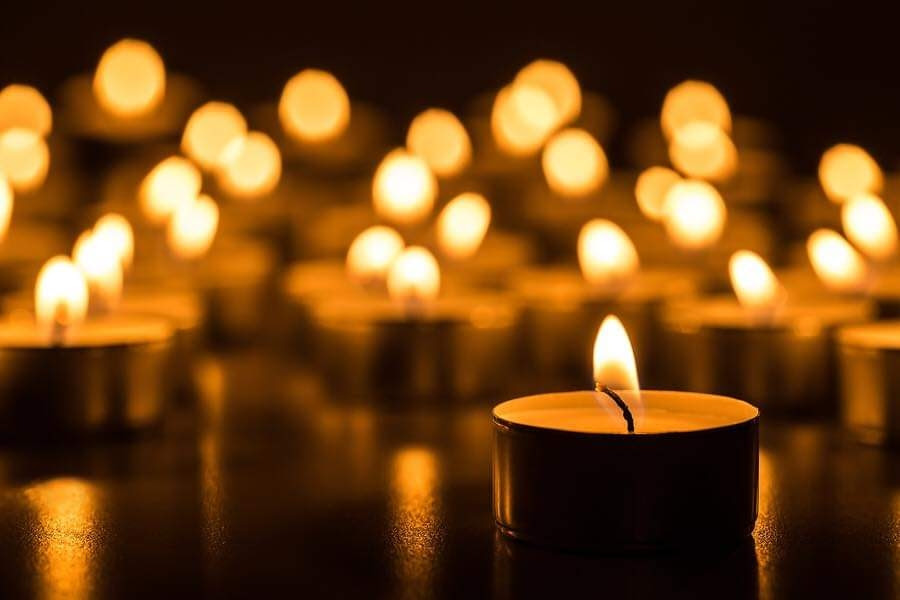 A vigil for the Tree of Life*Or L’Simcha Synagogue shooting victims.

Therefore, it’s not helpful to argue with children and tell them that they are being unreasonable or overly dramatic, or to try to convince them it will never happen here. Instead, listen and validate their fears, and consider allowing your child to pray at home on a temporary basis. Then provide therapeutic support from a professional and encourage your child to slowly face the shul again, perhaps at first from a distance, with the goal to ultimately return fully.

In my work with victims of the mass school shooting in Parkland, Fla., I observed a certain fragility that the traumatized youth were displaying. As an example, while in synagogue on Friday night, less than 48 hours after that, we gathered for an uplifting Kabbalat Shabbat, where people were singing and dancing. The chazzan (“cantor”), so full of ruach (“spirit”), was drumming on the bimah during “Lecha Dodi.” I soon noticed that with each strike of his hand on the table, the sound that rang out was like gunfire, which still haunted their hearts and minds. Watching them literally jump in fright with each bang, I politely walked over the chazzan and asked him to refrain from the drumming. This quickly allowed the traumatized teenagers to calm themselves.

While it may be difficult to know what particular things can trigger feelings of trauma, at this point in time, it is worth being extra-sensitive, especially in shul. This may include not allowing doors to slam, banging on the tables or speaking too loudly in the halls. Over time, when life resumes without incident or re-traumatization, the brain learns to once again relax, feel safe and carry on with regular daily life.

Children are notorious for being inquisitive and demanding answers. While most parents wish to at least pretend that we know what we’re doing on a daily basis, we strive to give our children the answers to their many questions. Sometimes, however, it’s OK to not have answers. When children ask deep theological questions, such as how God could allow this to happen on Shabbat to innocent Jews, a simple “I don’t know” goes a lot farther than trying to play prophet and guess what God’s master plan is about. There is power in modeling for children that there are some things we simply cannot answer.

I, for one, will continue to remind my kids that for thousands of years, people have tried to destroy us, but our strength is in our ability to rise up, and stand together and stronger in times of darkness. There will be time for calls to action later, but now it is time to stand together.

Rabbi Dr. Ari Sytner is director of community initiatives at Yeshiva University’s Center for the Jewish Future and a professor at YU’s Wurzweiler School of Social Work. A therapist in private practice, he also works as a trauma and grief counselor for organizations such as Chai Lifeline and Shalom Task Force.