After the shooting and tragic loss of life during April 27 Shabbat-morning services in Poway, Calif., an AI (artificial intelligence) security company executive immediately ordered 100 of his security systems. He then put out a request on a WhatsApp group for Chabad Houses to sign up to receive one, free of charge.

Within days, more than 100 Chabads signed up.

Miami Beach resident and Teaneck, N.J. native Ari Teman, 37, said his Teman GateGuard™ system, which, if bought retail, ranges in price from $3,600 to $5,600 with monthly Internet-connection fees, does not replace a full-time security guard or a closed-circuit camera security system, but it is a low-cost start with significant value. “We’ve given these units before to Chabads, and it’s enabled the rabbis to leave the door locked and still give them the ability to let others get in the building while they are away,” said Teman.

GateGuard is an Internet-enabled, virtually indestructible polycarbonate-and-solid-steel box that features a 10-inch touchscreen and camera with facial-recognition ability. It also has a fob and card reader. It can be installed next to a doorway or embedded next to it. It functions like a doorman intercom that starts recording as a person begins interacting with it, and tracks entries and exits based on pin codes and video surveillance.

The system is deployed in more than 1,000 rental properties in New York City, and was initially designed to prevent illegal sublets or other unlawful entry to multi-unit buildings. It is particularly successful at targeting non-primary residences, preventing rent-controlled apartment abuse or other illegal activities. Product designers are enabling a “Shabbos mode” on the device for the Chabad synagogue donations, and the screens can also post messages such as Shabbat candle-lighting times or directions to an event in a specific part of the building, explained Teman.

“A licensed security guard can cost $50 an hour, and we need armed security now, unfortunately,” he said. “Many have had it for years, but others are now being awakened to that reality. So during the week, when there is less traffic, people coming in for maybe one class, someone upstairs can let people in and increase the safety without increasing the security cost.”

Teman, who has a whole other career as a professional comedian, first became involved with Chabad when he attended Brandeis University nearly two decades ago. He became friendly with Rabbi Peretz and Chanie Chein, the campus shluchim (“emissaries”), and got involved with much of the Chabad House’s programming. He has since been a volunteer, a donor and a “friend of Chabad” at many Chabad programs in the last two decades. He is the founder of JCorps—a volunteer program for single Jews—and received a Jewish Federation Community Hero award for it in 2009. He also worked with Chein to develop a website for students to sign up for Shabbat meals, as well as other Jewish events or services.

“I’ve known Ari since the first day he arrived on campus as a freshman in August 2001,” said Rabbi Peretz Chein, who explained that it was his and his wife’s first day on campus at Brandeis at the same time Ari started college. Chein has kept in close touch with Teman over the years, and was one of the rabbis who signed up to receive one of the devices from GateGuard. “After Poway, we invited a detective from the local police who is the liaison for anti-terror activities, and the head of security at the university, to meet with us and discuss our security protocol. One of the first things they noted is we have an open-door policy. Students are coming in and out all day, visiting our library, to study or to visit. [This new] technology will make it easy to both increase the security but maintain the accessibility,” he said. 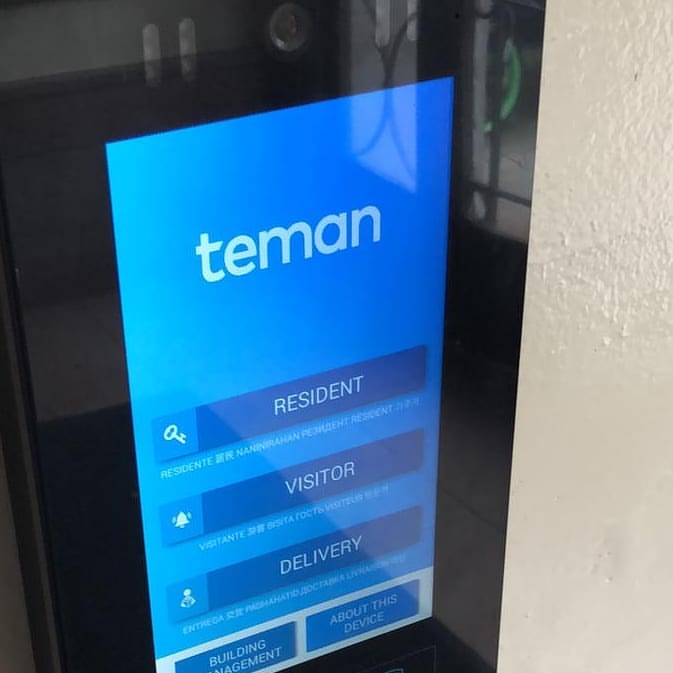 A view of the GateGuard Face Recognition Intercom and AI Doorman. Credit: Courtesy.

Chein added that while some Chabad Houses function primarily as synagogues or schools, it is the intent of the Brandeis campus Chabad to feel like a home for students (and it functions as a private home for his family), so he was never inclined to fortify it before now. “It looks like a regular home. Even if we have 150 people for Shabbos dinner, we still want to preserve the feeling of it as a home for students to visit,” he said.

“We now lock our doors, but we need to see who is coming in and out, and [hope to] easily monitor it with the system, and be more vigilant about safety,” he said.

‘Security package is just a start

Why did Teman decide to make such a significant investment in security for Chabad now?

“I was inspired by the rabbi’s words [Rabbi Yisroel Goldberg of Chabad of Poway]; this philosophy has carried me through so much. Here’s an opportunity to not just go on social media and have a debate about guns, but rather, think about what we can do immediately to increase security and safety at Chabad institutions,” he said.

Teman added that he felt the need to reach out to Chabads worldwide as a security professional and as a resource, and is setting up the capability to provide security resources for Chabads and synagogues as a philanthropic move. “In speaking to shluchim across the country, from California to New Jersey to Ukraine, they are all getting different advice from local vendors—and not all vendors are giving them sound advice. Maybe they are being sold infrastructure they don’t need. This is obviously very costly, and worse, it might not make them any safer,” he said.

Teman said he and his staff can also help synagogue personnel choose what to do in terms of applying for federal security grants.

“One of the biggest threats is people having a false sense of security or a panic button that has low response times,” he continued. “It’s not sufficient sometimes to have just one guard. Our package is just a start, but can be a start in detecting patterns. You will have a clear picture of a person who is making repeated visits trying to get in or casing the place.”

Teman reported that since 100-plus Chabad Houses have applied for the device, all the units ordered from his initial donation are spoken for. Therefore, once the company confirms that each Chabad has someone able to install it and set up the Internet connection—essentially, an electrician who can install something low-voltage—they will be shipped out. The unit has no monthly cost if the Chabad center hooks it into their own Internet connection. “If they want our 4g data pricing, we are working to get that donated and we can get them a discount if they need it,” he said.

Additional units can be ordered on an as-needed basis, and Teman said that based on interest, he will consider either ordering more to donate, providing them at a deep discount or helping organize co-sponsorships for security systems at individual Chabad centers. If a Chabad or other synagogue wants the unit and didn’t already apply for it, he will work to get them a sponsor.

To contact Ari Teman for the Chabad GateGuard project, visit this link: teman.com/Chabad.