(New York Jewish Week via JTA) — On Sunday, for the 36th time, Peter Berkowsky will wake up at 3:00 a.m., drive in the dark from his home in Livingston, New Jersey to Fort Wadsworth in Staten Island and set up a pre-race minyan, or Jewish prayer quorum, at the starting grounds for the New York City Marathon.

“We announce that the first minyan will be at seven o’clock in the morning. As soon as that’s over, and we have 10 more runners gather, we start the minyan again,” said Berkowsky. “We just continue to do it until there’s no more runners left” — a commitment that lasts the whole morning, until all 30,000 marathoners are off and running.

The New York City Marathon is back after a two-year, pandemic-induced hiatus, and Berkowsky is ready to celebrate what’s known as the world’s largest marathon just as he has since 1983.

Berkowsky, who is an attorney and civil servant during the rest of the year, hasn’t run a marathon since 1984, but he’ll never give up on the minyan. “It’s my baby,” he said. “There’s just too many people who rely on it.”

This story is part of JTA’s coverage of New York through the New York Jewish Week. To read more stories like this, sign up for our daily New York newsletter here.

Berkowsky believes the minyan is the longest established religious service of any kind at any major sporting event anywhere in the world, something the New York Road Runners, the marathon’s organizer, is very proud of.

In recent years, the minyan has been providing runners with the prayer accoutrements few would want to carry on the 26.2 mile-long race: prayer shawls, prayer books and the small black box and leather straps of the tefillin worn on the head and arm during the traditional morning service. Berkowksy partnered with a local Chabad to make sure they had enough.

In the past, runners would be able to check their own supplies and retrieve them after the race, but that service was halted in 2012. 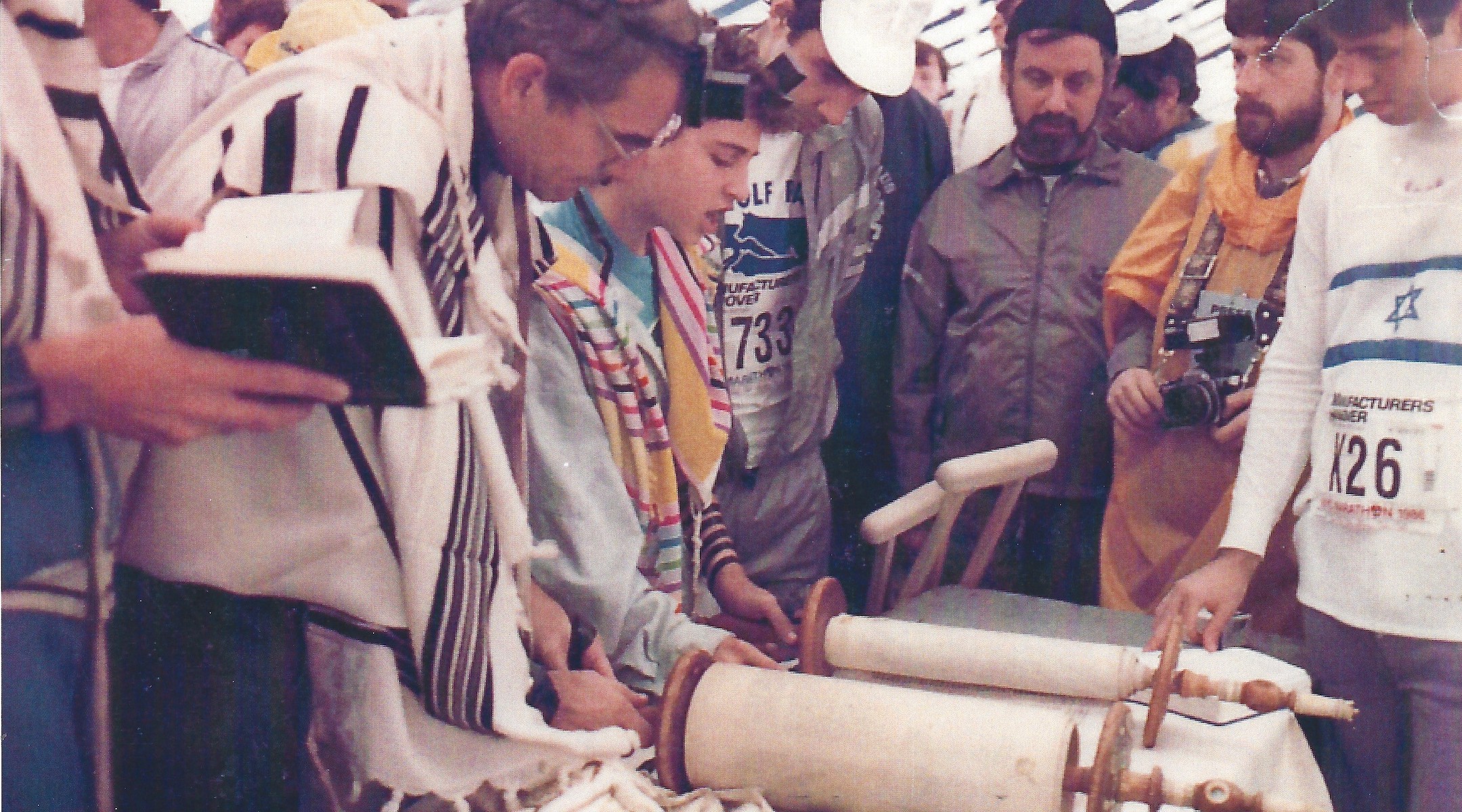 Minyan-goers read from the Torah in 1986, when the NYC Marathon fell on Rosh Chodesh, the minor holiday marking the start of the Jewish month, for the first time. (Peter Berkowsky)

It was a notice in The Jewish Week that helped get the minyan off the ground.

In 1983, Berkowsky, at age 41, had put on tefillin only a handful of times in his life. But when his mother died while he was training for the marathon, he committed to completing the full year of mourning, which includes saying Mourner’s Kaddish with a minyan three times a day.

He had to find a way to gather a minyan in Fort Wadsworth the morning of the race — so he put out notices in all the local Jewish papers.

Jim Michaels, a Conservative rabbi at the Whitestone Hebrew Centre in Queens, responded to a bulletin he had seen in The Jewish Week. Berkowsky recalled Michaels saying, “Yeah, I’d be interested. In fact, I davened all by myself in 1982. Fred Lebow came walking by and he did a double take when he saw me standing out in the middle of the parade ground with my tefillin on.”

Berkowsky and Michaels collaborated through word-of-mouth campaigns and news bulletins, and that first year, 26 people showed up. The second year, the number doubled, boosted by an Israeli team that wasn’t “necessarily observant,” but had been informed that the minyan was where all the Jewish runners gathered. 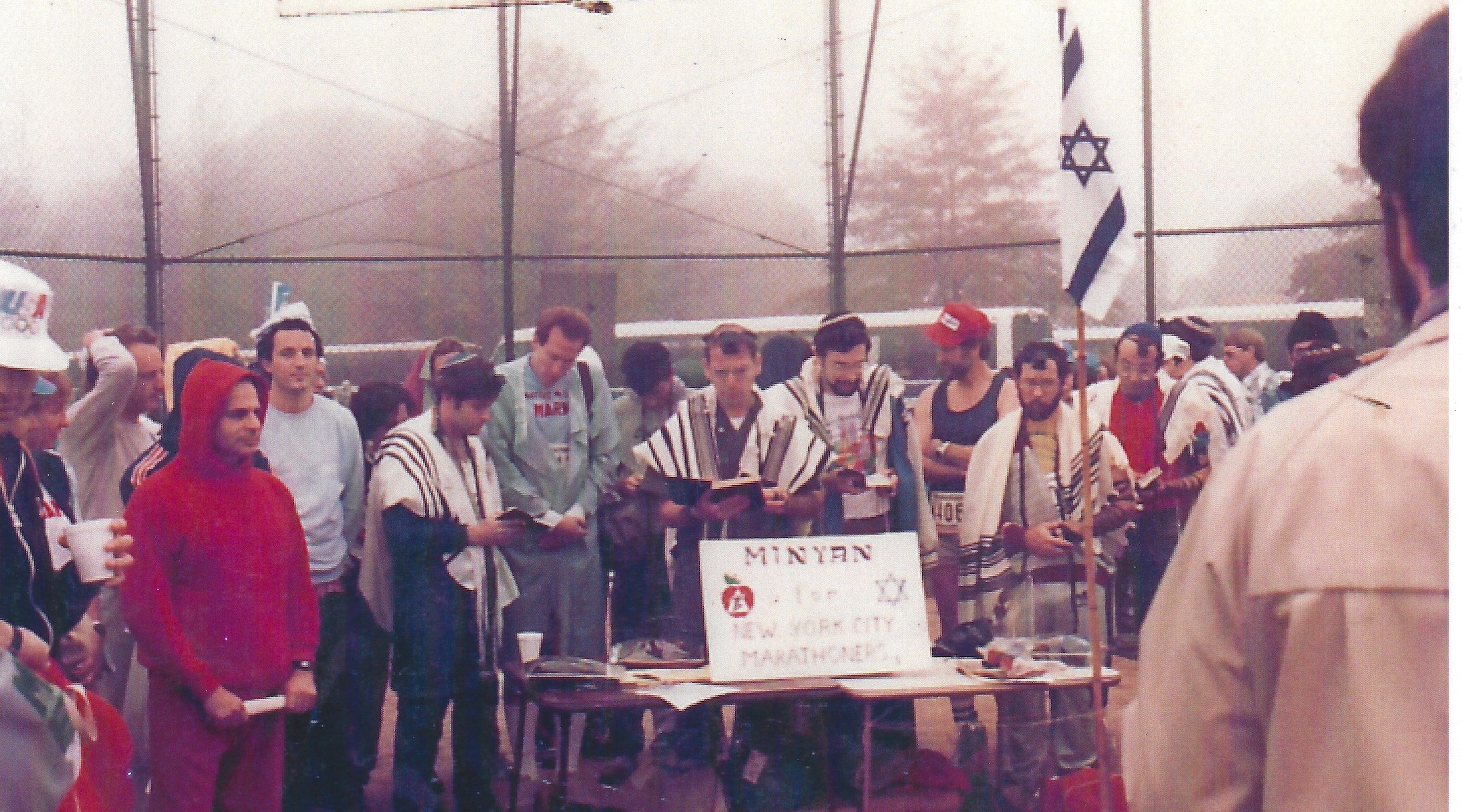 A photo of the NYC Marathon minyan in 1984, the second year the prayer service was held. Organizer Peter Berkowsky asks all participants to sign a roster with their name, hometown and contact information to keep track of everyone over the years. (Peter Berkowsky)

Michaels has since moved to Maryland, but the legacy of the minyan held. Berkowsky, along with his assistant Yisroel Davidson, now leads a team of 10 volunteers from all over the tri-state area and Israel. He estimated that over 200 people participated in different waves of the minyan the last year it was held, in 2019.

“The big surprise for me is actually how few people are saying Kaddish,” said Berkowsky, who started the tradition to cater to those needs. “We’ve had thousands of people participating in the minyan in the last 36 years. Very few of them are saying Kaddish. These are people who just want to daven in a minyan.”

Berkowsky made it one of the minyan’s goals to keep Fred Lebow’s name alive after he died in 1994. It was Lebow whom Berkowsky contacted when he noticed, two years in advance, that the 1986 race would land on Simchat Torah, and who ultimately moved the race to the first Sunday in November, a date that stuck. It was Lebow who organized a tent for the minyan the few times the race fell on Rosh Chodesh and the minyan needed to bring a Torah to the starting grounds to celebrate the minor holiday of the New Moon. (The Road Runner’s Society has provided a permanent tent since 2005 — this year it will have electricity and heaters.)

It was Lebow who would drive in a car ahead of marathon runners, cheering them on and ensuring everything ran smoothly. When the runners ran through Hasidic neighborhoods in Williamsburg, Lebow would yell in Yiddish, “The runners need water!”

More and more runners and minyan attendees, Berkowsky said, didn’t know Lebow and some don’t even recognize his name.

Lebow, Berkowsky explained, was much less religious than his family members, who moved to Israel, Brooklyn and Monsey, New York when they arrived in America as Holocaust refugees. “But he was becoming much more observant in his last few months and years, and I think we probably had a lot to do with that,” said Berkowsky. When Lebow was diagnosed with brain cancer in 1990, the minyan gathered around him to say a Mi Sheberach prayer for healing. 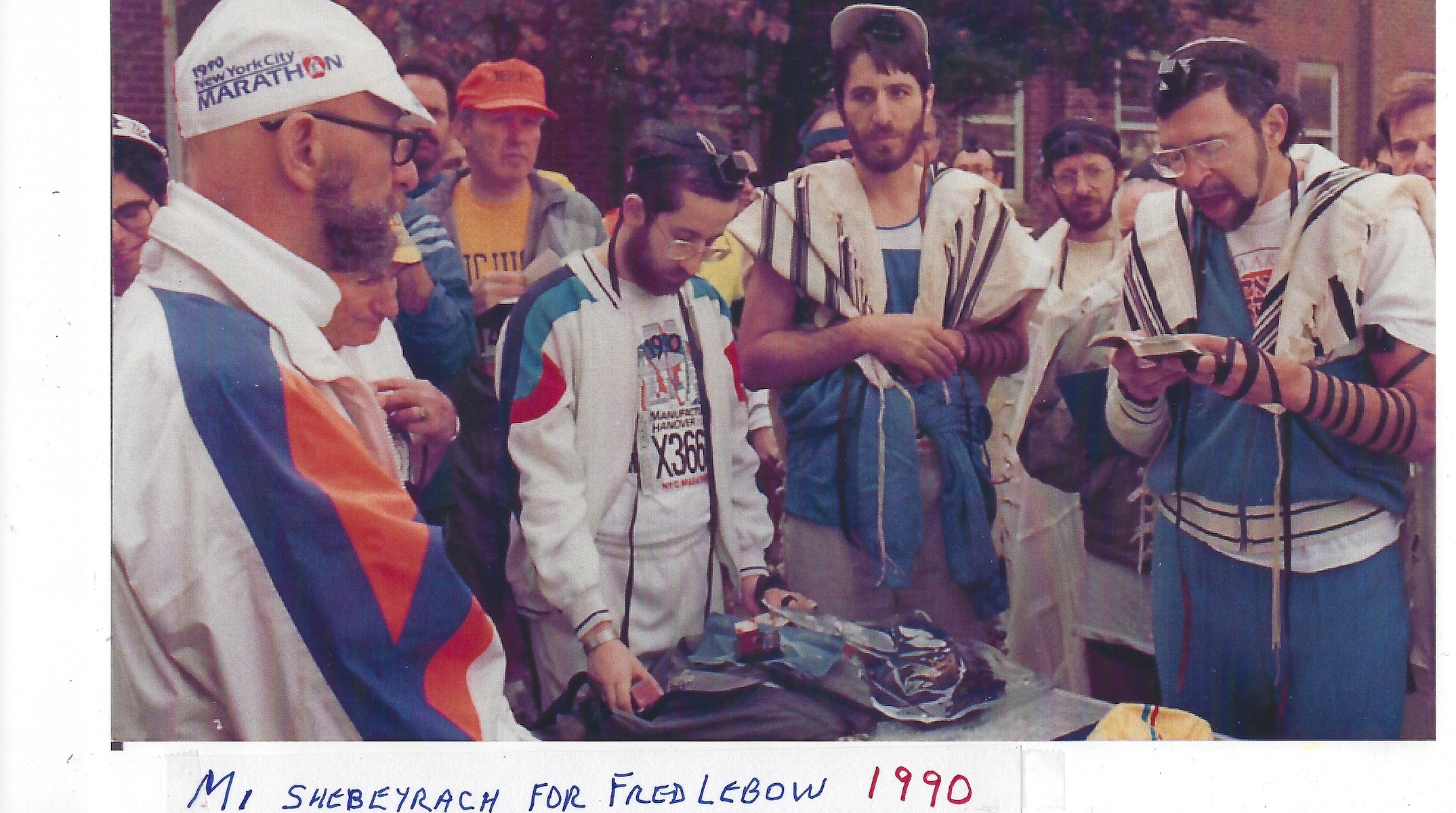 In 1990, Fred Lebow, the marathon’s founder and himself a Holocaust refugee, was diagnosed with brain cancer. The minyan recited the “Mi Sheberach” healing prayer for him. “There wasn’t a dry eye,” said Berkowsky. “Nobody who was there will ever forget that moment.” (Peter Berkowsky)

“I mean, the guy was a mensch,” Berkowsky said. “He really was.” The last time Berkowsky saw Lebow was when the race organizer stopped by the minyan in 1992. Lebow had decided, for the first time, to run in his own marathon that year. It was also the only year he put on tefillin at the minyan. He died two years later, at age 62.

Berkowsky, who also helped start a minyan at the Miami Marathon, believes the New York City Marathon is unique. “There’s a million people lining the streets to cheer you on from start to finish, in all different types of neighborhoods in all five boroughs. There’s no other race like that. I like to think that our minyan is one of the things that makes the New York City Marathon unique, certainly for Jewish runners.”

Berkowsky’s favorite part of the service is when all the runners yell together the last morning blessing: “Hanoten LaYoef Koach,” which thanks God for giving strength to the weary — a particularly poignant blessing to say before the minyan’s runners depart on their 26-mile journey.

“Some people who put on tefillin for the first time at the minyan, who knows? It might change their lives, you know, they might decide to do it more often,” said Berkowsky, who said he has not missed a day of putting on tefillin since he began this minyan. “It’s just a real good, feel-good thing.”