“I was incredibly nervous because I had never worked with children with disabilities before, but everything changed for me the moment I walked through the door,” said Jordan Margolis, a resident of Pittsburgh, Pa., who is spending his gap year at Yeshivat Netiv Aryeh and volunteers weekly at ALEH. “There was an energy that I had never felt before, and it drew me in. I know now that it’s a special blend of unconditional love and true acceptance.”

Driven by a desire to promote acceptance and true disability inclusion, thousands of Jews of all ages have traveled from cities across North America to volunteer at ALEH, Israel’s network of care for children with severe complex disabilities. While each volunteer is introduced to ALEH in different ways, decades of volunteers have concluded their service with the assertion that they gained so much more from the experience than they gave: Above all a newfound appreciation for humanity and new understanding of abilities.

A veteran camp counselor, Margolis enjoys helping young minds connect to Jewish life and tradition. But the idea of volunteering with children with disabilities proved daunting initially, as he was unsure how he would communicate with the children in his charge.

“Over the last several months, I have learned that verbal communication isn’t the only way to connect with someone, and it’s not even the most powerful,” said Margolis. “Every week, I dance, sing and play with the ALEH residents, and we communicate with smiles. These are deep and meaningful exchanges that are unlike anything I’ve ever experienced before. It seems that I had to be silent, attentive and accepting to learn a more profound method of communication.”

‘A lesson in compassion, acceptance and humility’

Dr. Violet Esser, a retired dentist from Toronto, Canada, also sees her annual two-month volunteering stint as an invaluable learning experience about inclusion and the power of the human spirit.

Every year, she spends the spring and summer months knitting blankets for the babies and toddlers at ALEH’s residential facility in Jerusalem, and then travels to Israel to personally deliver the beautiful handmade blankets, often asking her children and grandchildren to accompany her so that they can also take part in the mitzvah. And because one good deed deserves another, “Super Savta” (the Hebrew word for “grandmother,” as she is known to many in the organization) spends the next two weeks volunteering at ALEH’s rehabilitative village in the Negev looking after the toddlers in the special-education school.

“It just feels right to spend my time in an environment where human dignity and the respect for each individual are of the essence, where they regularly accomplish the feat of converting disability into ability. Contributing as part of this team helps me become more sensitive towards others, and is a great lesson in compassion, acceptance and humility,” said Esser, whose experience as a medical professional and a grandmother are always put to good use while volunteering with ALEH.

“As human beings, we can never be done learning and growing, and I always look forward to returning to my family after gaining such deep insights into the human condition.”

While volunteering in the Negev, Esser met a fellow Torontonian named James Skinner, an employee of the Ontario Government’s Ministry of Natural Resources, who spends most of his time fighting forest fires. Though he has always been involved in nature conservation and other good acts, in recent months Skinner started to feel that something was missing from his job and his life, and he became anxious to find a way to “give back to people who needed care.” 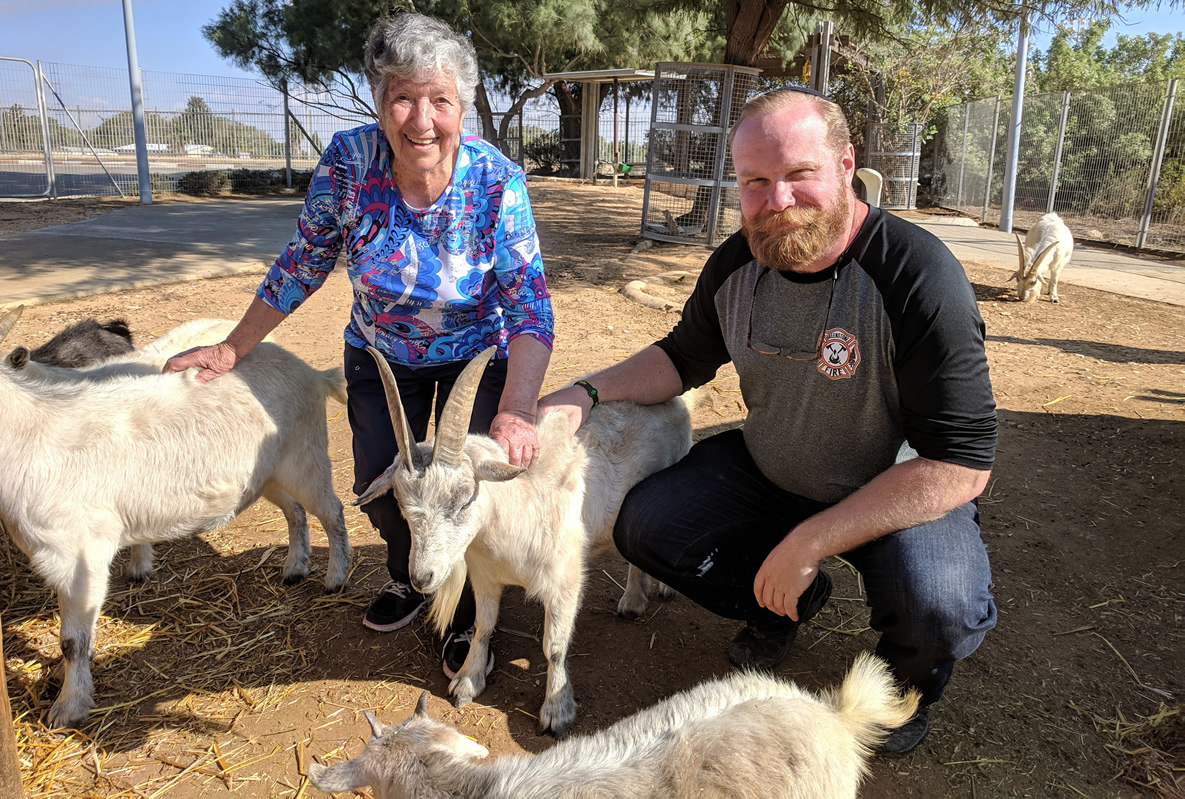 Fellow Toronto natives Dr. Violet Esser and James Skinner became fast friends while volunteering at ALEH’s rehabilitative village in the Negev, where Esser looked after the toddlers in the special-education school and Skinner tended to the therapeutic petting zoo. Credit: ALEH.

Skinner, who had been exploring converting to Judaism, began attending the Village Shul in Glinton. During a Shabbat service, he learned about ALEH and decided to book his very first trip to Israel to lend a hand with Israel’s disability community and kick-start his conversion process. Though he only intended to stay at ALEH for a month, he fell in love with the residents under his care — and became fast friends with Esser — and extended his trip by an additional month. He plans to take what he learned at ALEH back to Canada and volunteer with Torontonians with disabilities.

“The focus on integrating individuals with disabilities into the community is what spoke to me most and made it clear that I had to stick around and give more of my time, more of myself,” explained Skinner, who cared for a group of adult men with disabilities and also tended to ALEH’s therapeutic petting zoo.

“The service of firefighting is exciting and important, but it was always lacking that human connection. My volunteering experience with individuals with disabilities lit a fire in my soul and provided my first real glimpse into the beauty of humanity,” he said. “When we internalize the fact that we are all created in the Divine image, and we all work together to assist, appreciate and elevate each other, our world becomes a near perfect place. That’s the world I want to live in.”