Until two weeks ago, Alberto Galante had never been to Russia. The 2018 FIFA World Cup drew him to Moscow, St. Petersburg, and Rostov-on-Don, where he cheered on Mexico’s national soccer team as they advanced through the competition. While Galante — who traveled with his son and friends — was thrilled to see Mexico stun the world in its upset win over defending World Cup champion Germany, that was not the only happy surprise of his 12-day trip: He also got to see living, breathing Jewish life in Russia, which not only left him impressed, but inspired.

“It was a very spiritual experience, even though it wasn’t supposed to be,” says Galante, 49, who lives in Miami but is originally from Mexico. “I expected to see Chabad, but I didn’t expect what we experienced; it was uplifting.”

There are at least 10,000 Israelis among the 1 million soccer fans who have descended upon Russia for the World Cup, but that number does not reflect the thousands of Jewish visitors who have come from all around the world, especially from Latin America. 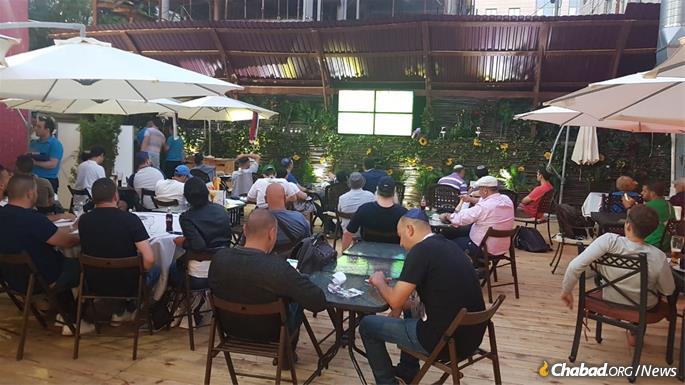 Outdoor seating and kosher refreshments made for an ideal game viewing spot for many tourists in Moscow.

“We had people from New Zealand, Canada, Argentina,” says Rabbi Mordechai Weisberg, director of Chabad-Lubavitch of Moscow, located in the Moscow Jewish Community Center (MJCC) in the Marina Roscha neighborhood of the capital. “People have been flocking here for kosher food, to pray, or just to spend time. They just type ‘Chabad Moscow’ into their GPS, and they are led straight here.”

They are also directed by apps released for iPhone and Android devices, and a website with all relevant Jewish tourist information, set up to orient visitors.

Weisberg met with FIFA president Gianni Infantino in the runup to the games, sharing with him the Jewish community’s World Cup plans throughout Russia. MJCC, the seven-story heartbeat of Jewish life in Moscow, has a dedicated, multi-lingual information center for visitors, and is home to multiple kosher restaurants, including Shtetl. A pleasant outdoor restaurant seating area with screens showing games throughout the country has been set up on the property of the Jewish center, where fans are able to sip a kosher cappuccino while keeping up with the matches. Since the start of the games, each Shabbat has seen hundreds join for big Shabbat meals, and more than 1,000 are expected for the Shabbat before the finals. 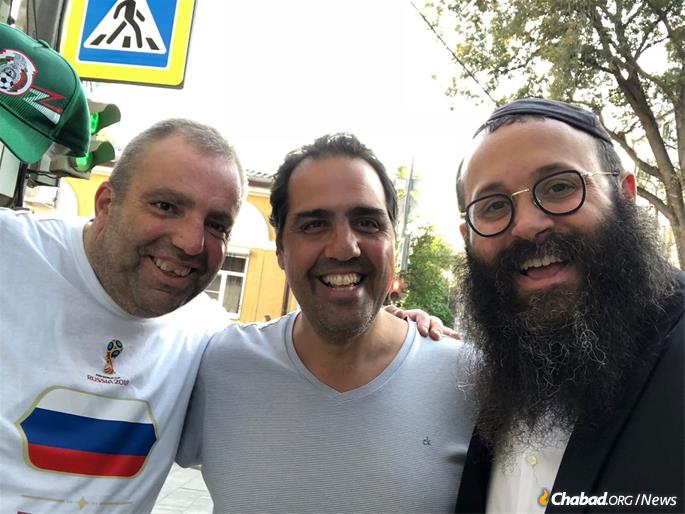 While in Moscow, Galante and his group were able to visit the Jewish Museum and Tolerance Center, down the block from the MJCC, and take in a meal at the JerusalemRestaurant—known for its rib-eye and lamb chops—on the rooftop of Chabad’s Bolshaya Bronnaya Synagogue in Moscow’s center.

But it was Galante’s visit to Rostov, where Mexico beat South Korea, that struck him most. “Where else do you meet a Jew who made the decision to have a brit milah at age 63?” he marvels. In Rostov, Galante met many more Mexican Jewish fans, some of whom he knew and others he didn’t. 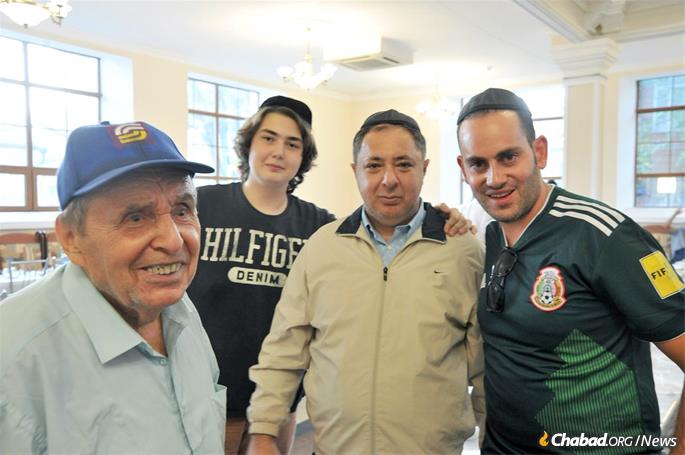 Jewish tourists and locals mingle in the Rostov synagogue.

“It’s definitely brought a lot of excitement,” says Rostov’s chief rabbi Chaim Danzinger, who also directs Chabad of Rostov. Prior to the games, Danzinger recorded a short video welcoming Jewish visitors to the historic city that he and his family have called home for a decade. The video caught fire on social media and WhatsApp, turning him into a minor celebrity among tourists. “People have been recognizing and coming up to me in the streets, pulling out their phones to show how they know about me.”

Rostov’s restored synagogue is just across the Don River from Rostov Arena, where the games are being played, making it a convenient stop for Jewish visitors. Galante stayed in a hotel quite a distance from the synagogue, and so on Friday night—while some 100 guests gathered for a large meal and farbrengen at the synagogue—made kiddush in his room on wine provided to him by the rabbi. The next day, he walked an hour-and-a-half, joining others for a Shabbat meal at the rabbi’s home. 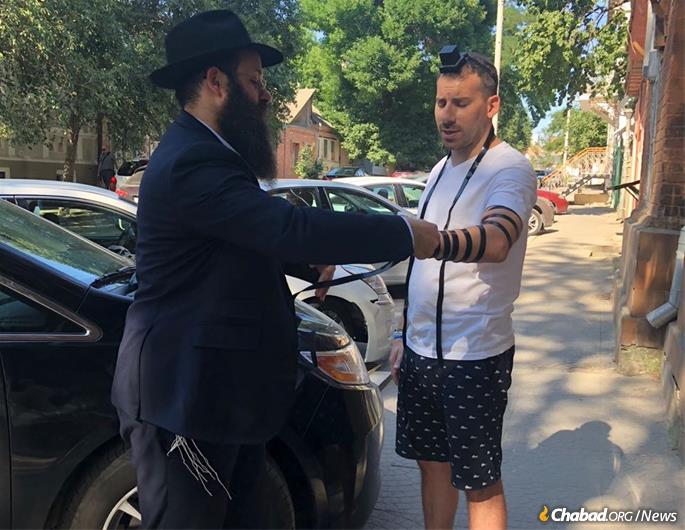 “This has been an amazing experience for our community as well,” explains Danzinger. “Here, who is usually the one who knows how to read Hebrew and pray? It is a rabbi. So it’s beautiful for our community to see a large group of Jews, regular laypeople, on their vacation, come to synagogue, put on a tallit and pray.” 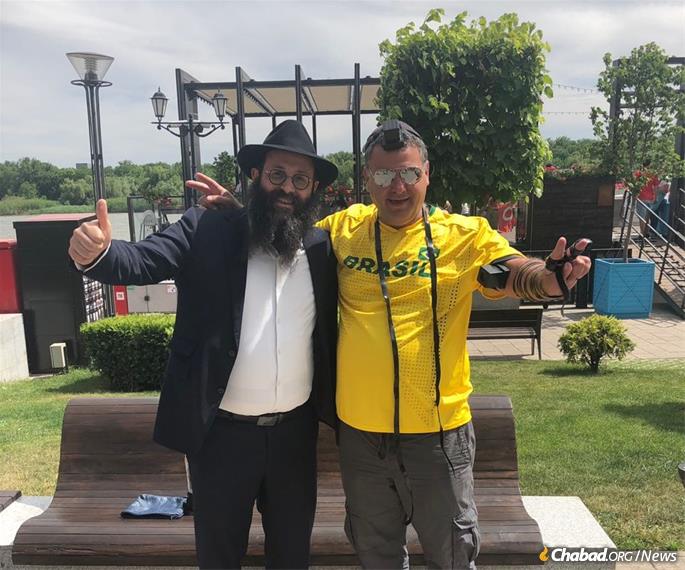 Aside from Mexican Jews, Danzinger says groups have come from Brazil and Uruguay, as have Israelis, who can easily make the two-and-a-half hour flight from Israel to watch Iceland play Croatia. Rostov was for a time the headquarters of the Lubavitch movement, and final home of the fifth Rebbe, Rabbi Sholom DovBer Schneersohn, who passed away and was buried in Rostov in 1920. Many visitors have taken advantage of their proximity to the holy site and gone to the city’s old Jewish cemetery to pray at the gravesite.

From West to East 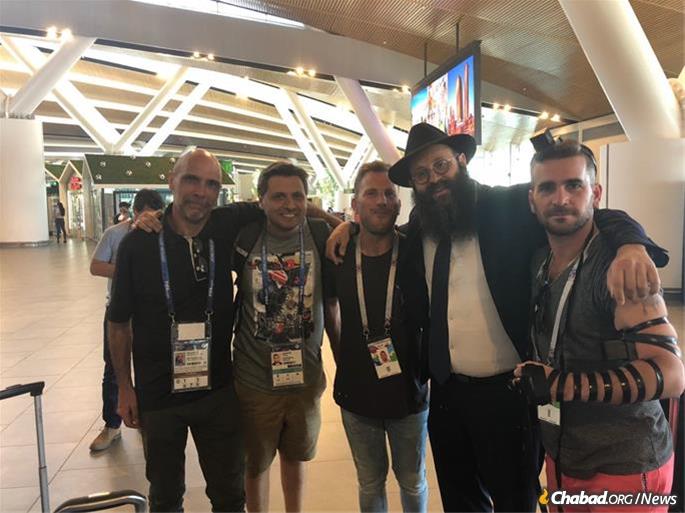 Since 1998, Rabbi David and Avital Shvedik have been a key part of reestablishing Jewish life in Kalningrad, which was the East Prussian city of Königsberg until the end of World War II. The city has a long and lustrous Jewish history, but was utterly destroyed during the war. The choral synagogue was ravaged on Kristallnacht, and the Jewish community deported in 1942. Recently, the Jewish community received the land upon which the choral synagogue once stood, and a full reconstruction of the historic structure is underway. A new 23-ton dome was lowered onto the structure earlier this year, which is timed to be completed this November—80 years since the events of Kristallnacht. 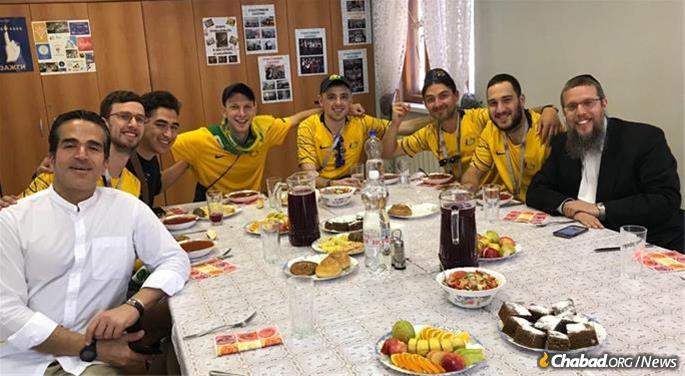 Enjoying a kosher meal and a Torah thought with Rabbi Shlomo Deutch in Samara.

“We have been seeing a constant stream of visitors coming in for kosher food and to put on tefillin,” says Shvedik, who notes that Kaliningrad, a Russian island of sorts, almost never gets foreign visitors.

At the other end of the World Cup map, in Ekaterinburg, Rabbi Zelig Ashkenazi, the chief rabbi of Russia’s fourth-largest city, has experienced a similar phenomenon. 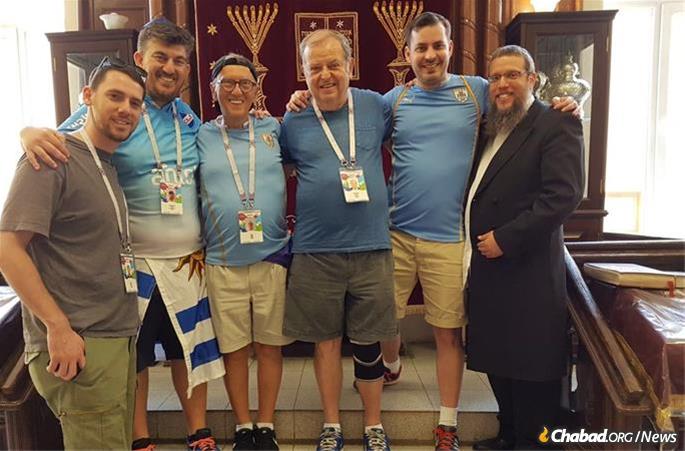 Rabbi Shlomo Deutch with visitors in the Samara synagogue.

“Hundreds of Jews from France, Uruguay, Peru, Mexico, Japan and other countries came to Ekaterinburg to participate in the World Cup,” he says. “Most of them come to the community center to participate in prayers and Shabbat meals and take advantage of the kosher cafeteria.”

Ekaterinburg’s impressive Rohr Chabad community center is located in the center of the city and includes a synagogue, men’s and women’s mikvahs, and a soup kitchen. 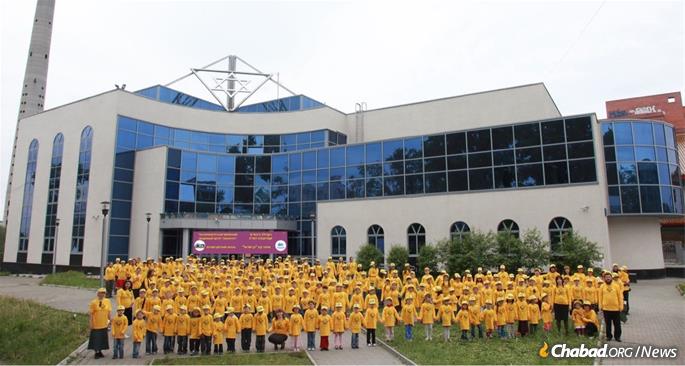 The Ekaterinburg Chabad center is a welcoming bastion for locals and tourists alike.

Chabad in St. Petersburg has seen a constant stream of visitors to its Choral Synagogue, as has Chabad in Samara, which, together with Chabad of Uruguay, released a short video inviting Uruguayan Jews to visit Samara’s towering synagogue and Jewish community center.

Galante, who returned home to Miami this week, sums up the general feeling he, his group, and the other Jews he spoke with felt regarding Jewish life in Russia: “It is extraordinary.” 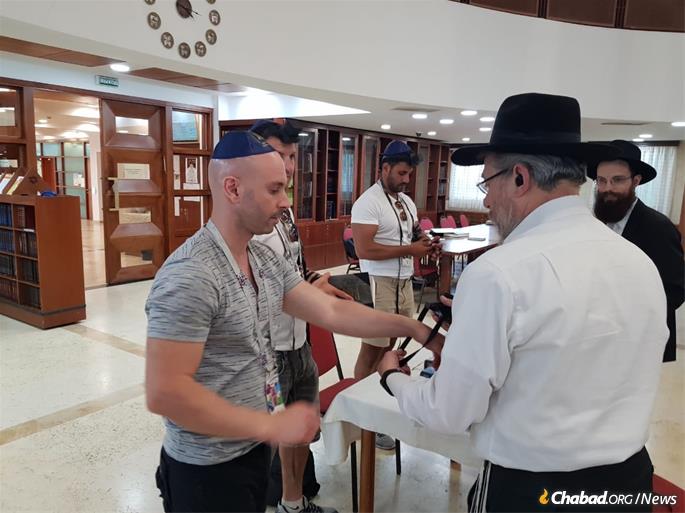 Chabad emissaries in Moscow assist visitors with tefillin and other Jewish needs.

This article was originally published at Chabad.org/News.