GLEN JEAN, West Virginia (Crescent City Jewish News via JTA) — A Reform rabbi from Maryland is leading the Faith and Beliefs program at the World Scouting Jamboree, the first such event held in the United States since 1967.

For the past two weeks, some 45,000 Scouts representing 156 nations have gathered at the Summit Bechtel Reserve here for sports, camping, stadium shows and cultural celebrations.

As the chair of this year’s Faith and Beliefs area, Rabbi Peter Hyman is supervising all 10 participating religions – Protestantism, Won Buddhism, Buddhism, the Catholic Church, the Orthodox Church, Sikhism, Islam, the Church of Jesus Christ of Latter-Day Saints, Judaism and Hinduism.

Also included are the Messengers of Peace, a global community service program Hyman helped establish with funding from the late King Abdullah of Saudi Arabia.

Hyman, a longtime religious leader of the Boy Scouts of America, is no stranger to world Jamborees, which are organized by the World Organization of the Scouting Movement, of which the BSA is a member. This is his eighth World Scouting Jamboree.

Hyman, who has previously served congregations in Sarasota, Florida, Beaumont, Texas and suburban Philadelphia, has only missed two national and world jamborees – each typically held every four years, since 1981.

“The first time I was a chaplain at an international event was the Jamboree in [New South Wales] Australia in 1988,” said Hyman. “It was the most moving, inspirational and hope-filled experience I’ve ever had and, to this day, it remains that.” 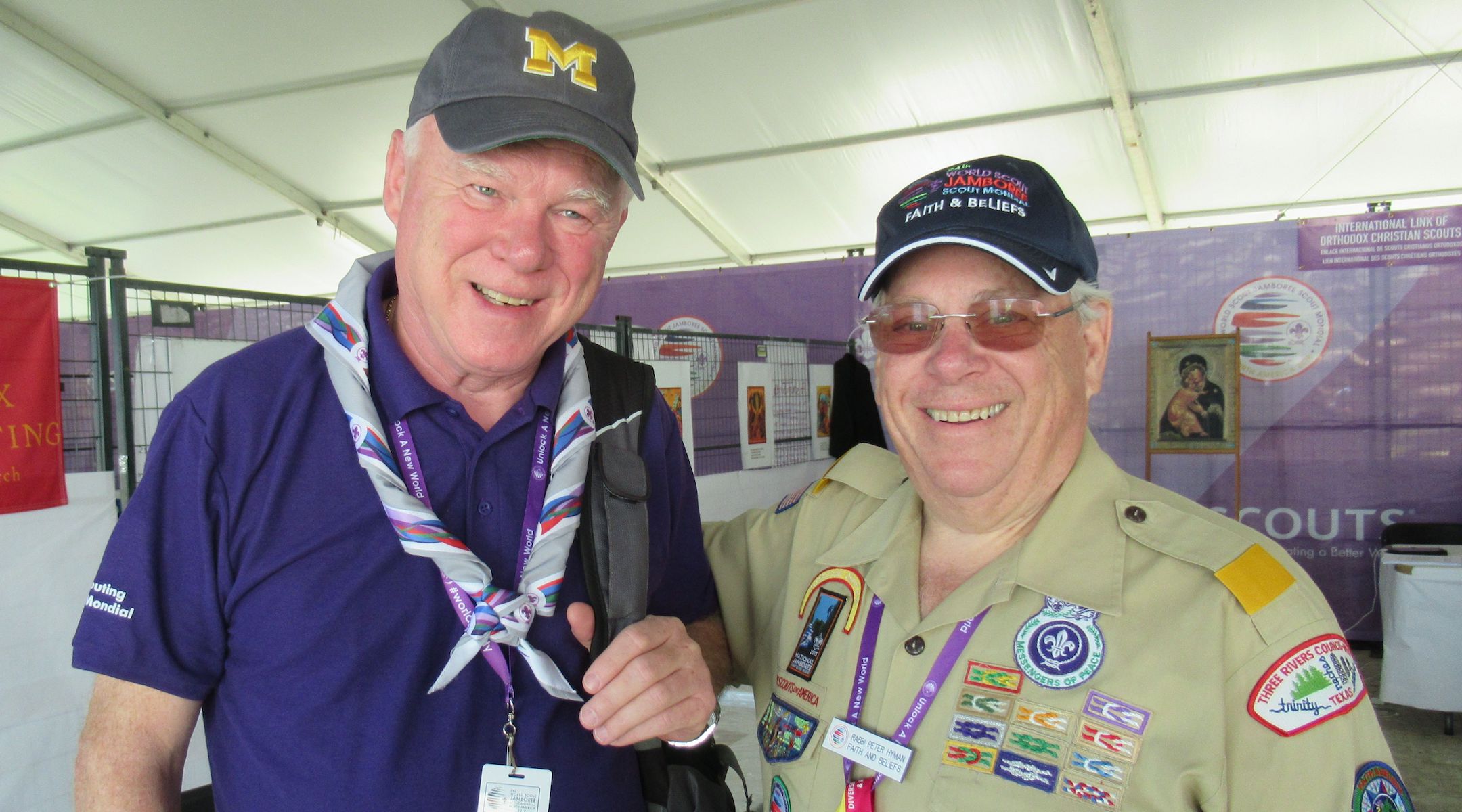 An Eagle Scout, Hyman as been immersed in the Scouting movement since his youth and was drawn to serve as a Jewish leader early on. He previously served as the chairman of the National Jewish Committee on Scouting for four years and was its National Chaplain for 24 years.

Hyman said he was chosen to lead this year’s faith programming “because of the depth of my experience. But also the fact that I enjoy – with great humility and a real sense of gratitude – a good reputation in the Boy Scouts of America. The senior leadership with whom I’ve had relationships over the years at various events nationally and internationally felt that I was capable of making it work.”

Chip Turner, the rabbi’s co-chair and a former Religious Relationships Committee chair for the BSA, has been working with him for more than three decades, sometimes as his boss, at other times as his co-chair.

“We’ve grown to be great friends, strengthened by our opportunities to serve together and joined by Scouting principles,” said Turner, who has served on the board of Programs of Religious Activities with Youth, an organization of Protestant and independent Christian churches. “Hyman is gifted with tremendous personal skills, which makes working with him an even greater pleasure.”

At this year’s World Scouting Jamboree, the chaplaincy was located in four major camps for scout contingents and a single camp for the International Service Team comprised of nearly 9,000 adults from around the world. Each camp was further subdivided into four subcamps.

In addition to a daily minimum of four Catholic masses in each of the subcamps, the Faith and Beliefs program is responsible for an exhibits area that includes all of the participating faith groups. A large worship tent has been designated for the daily prayers and meditations of Muslims and Buddhists, for example.

A Torah scroll was borrowed from a nearby Charleston congregation for observant contingent members to hold worship services on Monday, Thursday and Saturday mornings. Observant Jewish scouts, predominantly from England, France and the United States, were treated to a kosher Oneg Shabbat on Friday night and a Kiddush following Shabbat worship services.

Kosher meal services were available to all observant Jewish scouts who requested them and special events such as a central Havdalah service were coordinated through the Faith and Beliefs team.

Sunday morning brought services for the Church of Jesus Christ of Latter-Day Saints, a unified Protestant offering, an Eastern Orthodox service officiated by an Archbishop from Sitka, Alaska, and several Catholic masses, all attended by groups from the hundreds into the thousands.

A papal nuncio officiated at the Sunday morning Jamboree Catholic along with several bishops and priests.

Hyman is mindful of his duties as a Jewish faith leader, but he is also open and welcoming as well as to the other, larger numbers of scouts from the world’s religions.

“What the Boy Scouts of America has allowed me to do is nothing short of amazing,” the rabbi said. “It gives me goose bumps and it humbles me. I’ve been able to represent the United States, the BSA and Judaism in a number of fronts and a number of places and been relatively successful in those moments.”

Hyman was the first BSA chairman of the Messengers of Peace in 2006, which has a huge worldwide Islamic component, he said.

“This makes a statement on a global level for me to have been chosen as the chairman of the Messengers of Peace. That I got to chair it and that I was selected by the World Jamboree leadership also makes a profound statement of inclusion of recognizing that talent is spread out among all of us,” he said. “It’s remarkable.”

As a result of his work with the Messengers of Peace, Hyman traveled to Saudi Arabia in 2006 and was given an award by King Abdullah, an event he considers one of the most significant of his life.

Hyman also weathered a storm of controversy during the turbulent years when the BSA’s adult standards policies dealing with the LGBT community forbade same-sex parents and leaders along with gay scouts. That put him at odds with his own Union for Reform Judaism and the Conservative movement.

“When we were going through the issue of membership standards, there were people in my congregation who tried to make me resign,” Hyman said. “What I basically said to them was: in order to enact change, one must be on the inside. You can never change from the outside in, only from the inside-out.”

A 2013 vote by the BSA’s membership allowed gay youth in the organization. In 2015, the executive board voted to end its ban on gay adult leaders.

“I’m very proud of the fact that we were able to move that in a direction that allowed many of us to remain in the organization, loyal to the organization and continue to participate in it,” Hyman said.

What hasn’t changed is the BSA’s insistence that scouts and leaders demonstrate “an obligation to God” and subscribe to its “Declaration of Religious Principle.”

“Baden-Powell had a vision for the world,” Hyman said, referring to Robert Baden-Powell, the British army officer who founded the scouting movement in 1922. “It is not unlike the vision of the world that we see presented in Jewish liturgy, a world where people are connected, where people get along, respect each other and recognize the image of God on the face of the person whose eyes you are looking into.”