Exactly 75 years ago, Normandy was the site of one of the largest military invasions ever staged. Forever known as D-Day, June 6, 1944 marked the turning point of World War II, in which 156,000 American, British and Canadian troops stormed 50 miles of fiercely defended beaches in northern France.

This week, U.S. President Donald Trump will headline a flurry of ceremonies, presentations and memorials that will commemorate the 75th anniversary.

Among those present will be Rabbi Mordechai and Zlata Lewin, co-directors of Chabad of Caen since 2014.

In an interview with Chabad.org, Rabbi Lewin shares what it’s like to serve as the only rabbi along the beaches soaked with blood and hallowed with bravery.

A: To start with, can you tell us a little about the local Jewish community?

Q: Normandy is a large area served by five Chabad couples, each in a different community. My wife and I are in Caen, which is on the coast, the site of the D-Day invasion.

Historically, the Jewish community was Ashkenazi, from Alsace, the birthplace of French Jewry in the Middle Ages. Most of them have since passed away or moved on, and the current community, approximately 100 strong, are Sephardic immigrants from Algeria and their descendants.

There is a synagogue here with services every Shabbat. Our Chabad House serves as a center for classes, communal events, women’s programs, kosher catering and activities for kids. We operate a small day school for children from throughout Normandy and a Gan Israel day camp, where we expect 50 children this summer. 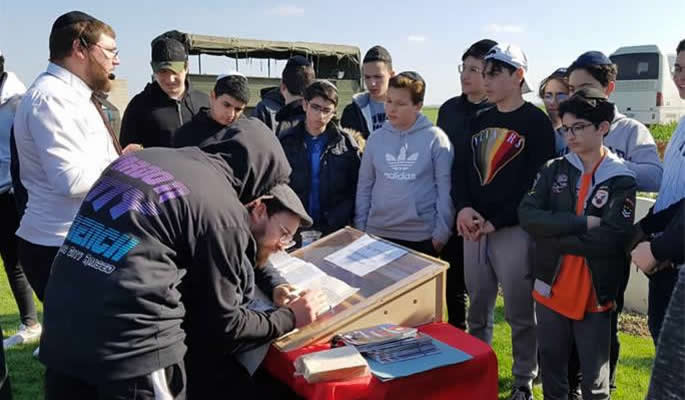 A scribe writes letters in a Torah scroll being preparedto honor the lives lost on D-Day. Credit: Chabad.org/News.

Q: Who else do you serve?

A: Caen is home to 30,000 students distributed between four public universities and 20 recognized private schools. Of course, there are Jewish students among them, and we operate a Chabad on Campus for them.

And then there are the tourists. Caen has dozens of museums, memorials and educational programs dedicated to D-Day that attract Jewish visitors from all over the world.

Shortly after we arrived, we set up a kosher catering facility so that Jewish groups are able to come here and enjoy a full Jewish experience. With time, we educated ourselves more and more about the history of the place, and we now offer our own tours.

We began with synagogue groups and senior clubs, and have since expanded to include school groups as well.

Q: What’s it like to show people around the site of so much death and destruction?

A: It’s actually quite touching. No matter how many times I see and say the same thing, it hits me again. These were young men — boys, really — who traveled 8,000 miles away from home and willingly put themselves in grave danger for the greater good. Jew or non-Jew, they all put their lives on the line.

Knowing full well that they might be taken prisoner of war, many Jewish soldiers chose to keep their Jewish identification and carry their siddurim (prayer books) and tefillin with them.

We have a collection of artifacts that we share with visitors, including a siddur that an American soldier carried with him during the invasion. 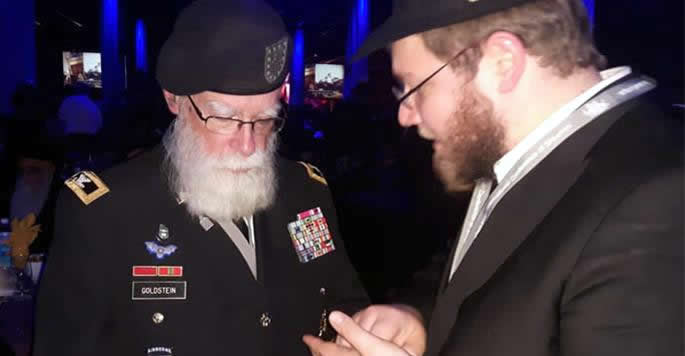 Q: What more can you tell about the siddur? How did you get it?

A: I received it from the Rabbi Shmuel Lewin, the Chabad rabbi in Deauville, another city in Normandy. There was an abandoned building there that had once been a military hospital for Allied troops. They were renovating the building, and the workers found the siddur. Recognizing it as a Jewish artifact, they gave it to the rabbi, who passed it on to me.

You can see that the soldier had marked off the pages for Tefilat Haderech (Traveler’s Prayer) and Havdalah, which marks the end of Shabbat.

Q: With the big 75th anniversary around the corner, what are you planning?

A: For one thing, there will be a group of American chaplains present who asked us to help them with kosher food and other accommodations, which we are glad to supply. In addition, we hope to be present at the ceremonies, representing our fellow members of the local Jewish community and Chabad. 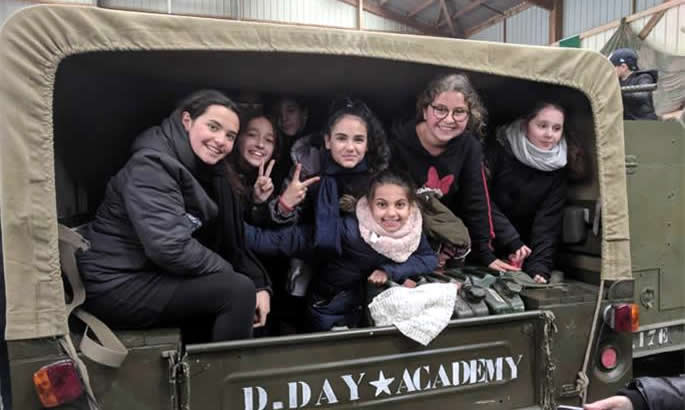 Q: Any final words for readers?

A: As much as we celebrate the past, we are also focused on the present. The Chabad Houses of Normandy are in the process of writing a brand-new Torah scroll in memory of the soldiers who died here. We have written letters of this Torah in many significant locations, including a Nazi bunker and cemeteries. Whenever a large group comes, we bring a sofer (“scribe”) to write another letter in the Torah with them, literally writing them into history.

Torah is a living entity, and the Jewish people are alive and flourishing. When the Jews of Caen and our guests study Torah and follow Torah, we become a living testament to our people’s eternal nature. Hitler came and went, but with G‑d’s help, the Jewish people live forever.

This article originally appeared on Chabad.org/News.