(JTA) — The bread-sliced bagel was an accident.

That’s what the former co-owner of Panera, Doron Berger, told me Thursday night. We talked on the phone more than 24 hours after a tweet of a few bagels, sliced like bread loaves, struck the internet like a nightmare and sparked a thousand hot takes.

Twitter users famous and obscure lambasted Alek Krautman, a St. Louis native, for suggesting there is more than one way to slice a bagel. 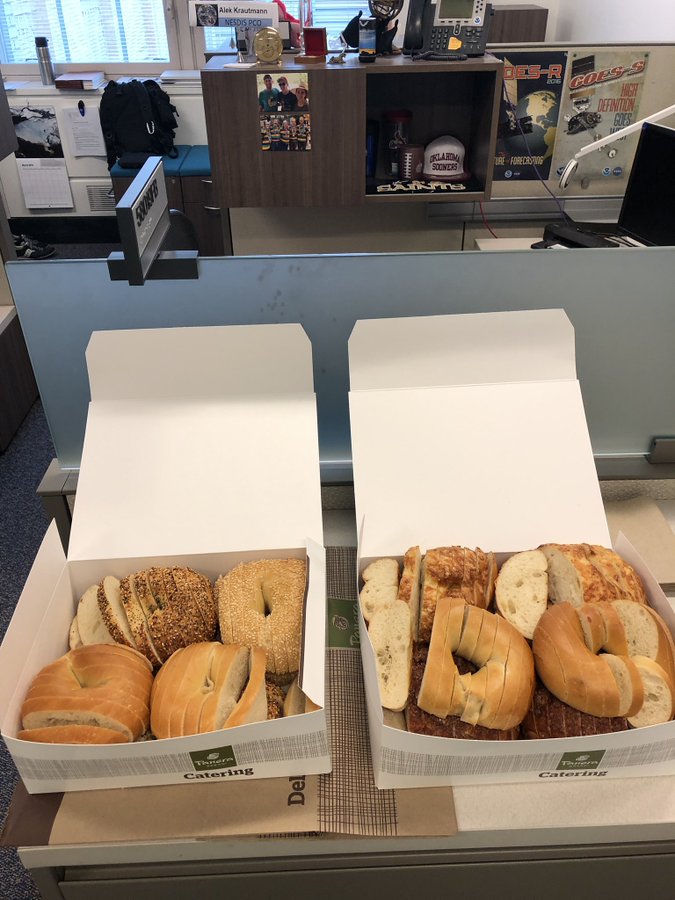 Today I introduced my coworkers to the St Louis secret of ordering bagels bread sliced. It was a hit!

Here’s how Berger defends the bagel blasphemy: Panera introduced bagels in the early to mid-1990s, he said. To entice customers, the restaurants would put bagel samples out on the counter, sliced thinly (like bread) so that customers could have a small taste.

But Berger says customers got into the idea of thin bagel slices, and began asking for their bagels to be cut that way and overlaid with a slice of cheese. And so the bread-sliced bagel was born.

“This was sort of an organic, grassroots kind of thing,” he said. “The cafe managers said ‘sample your product,’ so somebody got creative and sliced it this way and it caught fire. There was not a mandated policy. We sort of grew into it.”

Berger was neighbors with Ken Rosenthal, who founded Panera in 1987 as the St. Louis Bread Co. (which is still its name in that city). Berger joined the company in 1989 as it was opening its third franchise. Now there are more than 2,000 Paneras across North America. Berger and Rosenthal sold their stakes in the company decades ago, and Berger, now 70, is on his way to retirement.

Berger was born in Romania and moved to Israel with his family as a teenager in 1964. In 1970, after his discharge from the Israeli army, he moved to the United States and came to St. Louis because he had relatives there. Nearly 50 years later, he still lives in the area, in the suburb of Creve Coeur.

Rosenthal, who is also Jewish, now lives in Colorado. The two men are still friends.

“I came to Israel with nothing, came to America with nothing,” he said. “By grace of God, I was able to make it.”

Berger himself is not a huge fan of the bread-sliced bagel, but he’s happy that others enjoy it. He recalled a time not too long ago when some Americans weren’t so familiar with the food. Once in 1996, he was traveling through Colorado and stopped at a small town diner. The menu featured a bagel — and described it in parentheses as a “Jewish donut.”

“I personally, probably [prefer] the traditional way,” he said. “You cut it traditionally, two halves. You put whatever on it, and that’s that.”

And he’s enjoyed the Twitter furor of the past couple days.

“I think on the one hand it’s funny, on the other hand it’s silly,” he said. “But it’s better than reading about carjacking and murder.” Losing Is Winning With Aliza Beer