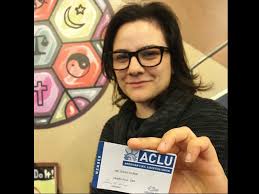 Why would you refuse to condemn those who murder in your name?
By Dennis Prager, FPM

Last week, an opinion piece appeared in The Washington Post that tells you much of what you need to know about the moral fabric and intellectual depth of the ACLU and much of the left.

Written by Rana Elmir, deputy director of the Michigan chapter of the ACLU, the title says it all: “Stop asking me to condemn terrorists just because I’m Muslim.”

Here is how her column begins:

“As an American Muslim, I am consistently and aggressively asked – by media figures, religious leaders, politicians and Internet trolls – to condemn terrorism to prove my patriotism.

Even putting aside her refusal as a Muslim to condemn the greatest organized evil in the world, her misleading rhetoric is revealed by another aspect of the opening sentence.

It is not to “prove [her] patriotism” that people ask her to condemn Muslim mass murder, torture and sexual enslavement. It has nothing to do with patriotism.

Decent people (including many decent Muslims) make this request for three other reasons: One is to ascertain the moral/religious views of that Muslim. The second is to ascertain how widespread Islamist views are among Muslims. And the third reason is to have as many Muslims as possible condemn Islamist violence in the hope that Muslims considering supporting or engaging in terror will think twice about doing so.

It is the most logical request people of goodwill can make when they ask Muslim spokespeople to react to atrocities committed by Muslims in the name of Islam. How else are non-Muslims to assess Islam and Muslims?

If the Spanish Inquisition were taking place today, wouldn’t every Catholic spokesperson be asked if they condemn it? Of course.

But there is a difference. No one would have to ask Christians to condemn mass murder committed by tens of thousands Christians in the name of Christ. Millions of Christians would have already spoken out and demonstrated against such a thing.

Or take Jews’ reactions to the 1994 murder of 29 Palestinian Arabs by a religious Israeli Jew, Baruch Goldstein.

The Israeli prime minister at the time, Yitzhak Rabin, in an address to the Israeli parliament, said to the Knesset:

“You [Goldstein] are not part of the community of Israel… You are not partners in the Zionist enterprise. You are a foreign implant. You are an errant weed. Sensible Judaism spits you out. You placed yourself outside the wall of Jewish law…

We say to this horrible man and those like him: you are a shame on Zionism and an embarrassment to Judaism.”

Even the Jewish Settler Council, of which Goldstein was a member, declared that what Goldstein had done was “not Jewish, not humane.”

Israel’s Sephardi chief rabbi said, “I am simply ashamed that a Jew carried out such a villainous and irresponsible act.” And the Ashkenazi chief rabbi, Yisrael Meir Lau, labeled the murders “a desecration of God’s name” – which is the worst sin a Jew can commit.

The then-chief rabbi of the United Kingdom, Jonathan Sacks, declared: “Such …read more