The MEMRI TV clip shows Morshid at the Gaza “Return March” stating in a religious lecture that “one of the greatest duties… and best forms of worship… is to fight those Jews.” He goes on to state that in order to stop the Jews, the “sword of jihad for the sake of Allah is brandished and they are made an example of,” and adds: “I call upon every Muslim: Do not stand idly by and let those Jews spread corruption… You must carry out glorious deeds against them.”

The same day, YouTube removed this MEMRI TV clip from the channel, with the message: “Video Removed: Inappropriate content.”

YouTube also posted on the page a notification explaining that the video had been “flagged for review” – that is, by YouTube users – and that YouTube had subsequently “determined that it violates our guidelines.” It added, “We’ve removed it from YouTube and assigned a Community Guidelines strike, or temporary penalty, to your account” and warned: “If you receive three or more of one of the types of strikes listed above, we may have to disable your account.” 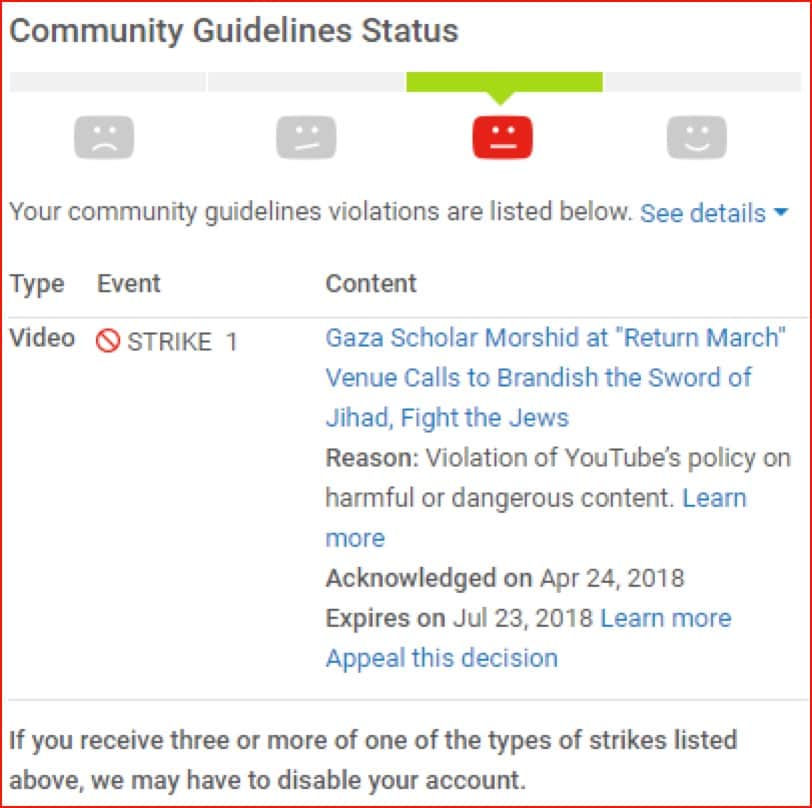 MEMRI appealed YouTube’s decision to remove the clip, explaining that it is an educational resource and part of the research of the MEMRI Lantos Anti-Semitism and Holocaust Denial archives, which exposes anti-Semitism in the Arab and Muslim world and provides informational infrastructure for policies and strategies to counter anti-Semitism.

This appeal was rejected by YouTube, which stated: “After further review of the content, we’ve determined that your video does violate our Community Guidelines and have upheld our original decision.”

It should be noted that at the end of every MEMRI TV clip it is stated: “MEMRI is a non-partisan, independent research institute providing research, analysis, and translation of primary materials covering a wide range of issues, including terrorism and ideological  trends in the Middle East. These video clips are provided as a public service to an international viewing audience to bridge the language gap and better educate and inform. Material about statements by terrorists and extremists is provide to alert the public to threats, and in no way constitutes an endorsement of such activities.”

MEMRI’s previous YouTube channel, which had more than 60,000 subscribers and hundreds of millions of views, was terminated in July 2016; despite MEMRI’s numerous appeals for information to resolve the outstanding issues and to regain access to the account, we were never successful in doing so.

An article published March 2, 2017  by Tablet magazine, “Why Is YouTube Punishing People Who Translate and Expose Anti-Semitism on Its Platform?” highlighted the termination of our YouTube account. It stated: “For years, YouTube has been taking down videos that translate and expose anti-Semitism and punishing those who post them. Perhaps the most notable victim of this censorship is MEMRI, the Middle East Media Research Institute.”

The article went on to describe the importance of MEMRI’s work, saying: “MEMRI translates television and media from across the Middle East, highlighting both bigotry and those activists who seek to fight it.” It also explains YouTube’s flagging system and how an account can be terminated like MEMRI’s was: “YouTube’s system for identifying problematic content relies on users flagging and reporting allegedly objectionable videos. Site staff then sort through the reports and remove content at their discretion. Unfortunately, this process is easily gamed by those bigots and their sympathizers who don’t want MEMRI’s material out there.”

MEMRI is the only organization in the world that comprehensively monitors anti-Semitism in the print and broadcast media, education systems and schoolbooks, and Friday sermons in mosques in the Arab and Muslim world, and produces hundreds of reports and videos on the material it has found. MEMRI’s Lantos Archives on Anti-Semitism and Holocaust Denial are the largest archives in the world of translated Arabic, Farsi, Turkish and Urdu/Pashtu material on anti-Semitism from the past two decades.

It should be noted that in the past, MEMRI has met with YouTube to discuss the issue of jihadi and anti-Semitic content on the platform. MEMRI has done extensive research on this subject, including how YouTube allows U.S.-designated terrorist organizations, among them Hamas and Hezbollah, to maintain multiple accounts – thus violating YouTube’s own Terms of Service and Community Guidelines.

The full report can be viewed at MEMRI here.