(JTA) — Is it possible to play Major League Baseball while being a Sabbath-observant Jew?

It’s a question that could have an answer within the next few years if Elie Kligman, an 18-year-old from Las Vegas, has anything to say about it.

Kligman is considered one of the top high school players in the West and is being recruited by major colleges. The 6-foot, 185-pound senior plays several infield positions and pitches.

But his sports agent father, Marc, thinks his best route to the majors would be as a switch-hitting, strong-armed catcher. Kligman has registered for baseball’s new draft portal, where prospective picks fill out information forms.

Neither the colleges nor the pros have gotten to see much of Kligman on the field over the past two seasons because of COVID, as there have been few games to showcase his talents.

Kligman likely would have accepted a scholarship to college as early as last summer, before his senior year, but now expects to make that decision by July at the latest. (He preferred not to say which schools are recruiting him, but said they are in Division I, the highest rung in college sports.)

Marc Kligman does not expect his son to be picked in July’s MLB draft — but he didn’t rule it out, adding that he believes his older of two sons is ready for that step, even with the COVID obstacles. And if a team makes a good enough offer, Marc Kligman would encourage Elie to take it.

Why does Elie Kligman think he could convince a major league team to sign a Sabbath-observant player, one who wouldn’t be available for as many as two games a week?

The teenager was ready with a quick response.

“Most guys don’t play 162 games a year. If I’m a catcher, not playing three days in the week or two days in the week is pretty normal, so I don’t think it would be that different from other guys,” he said. “I would just be missing different days.”

There would be even fewer obstacles if Kligman made it as a pitcher, with starters going every fifth game and relievers rarely appearing in more than three games in a row.

Marc Kligman said people have reached out to him with instances of pitchers who overcame religious restrictions — Hall of Famer Christy Mathewson had a contract stating that he wouldn’t pitch on Sundays out of respect for his religious mother. Ed Correa, a White Sox pitcher in the mid-1980s was a Seventh-day Adventist who didn’t pitch from sundown Friday to sunset Saturday.

And then, of course, there’s the legend of Sandy Koufax, who sat out Game 1 of the 1965 World Series because it fell on Yom Kippur. 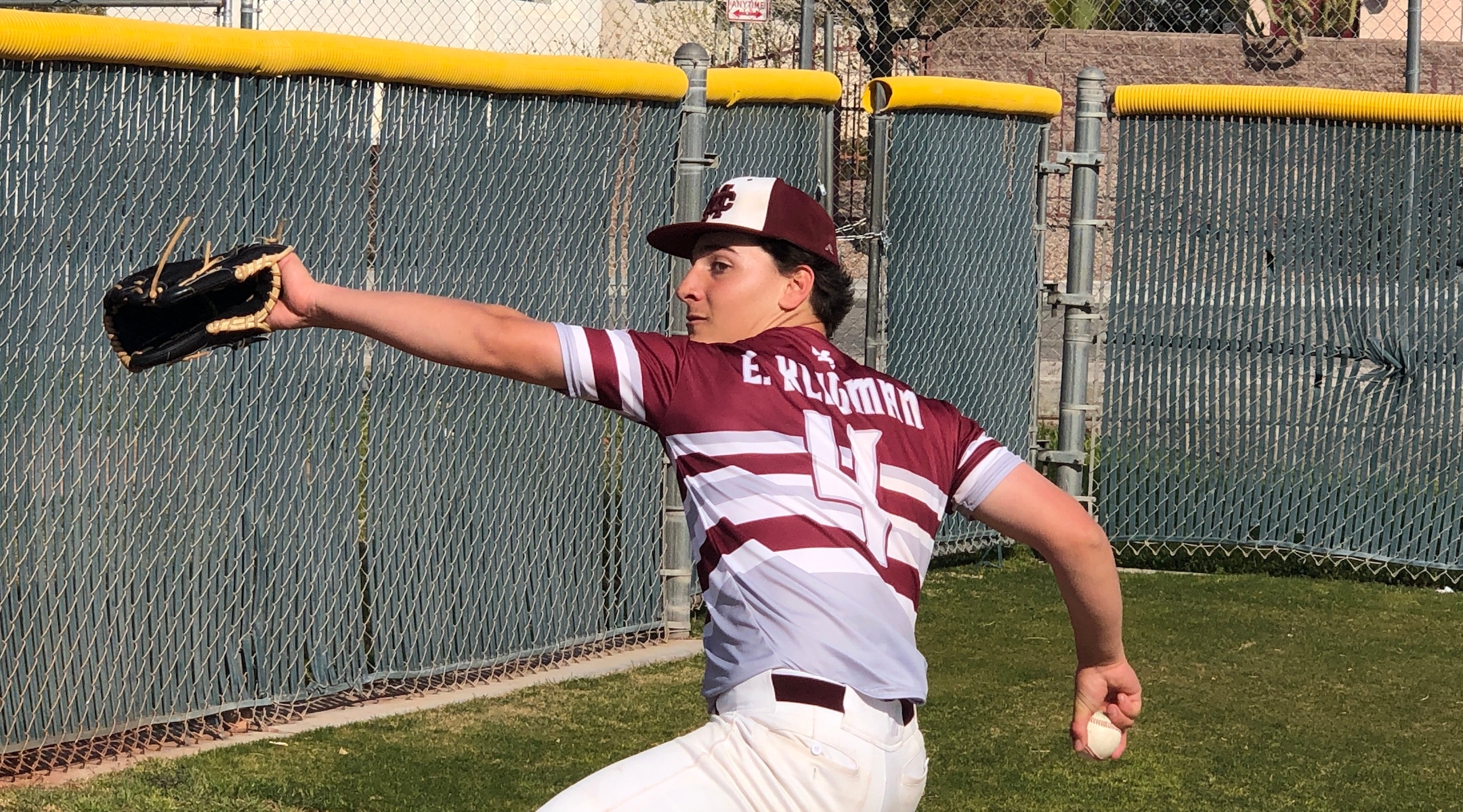 Kligman’s father, a sports agent, says his son has potential as a pitcher or a catcher, which would make skipping games for Shabbat easier. (Courtesy of Kligman)

Kligman, who attends the public Cimarron-Memorial High School online during the pandemic, said playing on Shabbat and Yom Kippur is a nonstarter, regardless of the game’s importance. He has raced to the ballpark after sundown.

“I’ve showed up at games halfway through,” he said.

The decision not to play on Shabbat is a personal and a family decision.

“It’s the way I was raised, the way our family goes about everything,” he said. “Don’t play on Shabbos.”

Teammates, he said, “have been very supportive.”

“They usually ask me a lot of questions, like, what do you do on Shabbos, why can’t you be here, but everyone is super respectful of all the things that I have to follow and what I do,” Kligman said.

Asked how he would classify his family’s Judaism, Marc Kligman said, “Labels are tough. We consider ourselves to be observant, religious Jews. The people that we pray with, and the customs that we follow is Chabad, which is part of the Hasidic movement.”

The family’s Jewish community has been mostly supportive of Elie Kligman in his pursuit.

“The people that we’ve known have always known we’ve been doing this for a long time,” he said. “The support from everybody has been positive, they come to games, they ask me about games.”

Marc Kligman said not everyone is on board, however.

“I think those who don’t understand maybe think this is nonsense, that kids should be studying to become rabbis and teach at yeshivas,” he said. “But most of the Chabad rabbis realize that there are things that Elie and myself can do through the medium of baseball, and what we accomplish to try to bring people closer to Torah and Judaism, that they can’t.

“We’ve had many people reach out to us and ask for Elie to speak to schools, religious day schools, to communities. They’re just all very inspired that here’s a religious Jewish boy with a Jewish first name, Jewish last name, playing baseball, and he’s not compromising, not letting it get in the way. To the vast amount of very observant Jews that’s very inspirational, especially to young kids.”

It only takes one team to make this story happen, Marc Kligman said, noting however that half the pro teams won’t even bother to look at a high school catcher.

Marc Kligman was a high school catcher himself growing up in a Jewish but not particularly religious household in Stamford, Connecticut.

“Gary Carter was someone I tried to emulate,” he said, recalling the Hall of Fame backstop for his favorite team, the New York Mets, and Montreal Expos, among others.

Elie Kligman was raised in San Diego before the family moved to Las Vegas, but he wasn’t a Padres fan.

“My favorite player was Roy Halladay,” he said, recalling the late pitcher for the Toronto Blue Jays and Philadelphia Phillies. “I was watching the Phillies a lot. I was in kindergarten when they won it all [in 2008]. I really liked watching Halladay pitch.” (Halladay was traded to the Phillies before the 2010 season.) 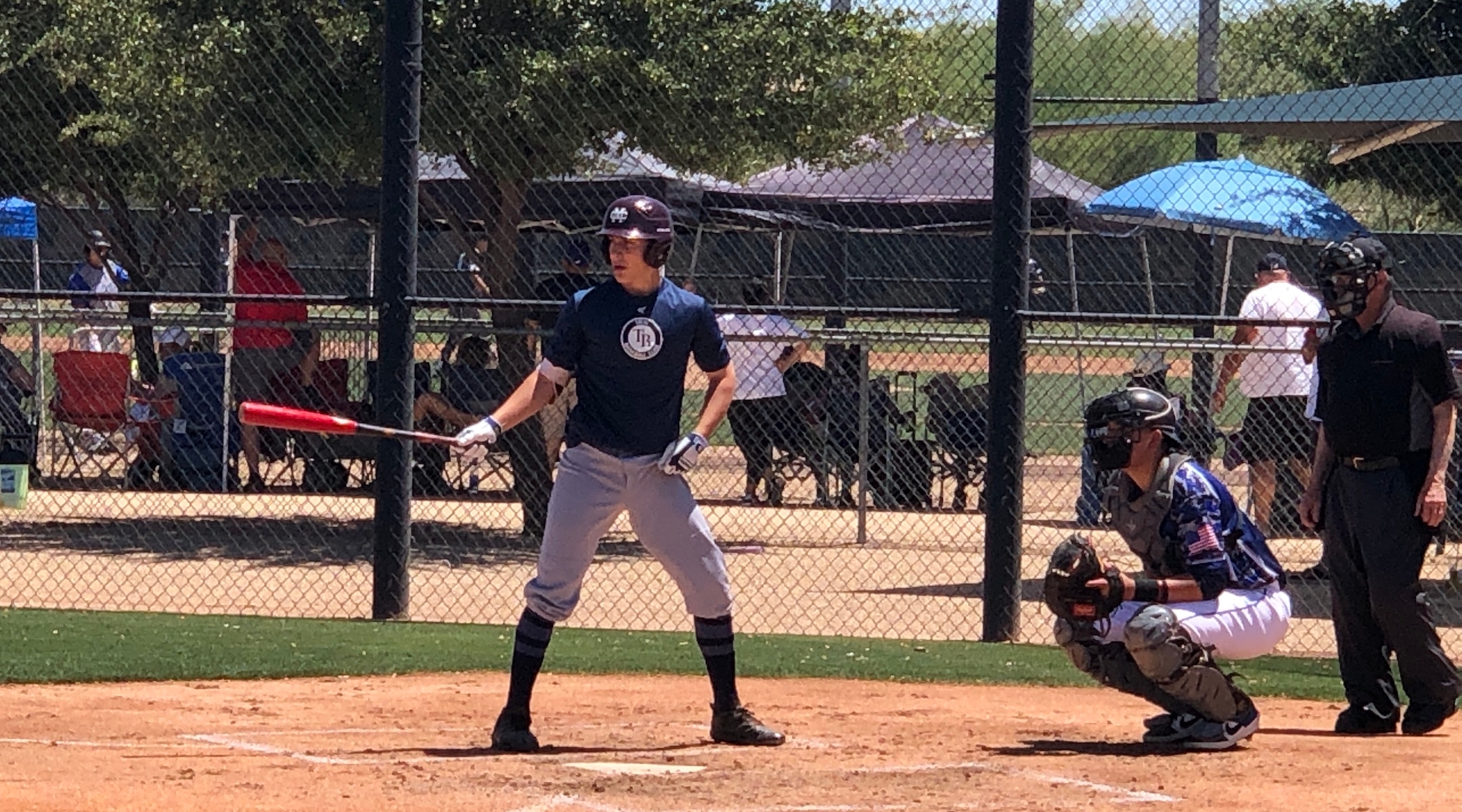 Kligman has emerged as one of the top college recruits in the West. (Courtesy of Kligman)

Kligman got to meet his idol at a Phillies-Padres game in San Diego through a family “friend” — Carlos Ruiz, the longtime Phillies catcher who caught four no-hitters, including two pitched by Halladay. Ruiz happened to be Marc Kligman’s client, and Marc arranged for the meeting.

“It was pretty cool. Our pony league team had gone into a locker room at the Padres stadium,” Elie recalled. “Carlos brought a couple of players in — Placido Polanco, Cliff Lee. When Roy Halladay walked in, it was kinda like, whoa!”

Ruiz remains like family to the Kligmans. While he was unable to attend Kligman’s bar mitzvah — several players did — he was there for younger brother Ari’s coming-of-age rite.

During the recent Zoom interview with the Jewish Telegraphic Agency, a framed Ruiz jersey was visible over Elie’s right shoulder.

“I think Carlos was a big influence on Elie,” Marc Kligman said. “That’s maybe where he got his love for catching. To be a good catcher you really have to love it, it’s too hard of a position.

For now, Elie Kligman said he will play any position a team wants, as long as it gets him to the big leagues. He’ll be playing in showcases and tournaments after his high school season, and there’s a chance he could be working out with players from Team Israel next month and in July. Someday he’d like to play for the Jewish state’s squad.

By midsummer, Kligman will know which path he will take, college or the minor leagues.

Bottom line, he said, the teen knows what he wants to do: “Play baseball.”

Marc Kligman recalled a conversation he had with his son a few years ago.

“He said I’m ready for it. I want to see if we can make it work,” Marc Kligman said. “God first, being observant, religious, understanding the world is created for service to God, and to make the world a better place. Why can’t baseball and being observant coexist?”