(January 31, 2022 / Jerusalem / JNS) Esther Pollard, 68, the wife of convicted Israeli spy Jonathan Pollard, died on Monday at Hadassah Ein Kerem Hospital in Jerusalem. She had been battling COVID-19 and was suffering from septic shock.

The funeral took place at Har HaMenuchot Cemetery in Jerusalem. Thousands were in attendance.

A statement by the Committee for Jonathan Pollard said that Esther, who had breast cancer, caught the virus two weeks ago and was being treated at home at the recommendation of her doctors. Her health deteriorated over the weekend and she was brought in for intensive care at Hadassah over Shabbat.

“Esther, this is not how I expected for us to come home to the land,” Jonathan Pollard said at her funeral. “But as much as you loved the land, the land will now love you and the land will embrace you and you will truly become part of the land you loved so much.”

Pollard described how his late wife was “brave” and fought until the very end, even as she lay sick in the hospital’s coronavirus intensive care unit. Pollard was allowed to “suit up and stay with my wife for the last three days of her life.”

He recalled how in her final hours, he was given two choices: to let her die natirually or let her fight.

“I looked at the doctor and said this woman fought for me for 30 years, I’m not giving up on her,” he said. “I am going to give her the opportunity to do what she does best, which is to fight… This is the loyalty a husband owes a wife, and she sure demonstrated her loyalty to her husband over so many years.”

Rabbi Pesach Lerner, the chairman of Eretz Hakodesh at the World Zionist Congress, who had served as the Pollards’ rabbi, told JNS that “the heart of us all is broken at the bitter news.”

He said that Esther had “literally” dedicated her life to her husband—health, career and personal development.

Lerner called on the people of Israel to come and support Pollard in this difficult time.

Israeli Prime Minister Naftali Bennett said of her death that “I was saddened to hear of the passing of Esther Pollard, a woman whose devotion to, and love for, Jonathan Pollard became a symbol of strength, determination and faith.”

Israeli Interior Minister Ayelet Shaked said that Esther’s devotion to her husband “aroused admiration and gave him mental strength. I am happy that she was able to settle with him in Israel, the land that she loved so much.”

“Some people change the world,” said Knesset member Nir Orbach. “Esther Pollard was one of them. She succeeded in her persistent struggle to help release her husband – a hero of Israel in his own right.” 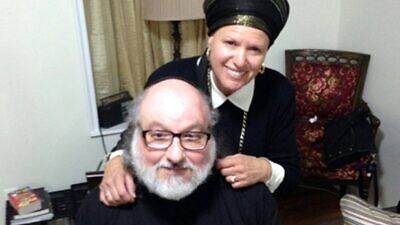 Many others, including Knesset members Yuli Edelstein, Bezalel Smotrich and Itamar Ben-Gvir, also expressed their condolences.

The Pollards were married in 1993 while Jonathan was serving what was supposed to be a life sentence for selling classified information to Israel. He was paroled in 1995, following which he was required to remain in New York City.

The Pollards arrived in Israel a year ago after former President Donald Trump ensured the commutation of his life sentence to the 30 years he had served.

A documentary about Jonathan Pollard’s arrest that will be broadcast on Wednesday on Israel’s Kan news public television has brought his name back into the headlines in Israel.