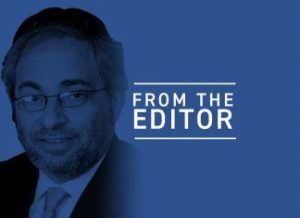 The people in Israel voted for a solid right-wing government, and if newly elected Prime Minister Benjamin Netanyahu can manage to fulfill his commitments, that is exactly what the new government in Israel will look like.

Still, the country itself is politically split, not unlike what we are dealing with in the U.S. Ordinarily there would be very little to report here, as democratic countries, whether the U.S. or England, for example, from time to time vote into office people with different national visions as the society looks for some kind of system to work more effectively and better than the status quo.

That would be fine and good and something that all involved in this laboratory experiment known as Israel and the Jewish people can quickly grow accustomed to. That is, except for one person and one specific matter—Itamar Ben Gvir.

The election of Ben Gvir’s National Religious Party says a lot about where the Israeli mindset is: enough of the indecision and the wishy-washy approach to vital interests that keep Israelis safe. The national decisions are way more significant than the last government patched together by Naftali Bennett, with the possibility of a majority government remaining in power only by the Arab party Ra’am that advocated positions detrimental to the growth and vitality of the Jewish state.

Compared to that year of the failed Bennett government, the new Netanyahu coalition may—at the outset, anyway—be viewed by some Israelis and many in the U.S. government as an entity that is held together by right-wingers and Israel’s religious parties.

This composition of a coalition being arranged by Netanyahu is representative of Israel in a more legitimate and comprehensive fashion than several of the previous governments. The apparent power that Itamar Ben Gvir represents is not an aberration. If nothing else, it is a throwback to the last century, when Menachem Begin’s Likud Party was finally able to put together a government and for the first time in Israel’s history, the Labor Party was forced into opposition.

How was Begin different than any preceding prime minister? Well, firstly, he was an unapologetic defender of Jews and the Jewish state. He was a Holocaust survivor who lost his entire family to Hitler and his minions. The mindset of the surrounding Arab countries that refused to recognize Israel and thought nothing about murdering Jews was not a theoretical concept to him. It was a real and constant danger.

Ben Gvir is compared to Rabbi Meir Kahane, whose style was different in nuance from that of Begin, but in substance they were very much on the same page. Kahane was vilified as a racist, which he was not. Kahane was a truth teller and a Torah scholar, as well as a student of Jewish history, much of which was tragically drenched in blood.

For his part and in order to placate his critics, during the recent election campaign Ben Gvir said more than several times that while he was a student and follower of Kahane, there were parts of the Kahane philosophy that he did not subscribe to. And one of those key issues was the idea that Arab residents of Israel need to be separated from the Jewish population, and if that meant expelling them from the country, then so be it. The Kahane slogan communicating that idea was: “They Must Go.”

Ben Gvir made it clear that he does not agree with that concept. Though, when you flip that idea and look at it from the perspective of the Palestinian Authority, removing all the Jews from Judea and Samaria is exactly an Arab prerequisite to even beginning a discussion about peace. That leaves the question of: What is the difference between expelling Jews and expelling Arabs from a part of the country in which they would like to live freely?

The right answer is that there is no difference between the two approaches. The only difference is that when the PA says Jews need to be removed from Judea and Samaria, the current administration is supportive of the idea. If the idea is floated by a Jewish leader about Palestinians, whether Begin, Kahane, or Ben Gvir, then it’s apartheid and racist.

For this week, here’s the controversy surrounding Ben Gvir, who will be appointed minister of public security in the new government, which means that his portfolio will include directing police policy. The controversy revolves around the anticipation that as minister he will implement policies that include deporting people who undermine the Jewish state, executing terrorists, and giving immunity to police or soldiers who kill Arabs who are seen holding stones or Molotov cocktails even before they throw them.

It’s an awful situation that deserves absolute condemnation when anyone on either side of this 100-year+ conflict is killed or injured. Last week, a 15-year- child and a 52-year-old family man lost their lives because they were at a bus stop on the outskirts of Jerusalem.

It’s propaganda and a distortion of the situation on the ground if you believe that Ben Gvir as public security minister will be too strict when it comes to dealing with the Arab population. It’s wrong to say that he does not value Arab lives. It is a matter of protecting Jewish lives. Waiting for a person prone to terror to throw a rock or a Molotov cocktail that can incinerate a passing car is not a prudent policy that protects people. People have lost their lives from thrown rocks over these many years. Throwing rocks at people is not about teenage mischief. It can be deadly.

The idea that the Biden administration is pushing Israel leadership not to appoint right-leaning political leaders to key ministerial positions is the height of hypocrisy and just absurd. The U.S. support of Mahmoud Abbas is really no different than U.S. support for the Venezuelan dictator, Maduro, or the coddling of the leadership in Iran. At the end of the day they are not fighting terror but supporting it.

The U.S. and the European Union are worried about the new Israeli government. Their concern is that the military and the police will protect Israelis with the full, uncompromising force of the law. They will not allow rocks and bombs to land before determining what to do. They might even extend Israeli law to Judea and Samaria, a move that is long overdue. As Menachem Begin once told a critic of his policies, “I am not a Jew with trembling knees.”