Do you know “why boys only date girls from Prospect?”

Bnos Leah of Prospect Park Yeshiva (also known as BLOPPY) is an all-girls school that was founded in 1954.  The school has been at the cutting edge of girls’ chinuch since its inception.  They were the first all- girls high school to have productions, shabbatons, and all sorts of other things.

WHICH DO WE MAKE THE BRACHA ON?

The question is, when one has a platter of the seven fruits in front of him – which of them do we recite the blessing upon first?

There is a pasuk in parshas Aikev (Dvarim 8:8) that praises Eretz Yisroel for its seven species.

“A land of wheat and barley, grapes, figs and pomegranates; a land of olives that produce oil and honey [of dates].”

These are the seven products of which the land of Eretz Yisroel is praised, and because of that – these seven products have a special and elevated status.  They are also enumerated in a special, yet somewhat complicated, order.

The Gemorah tells us that the word “land” or Eretz, resets the order – so to speak, in terms of which one of the seven we recite the blessing upon first.  So let’s look at this pasuk as having part A and part B.

Part A would be: “A land of wheat and barley, grapes, figs and pomegranates;”

Part B would be:  “a land of olives that produce oil and honey [of dates].”

Based upon the idea that the word “Eretz” resets the count, but that Part A has precedence over Part B of the pasuk – the order of the brachos of the 7 products of Eretz Yisroel would be:

A1a and A1b – wheat and barley, are, according to most Poskim, both part of A1 and wheat has precedence to barley because it is more important.  As far as the other grains are concerned, Spelt is like wheat only spelt differently, and oats and rye are like barley.

The order of the seven products of Eretz Yisroel would thus be as follows: Wheat, barley, olives, dates, grapes, figs, and pomegranates.

So what does all of this have to do with our question of, “Why boys only date girls from Prospect?”  And how is that it is important to know this question, but that it is a non-true assertion?  How could it be?

The answer is that the whole question is a mnemonic device to remember the order of brachos of the zayin minim.  Why stands for wheat.  Boys stands for barley.  Only stands for olives. Dates stands for, well, dates.  Girls stands for grapes or gefen. From stands for figs.  And Prospect stands for pomegranates.

The underlying factor here is the concept of giving a blessing its due honor.  On account of this idea, it should also be noted that if there is an array of any fruits, the bracha is recited upon the whole one first – regardless of whether it is of the seven minim.  If you like one of the non-seven fruits better, then that one gets precedence too.  The fact that it is of the seven fruits is only the third factor – it comes after shalaim (whole) and chaviv (better liked).   A fourth factor (when dealing with HaAitz and HaAdama foods) is the size of the slices.  It is more kavod to the bracha to recite it on a larger slice, all of the other factors considered.

This mnemonic device was created without the permission of Bnos Leah of Propsect Park Yeshiva, and the author apologizes if anyone is offended.  It is just that a brief survey has showed this author that many people are unaware of the actual order of the bracha.  It was thought that this mnemonic device would help increase awareness of hilchos brachos. 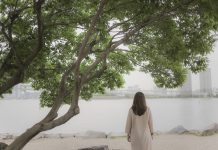